Major Labels Buying Into Soundcloud Sets It Up For Acquisition 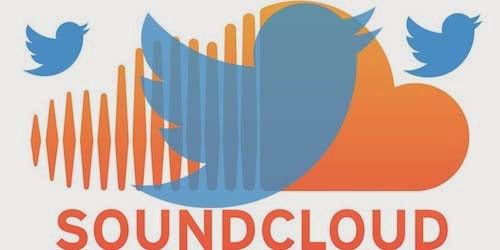 There are multiple well-founded rumors abounding that the three major record labels will soon purchase anywhere from 9 to 14 percent of the Soundcloud streaming music service. On the surface this might seem like a natural progression for both Soundcloud and the labels (who have done this sort of thing before), but there’s more here than meets the eye.

First of all, it’s nothing new for the major labels to invest in a distribution network that they have at their mercy. The majors received a piece of Spotify in the deal that allowed it to open shop in the US, and there are reports that they’re currently pushing for its sale at a price as high as $10 billion (good luck getting that price). Then you have the case of Universal Music, which had a 14 percent stake in Beats Music that resulted in a cool $400 million or so payout when it was acquired by Apple.

These kinds of investments are potentially more profitable than the labels core business, at least in the short term. Streaming services need licenses from the labels to operate; the labels oblige in exchange for some cash and a piece of the action, then cash out when the service is sold to a bigger fish down the line. The best part (at least for the labels) is that most of that money heads to the label’s bottom line. The artists who’s music makes this opportunity possible in the first place do see some reward, but it’s pennies on the dollar compared to what their labels pocket.


So here we have Soundcloud, which has gone from a place where indie musicians can store their song mixes for easy fan playback, to a much larger entity currently filled with cover songs and copyrighted loops and samples. The problem is that the company has no license agreements with the majors in place for this content, and have drawn their wrath as a result. Read more on Forbes.
----------------------------------
Help support this blog. Any purchases made through our Amazon links help support this website with no cost to you.
Posted by Bobby Owsinski at 9:30 PM No comments:

Playing Vinyl With Your Smartphone - The Office Turntable

This is one of the best promo ideas ever. German dance label Kontor sent out 900 mailings that contained a vinyl record in a cover that folds out to become a 2D record player.

There's a QR code to download an app onto your smartphone, which you then launch and line up on the "turntable." The app then shows a virtual tone arm that allows you to play the record.

Kontor found that 71% opened and used the mailing, which was about 64% higher response than usual. The project won the Gold Lion Award at the Cannes International Festival of Creativity. Check it out.

The fact is that Twitter has actually lost influence in the last year while Facebook has spiked. This was no small sampling as well, as the data was collected from more than 200,000 websites with more than 250 million unique visitors.

In order for Facebook to work for promotion, you have to make sure that you include links to where your viewers can get more information. If there's a failing in Facebook posting, that's it. You can't drive traffic unless there's someplace to drive them to!

You can discover more tips on both Facebook and Twitter promotion, as well as other social platforms, in my book Social Media Promotion for Musicians. Follow to link to read some excerpts and receive a free chapter.

Yahoo keeps on trying to reinvent itself, and its latest venture into the unknown involves broadcasting a concert to a computer or mobile device near you. The service kicked off its "365 days of concerts" last week with a show by the Dave Mathews Band streaming live from Veterans Memorial Arena in Jacksonville, FL.

The concert-per-night idea is an effort to establish Yahoo Screen, it's competitor to YouTube. The concerts will be broadcast via it's LiveNation channel, with major stars like KISS, Justin Timberlake, and Usher upcoming, but less popular acts like Chevelle, 311, and Jurassic 5 more the norm.

While this sounds like a great idea and one that both fans and artists have been forever clamoring for, live concerts do present some challenges. First of all, it's difficult to adequately capture the vibe of concert on a small screen (especially on a mobile device). Then it's difficult to get people to watch for an entire concert, especially in these days of persistent multi-tasking.

Another factor is the timing of the concerts, which are broadcast live. A concert beginning at 8PM Eastern is right in the rush hour for the West Coast, which limits the audience. On the other hand, an 8PM West Coast start might be too late for all the Easterners to watch in its entirety.

A potential problem is the fact that the viewer can't scrub the concert timeline, so you're not able to go back to something that you might have missed earlier. Plus, the constant camera cutting can be annoying. It might be better if there was only a static shot.

Of course, live concerts is how radio first started, and concerts have been part of Public Television and HBO from the beginning. We're in a new world here, so it can only improve over time as the concept gains acceptance.

To me, the killer app will be when you're given multiple camera feeds that you can switch yourself. That way you'll have the most pleasing picture at your fingertips. I personally can't wait for the day when there is no more audience shots. 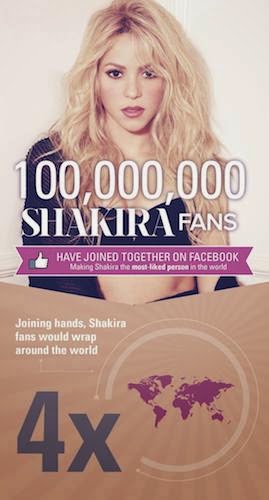 When it comes to Twitter and Facebook, music celebrities rule. There's been a running battle between Katy Perry, Britney Spears and Rihanna in the last couple of years as to who was the most popular, but it looks like Shakira has bested them all, at least on Facebook.

Last week it was announced that Shakira broke the 100 million Like barrier, making her the undeniable queen of Facebook. This represents 8% of the Facebook universe of 1.28 active world-wide users.

It appears that her sudden jump in popularity came as a result of her appearance at last month's World Cup. It was only 5 years ago that the singer sported only 318,000 Likes, but now she has the first celebrity Facebook page ever to break the 9 figure barrier.

While people in the States think that the social world revolves around them, the social media metrics company Socialbakers estimates that only 11% of Shakira's followers come from the US, as compared to 17% for Rihanna and 25% for Eminem.

It's already been estimated that somewhere between 5 and 15% of those Likes are fakes or spam, as high-traffic celebrity sites are prime territory for spammers and scammers to do their work. That said, that's still an enormous number of endorsements for anything and anybody, and shows the power of social media when the situation is right.