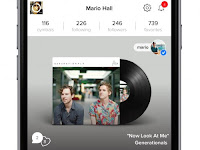 Three undergrads from Tufts University have launched a new app that's catching on like wildfire. It's called Cymbal, and many have called it the "Instagram of Music" because of its less-is-more user interface.

Cymbal describes itself as "music powered by friends, not algorithms." That's because users are allowed to share just one song at a time along with album art.

The whole idea is that the user gets to post that one song that's most important in their life at that moment.

You can share tracks from Soundcloud or Spotify, and since it was created from the ground up as an iOS app (an Android version is coming), it's perfectly at home where more and more do their listening - via the phone.

There's less than a million users at the moment, but the app seems to be coming on strong, so look out for more about Cymbal in the future.

Artists Not Buying In To Apple Connect

Connect is a social feature of Apple Music that gives artists another place to engage with their fans. The problem is that few are doing so.

Music Alley took a close look at Connect and came up with a number of interesting facts. For instance:
Here's a list of the top 20 Facebook music artists and their presence on Connect. The number of times they've posted is in parenthesis.

Apple doesn't do social well and it looks like Connect is headed the way of Ping (if you remember that). One problem is that artists and their social media managers have their hands full with too many options already. They don't need another one.

Record Label In A Box

I don't know if it's a good idea or not to start your own label, but if do and you're in the UK, then Record Label In A Box from the music aggregator Ditto Music could be for you.

You can check it out on the Ditto website, but just remember that most of what they show you applies to the UK. 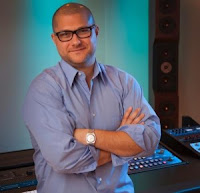 This week's guest on my Inner Circle Podcast is mastering engineer Colin Leonard of Sing Mastering, who's become the go-to mastering guy for uber-mixers like Dave Pensado and Phil Tan. Colin describes how he got into mastering, his unusual and proprietary signal path, and his overall mastering philosophy.

On the intro we'll look at what's becoming known as "Playola," or the practice of paying to be included on an influential playlist, as well as maybe getting an answer to the perennial question "What is the best driving music?".

Pinning Your Tweets For More Attention

There are times when you post a tweet that's so important that you want as many of your followers to see it as possible for as long as possible. There's a way to take that tweet and push it to the top of your profile where it will stay even after subsequent tweets. This is known as "pinning" a tweet.

Here's how to do it.

Refresh your screen to make sure that the pin appears at the top of your profile.

Pinned tweets are not reposted; they're just pushed to the top and will stay there until you unpin them.

What should you pin? How about:
There are tons of other ideas for pinning as well, but no matter what you pin, you'll find it a very effective way to increase a point you're trying to make. 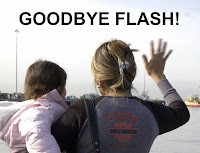 It hasn't been a good idea to use Flash animation on your website for a long time, and it looks like Google is finally trying to put the final nail in the coffin.

Goggle's Chrome browser now automatically pauses any web ads that use Flash. Ads that use the newer HTML5 will continue to work as always, as that's the favored format.

It's been recommended here for quite some time that Flash wasn't something that you wanted to use. First of all, anything iOS doesn't recognize it, so all those iPhone and iPad users never were able to access it.

From a website design perspective, Flash animation died a long time ago. Opening splash pages with lots of animation used to be all the rage but now look very last century.

Worse of all, Flash is a battery hog that compromises the security of your operating system. It's just not cut out for our new mobile world.

That said, advertisers still continue to favor Flash because most of the creative people at ad agencies everywhere grew with Adobe Creative Suite, of which Flash is a part of. HTML5 is more flexible, but it's not as designer friendly.

It looks like this move by Google will now force agency designers to make the switch.

So rejoice that there's one less vestige of the online past as Flash slowly passes into the night.