YouTube Tags: The Key To People Finding Your Videos

One of the things that many people overlook when they post their videos to YouTube are the tags. Often there's not much thought given to them, but you'd be surprised how helpful a few good tags can be, especially when it comes to organic search. Not only that, once someone finds one of your videos, the right tags will make sure that more of your videos show up on the right hand sidebar of related videos. Here's what to do.

1. Make sure that you have at least one tag that's directly related to you. This would mean your name and other variations of it. For instance:

Or if you're a band:

Make sure you tag everyone that's in the video, and add them to the description as well.

2. The second thing you should always think about doing is adding a tag that indicates the mood of the song. If the tune is a sad song, make sure that you add a tag that says "sad song." It's surprising how many people just search for "happy" or "sad" or "melancholy."

These two tips can not only help new viewers find you, but increase the chances that they'll find more of your videos after they've found the first one.

For more YouTube tips like these, check out the Social Media Promotion For Musicians book. You can read some excerpts on the excerpts section of bobbyowsinski.com.

There's been empirical evidence that teens have been fleeing Facebook for some time, but a new study by London's University College now confirms that teens "feel embarrassed even to be associated with it." In fact, to many older teens, Facebook is "not just on the slide, it is basically dead and buried," according to the report.

The Global Social Media Impact Study observed the social networking of 16 to 18 year olds in 8 countries over the course of 15 months. The study found that for that age group, Facebook activity was being replaced by WhatsApp and Snapchat. Of course, Facebook recently purchased WhatsApp for a reported $19 billion in cash and stock, and one has to wonder if this study played a part.

The interesting thing is that teens still maintain Facebook accounts at the insistence of their families in order for them to stay in touch with older relatives, the study pointed out. This is somewhat ironic in that it wasn't that long ago when parents were increasingly concerned about their kids spending time on the network.

Another interesting point was that most teens acknowledged that Facebook is actually better than anything else at things like scheduling parties and observing people's relationships, but opted for the other networks anyway. This proves that slicker doesn't always equal better.


If Facebook is to integrate WhatsApp into its network, it can bring that age group back into the fold, guaranteeing a sustained user base at least for the short term. Say what you want about the service, in this case it seems to have made a strategic move at just the right time.
----------------------------------
Help support this blog. Any purchases made through our Amazon links help support this website with no cost to you.

Why It's Important To Verify Your Spotify Artist Account

Many artists have their music on Spotify, but not many know how important it use their artist account as a promotional tool. The first thing you should do is verify your account. How to do that and why it's so important is laid out in this excellent excerpt from Nicholas David's post called The Complete Musician's Guide To Spotify on his Sunshine Promotion website. Here's just one of the promotional tips.

"In addition to being able to have a pretty blue check mark next to your artist name (see below), there are a few perks to being verified. Whenever you release new music, create a new playlist, or announce an upcoming concert in your listener’s area, followers of your music on Spotify will be notified. If notifying your listeners that you’re playing a show near them isn’t reason enough to get verified, I don’t know what is. Getting verified is easy. Having the patience to wait for their reply may not be…
1. First, you’re going to have to set up a regular-old Spotify “listening” profile for yourself. You can get a free account on this page if you don’t already have one. Create Spotify profile
2. Next, you have to submit your artist profile for verification here: Spotify Verification Request Form
Make sure you have your
Since there are lots of artists trying to make it onto Spotify right now, verification may take longer than usual. I’ve seen it take anywhere from 3 days to 2 weeks. Patience in this step is necessary."
Check out more about Spotify for artists at Sunshine Promotion. 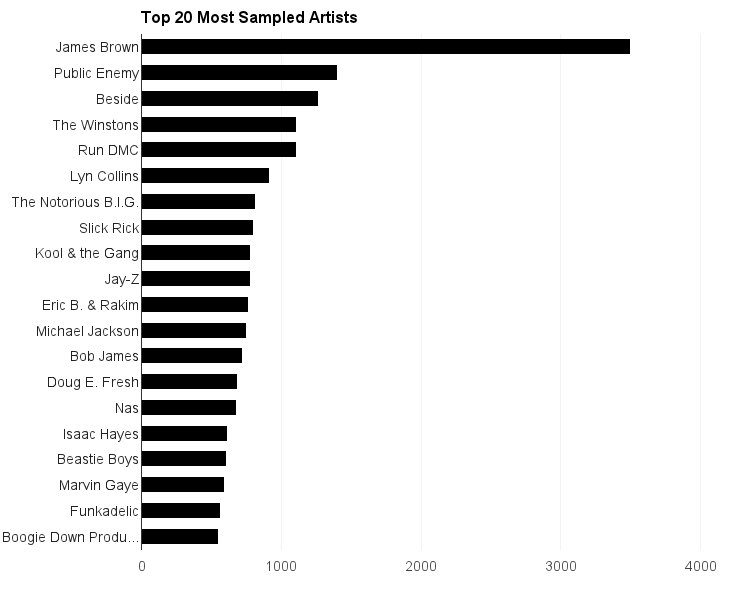 Whosampled.com recently did a survey of over 200,000 songs and found that James Brown was the most sampled artist by more than two times the nearest artist (Public Enemy). While the Godfather of Soul was the godfather before sampling technology came into being, it certainly gave his career a boost towards the end, and now that he's gone, continues to help his publishing royalties.

As you can see from the list of the top 20 most sampled songs, Mr. Brown is the the only artist to have more than one song appear. Many of the artists and songs are a bit of a surprise. 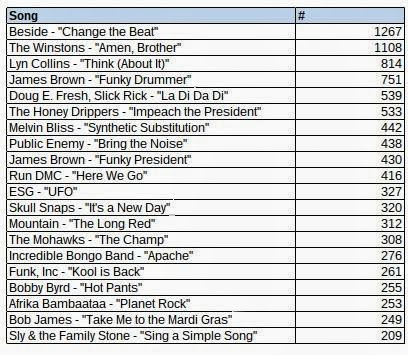 Once again, the beauty of publishing is that it can provide a continued income stream that could revive many times over during the course of a career and beyond. Long after you're gone, the possibility exists that your heirs could still see a check in the mail, with some luck. 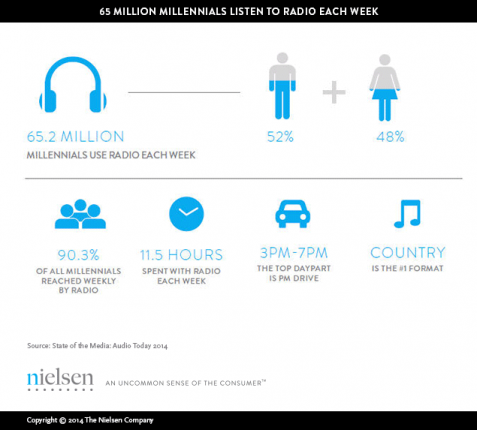 We've heard the claims over and over that Millennials are so wrapped up in new technology online that they don't have time for anything old like television and especially radio. A new survey by Nielsen finds that mostly untrue, at least when it comes to radio.

In fact, it found that 65 million Millennials (age 18 to 34) listen to radio each week, which is about half the people in the age group. That amounts to around 11 1/2 hours of listening per week, which is still behind Gen X at 14 hours and Baby Boomers at 14.5, but it's still far more than was generally thought.

An even bigger surprise is that country is the #1 format that Millennials listen to, followed by contemporary pop and contemporary hits. They're much more mainstream that previously thought.

In general, radio is doing fine and is in no danger of going the way of other older technologies. 9 out of 10 people age 10 and up still tune in per week in some way, which amounts to 242 million people!