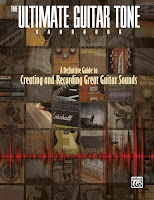 Enter to win a copy of The Ultimate Guitar Tone Handbook.

Click here to learn how to enter.
Posted by Bobby Owsinski at 9:29 AM No comments:

If explained Music 3.0 a few times in the two years I've been writing this blog, but if you're a new reader that hasn't seen those posts, here's a video that shows you just how the music industry got to this place. The information is taken from the Music 3.0 Internet Music Guidebook

Why The Decline In Entertainment Spending Is A Good Thing

I've been accused of being negative lately in my posts and I guess if you look at them a certain way, that's true (sorry, don't mean to be). The fact is that there aren't a whole lot of positive stories around about the music business these days.

Actually, I don't see these stories as negative from the point of view that the sky is falling, and everything sucks and is dying, as much from the viewpoint that the business is in the middle of deep change and evolution. As with life, as one part dies, another is renewed.

That being said, the LA Times ran a story the other day showing how spending has declined in most sectors (not all) of the entertainment business. 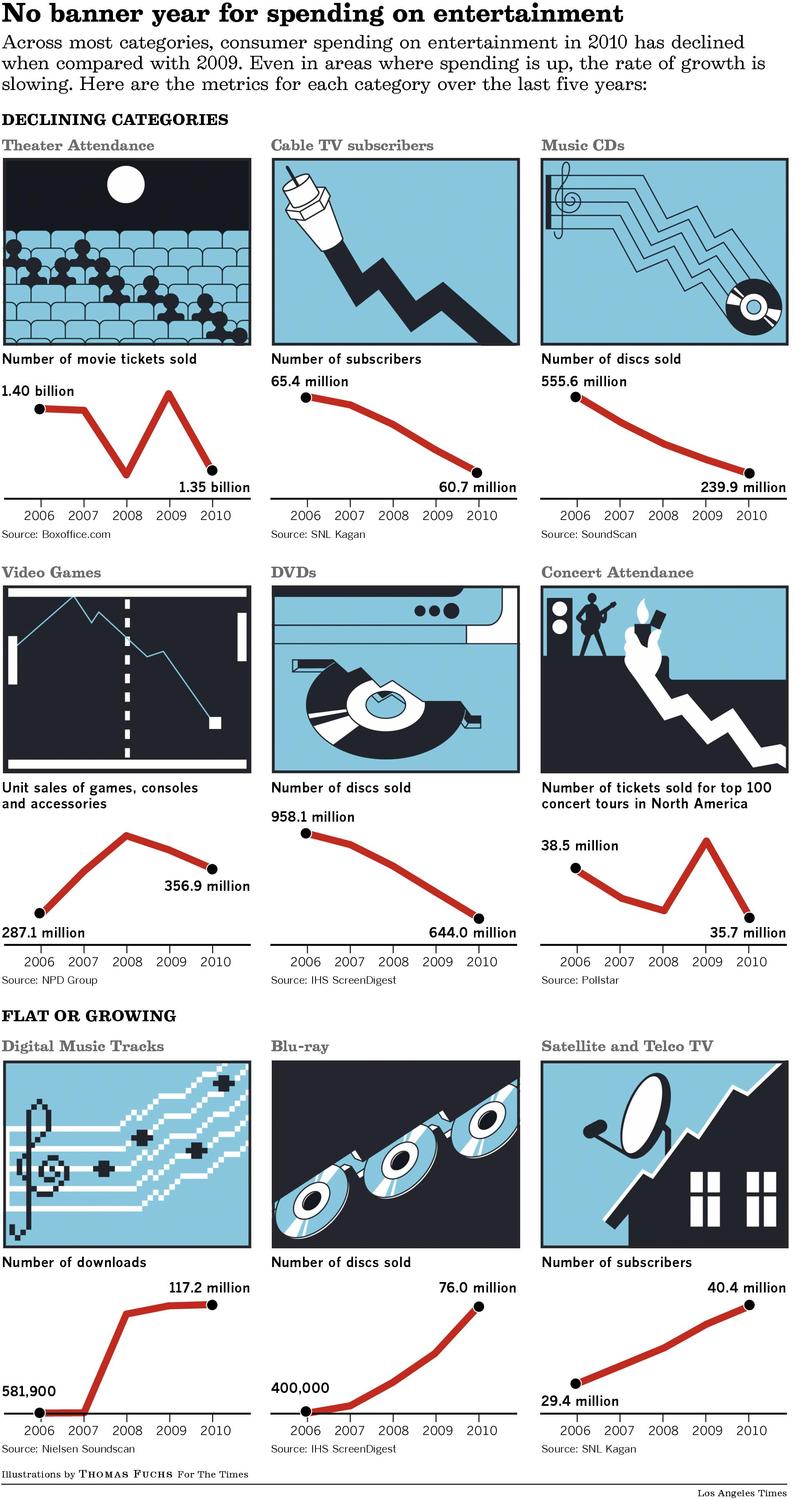 Want to know the positive of the above graphic? Perhaps homogenized corporate entertainment has finally hit the wall.

It doesn't matter what form of entertainment, it has always been at it's most creative and vital when run by passionate fans. Television, the film industry, and the music business have all had their heydays when run by entrepreneurs that truly cared about the product and their customers. It's when those entrepreneurs are bought out by multinational companies and the suits take over that the product becomes watered down in the search for greater and greater profits. Sooner or later the product suffers to a degree that the consumer is no longer an automatic buy and becomes desensitized to the entire genre. Sound familiar?

The numbers on the chart above are actually a good thing. It signals the beginning of the end of an era for many facets of the entertainment industry. Soon big business will want to divest because the profits just aren't what they used to be (if they're still there at all), and we'll be back to an era of fan/entrepreneur/owner. We may not see it happen tomorrow, but we will see it happen eventually. And our entertainment will be much better for it.

The Death Of A&R

The job of A&R isn't what it used to be, and looks to be dying even faster than the major record labels, according to Rich Esra, one of the publishers of The Music Business Registry, a quarterly publication that tracks A&R people and provides their contact information. Rich knows what he's talking about since he used to be an A&R exec himself, working for 6 years at Arista Records.

Rich recently posted some reasons that he thought A&R was dying in the excellent Digital Music News newsletter. According to Rich:

"1) The major labels are hiring fewer and fewer A&R executives because the volume of acts (and more importantly the types of acts) being signed have dramatically decreased.

2) The A&R process used to be about the discovery, signing and nurturing of the act. Today, A&R executives are not looking for talent per se. They are looking for an ongoing business.

An artist that has developed some kind of traction and awareness on their own is what I'm talking about. Today, acts need to be "developed" or at least developing in a business sense for any label to have even the slightest amount of interest. The idea that today's A&R executives will discover an unknown act / artist and develop that artist is an illusion. They have neither the desire, time or money for that matter in 2011.

And by the way, this last point is about to become profoundly illustrated in the next 60-90 days - as dramatic and sweeping changes happen at Universal and Sony (massive layoffs are expected soon).

(3) This is why from an A&R perspective, only the most generic, ubiquitous type of acts get any attention from labels today. There is only a certain type of act these days that major labels are willing to sign."

We've all heard the stories about the meddling A&R guy who knows nothing yet demands that an artist change their music or direction, but there were far more good people employed than bad ones. Someone has to find the next generation of talent just to keep theses companies alive, and without A&R, it's more likely than ever that the major labels will die along with the position.

4 Things To Know About BitTorrent 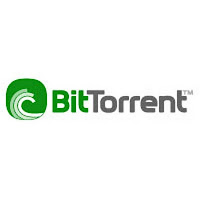 Kyle Bylin had a nice article on Hypebot recently about the 5 things to know about BitTorrent stats. I'm going to repurpose that article a bit for this post in order to make a few points. If you don't know what BitTorrent is, then you're probably not illegally file sharing or moving large amounts of data, but it's a peer-to-peer file sharing protocol for distributing large amounts of data.

That being said, if you're a content creator or owner of any kind, BitTorrent can be one of your worst nightmares as your work can be freely distributed to anyone anywhere if they so choose. Here are a few things you should now about the service.

1) BitTorrent has over 100 million monthly users. That includes over 20 million active users that download over 400,000 files daily. That does not include what may be up to a couple million unofficial clients.

3) BitTorrent still makes most of its money from its toolbars. This means that unless they figure out a different business model, they're leaving a lot of potential money on the table since there's really no other way to take advantage of this massive amount of traffic.

4) Surprisingly enough, the highest searched for music item was only #47 of the most searched items (that was Eminem). All of the top 10 searches where Hollywood movies. People may be still downloading your music, but I would worry a lot more if I were a film studio, although that doesn't say too much for the popularity of music these days, does it?

What does this all mean?
A) People still are willing to pay to a quick and easy user experience.

B) Music is in trouble because people are beginning to feel that it's not worth stealing.

C) BitTorrent makes a lot of money but it's not the huge cash cow that it should be, given the amount of traffic that it has. Services like this have a tendency to be bought for their technology, or disconnect from their audience to find a new business model, so don't be surprised if one day BitTorrent isn't there anymore or becomes something else.

Some Social Media Ideas From NAMM

While most musical instrument manufacturers that exhibited at the recent NAMM show in Anaheim where hip to social media and had their mailing lists, Facebook pages and Twitter feeds, most didn't utilize their exposure to 10's of thousands of people at the show.

That being said, there's was one distributor that did an excellent job of utilizing social media and that was Loud Technologies, distributor for Ampeg, Crate, EAW and Mackie, among others. Here's what they did. 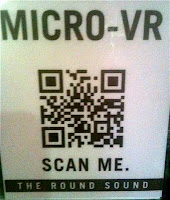 First of all, every tag identifying a product carried a QR code (like seen on the left), which linked to to more detailed online info if you had a QR scanner app in your phone. A QR code is essentially a real world web link that's designed somewhat like a barcode. Scan it with your phone and it will call up digital information from an analog source.

The other thing that Loud did was to take advantage of the power of Facebook by setting up 4 iPads. If you logged onto Mackie's (or Ampeg's) Facebook page and registered a "Like," you became eligible to win some Ampeg or Mackie products. 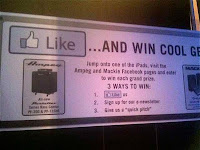 How can you use this if you're an artist?  You can make a sign with all of your Facebook, email and Twitter details to hang at your gigs and merch booth. You can make your own QR code by going to qrcode.Kaywa.com that takes them to your website.

Just having the social presence isn't enough sometimes. You have to let people know about it and make it easy for them to find too.