Vinyl gets a lot of hype these days and you have to admit that it's a great success story. Here's a format that's basically dead in the water that suddenly rises from the ashes to find new popularity. On top of that, it's been growing by about 20% every year for the last 5 years.

That said, below is a chart that puts vinyl sales into perspective. It shows what sales were at their peak, and what they are now on the rebound. Many thanks to Paul Resnikoff at Digital Music News (you should read it). 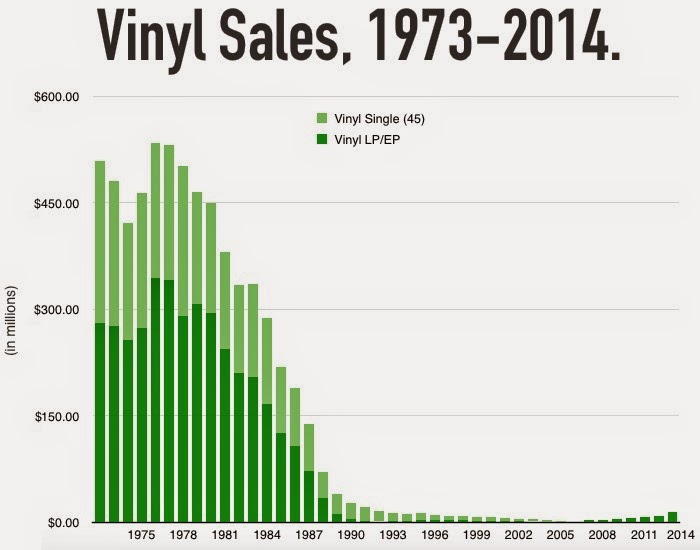 Who's Buying Music Today vs 10 Years Ago

A recent survey by MusicWatch looked at the demographics of CD and digital music buyers back in 2004 and compared them to 2014. What they found shouldn't be too surprising, because it's almost exactly what you'd expect.
Of course, all this may be moot in a few years as both CDs and digital downloads face ever diminished sales. It's still a huge part of the business in terms of revenue, but the writing is on the wall that streaming music will be the dominant distribution method for some time to come unless a new distribution technology is introduced that takes the industry by storm.
Posted by Bobby Owsinski at 9:30 PM 1 comment:

Vinyl.org - The Netflix Of Vinyl

Here's an interesting idea that's sort of a cross between a record club and Netflix, but it deals exclusively in vinyl. In fact, it calls itself the "Netflix of vinyl." It's called vnyl.org, and for $15 a month they'll send you a stack of vinyl records tailored to your tastes.

First you choose the category that you're interested in, and the service curates album choices for you and sends you a stack. If you choose to keep any of the records, it will cost you $8 to 12 each. If you don't want them, pre-paid envelopes are provided to send them back.

The site is in invite-only beta mode right now, and while it sounds like a great deal, expect for it to see a lot of scrutiny as an illegal rental model. If you take notice, any vinyl or CD rental services that have popped up in the past have been quickly beaten down for breaking copyright laws.

It's legal to try before you buy, but you can't rent with an option to buy, so just how vnyl.org plays this will have a lot to do with if it succeeds or not.

Still, any service that gets more vinyl into the hands of consumers can only be a good thing for artists, as long as it's legal. Check it out at vnyl.org (check the spelling - it's vinyl without the "i").
Posted by Bobby Owsinski at 9:30 PM No comments:

Gamers really love Twitch, the leading video platform and community that allows them to broadcast, watch and chat about gaming. Many even consider it the center of the esports industry. That said, it's a huge platform that's somewhat underground unless you're an active gamer.

A big problem that viewers have had is that many times the audio in a gaming video would be muted because of the copyright laws regarding the music. In other words, a video of someone playing a game would violate the music copyright of the game because the video didn't have the rights to play it.

Needless to say, watching a video without the sound isn't remotely the same experience so Twitch has done something about it by making a library of 500 royalty-free songs available to play when that situation occurs.

The library leans towards EDM and features songs from both Skrillex and Steve Aoki's record labels as well as many indie labels. Aoki already has a relationship with Twitch, having performed the platform's first live concert in 2014.

Twitch, which is now owned by Amazon, plans to make music more prominent in the future by adding a new Music category for performances, and has even entered into an agreement with Beatport to host a channel.

YouTube went through a similar a similar problem with its Content ID feature before granting blanket licenses from major labels to video creators, and Twitch now hopes that the library will get around the same problem just as seamlessly.
Posted by Bobby Owsinski at 9:30 PM 1 comment: 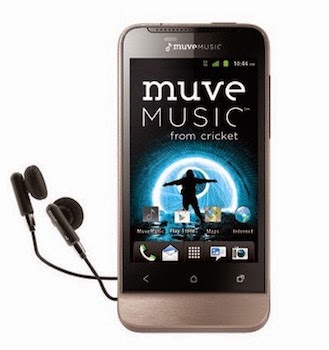 Chances are if you ask a typical music lover if they know about the streaming platform Deezer they’ll reply, “Who?” Even though the French company seems to be the only service to seriously battle Spotify for streaming superiority in Europe, it’s still little known in the North America, although the fact is that it only launched here last September.

That said, Deezer now becomes the #2 streaming platform in the US in terms of paid subscriptions with its recent acquisition of Muve Music from AT&T subsidiary Cricket for an undisclosed amount. Deezer will now add 2 million new paid subscribers to go along with the users in its Elite tier (although that number is undisclosed as well). As a reference point, Spotify currently has approximately 6 million paid US users.

What’s interesting is that Deezer actually seems to have a real market strategy in place, as opposed to most of its competitors. Muve now becomes the service’s entry-level tier at $6 per month, which is far enough below most other platform’s usual $9.95 to make a difference to a potential subscriber. If a customer wants talk radio or podcasts, the company offers a free app from Stitcher, other recent acquisition. Finally, Deezer offers high-resolution audio with its up-market $19.99 Elite tier, a distinct feature not found on most other platforms.


While Spotify has increased its paid subscriber base substantially in the last six months, much of that can be attributed to huge discounts in all of its paid tiers. Many analysts feel that its $0.99 Holiday promotion had the biggest impact on its subscriber surge, and wonder how sustainable those subscriber numbers actually are after the trial period has ended. A bigger question might be how many of them might be willing to try Deezer and if the difference between the services is sufficient enough to make a user want to jump from one to the other. Read more on Forbes.
Posted by Bobby Owsinski at 9:30 PM No comments: