Sometimes we assume some things about the Internet that just aren't true. We think that it's a tool primarily for the young, but that's not necessarily so. This became a personal revelation when my 80 year old father found my parents new home by surfing the web. No realtor, no word of mouth, and none of the traditional tools, just a browser.

Briana Kerensky crunched some numbers from 19 different social media sites, including Facebook, LinkedIn, MySpace, Twitter, Delicious and StumbleUpon, to come up with some surprising numbers in a post on Pingdom.com, that verify that it's not teenagers and young adults dominating the social media sphere - it's their parents. The following is from Briana's post.

1. A quarter of social media users are between the ages of 35 and 44. According to Pingdom, people of middle age are the most "social" age group out there, because they were the generation of people in their 20s when online social networking took off in the mid-1990s.

3. College-age people do not dominate any particular Web site. Pingdom's study revealed that no single Web site is the premiere choice for today's 18-24 year-olds.

4. The 17 and under crowd dominates Bebo. The only social networking site to have any kind of grip on the under 30 group is Bebo, which has an average age of 28. On Bebo 44 percent of the users are below 17 years of age. Owned by AOL, Bebo offers many of the same benefits as Facebook, but with more options to personalize profiles. It also offers space to promote music and original written works. Myspace also had a young group of users, with 33 percent being under 17.

5. Senior citizens have not caught on to social media yet. Folks aged 55-64, and 65 and over, are not heavy social media users. Pingdom attributes this stat to various factors, including seniors' lack of technical prowess and interest in the Internet. There's also the fact that social networking sites tend to be pretty time consuming for users. The older generation, which wasn't raised with home computers or phones with Internet (and got along with life just fine) just isn't used to using the Web as frequently as others.

6. Classmates.com has the largest amount of older members. Classmates.com had the largest number of users over the age of 65, at 8 percent. Another 78 percent are over the age of 35. Classmates.com, which has been on the Internet since 1995, allows users to find, connect with, and keep in touch with people from throughout their lives. While it may just sound like a more nostalgic version of Facebook or MySpace, in 2008 Nielsen Online rated the Web site as number three in unique monthly visitors. In the United States and Canada alone, there are 40 million active Classmates.com members.

All this doesn't have a lot to do with music except for the fact that you can't assume anything when it comes to the Internet and social networking. Knowing your audience is still of prime importance.

Posted by Bobby Owsinski at 9:25 PM No comments:

Why The Controlled Composition Clause Hurts Artists In The Pocketbook

Here's a great video from New York entertainment attorney Wallace Collins describing the two copyright arrangements (performance and mechanical publishing royalties) that keep the music business churning. What's even better, he describes the Controlled Composition clause that severely limits the mechanical royalties that an artist who writes his own songs gets.

This is a clause that not well-understood, but Wallace does a great job explaining how it works as well as the possible negotiating strategies with a label. Yes, it's legal, but it's easy on the ears as the explanation is very simple and straight-forward.

Heath Close posted a great video on his In The Box Production blog called "Monitoring Your Online Presence."

It has some great tips for finding out who's writing about you or your band on Facebook and Twitter. While you still can't beat the granularity of Google Analytics, Stat Counter, Youtube analytics or Tynt Tracer for your website and blog, Heath's techniques give you a pretty good idea of exactly what your penetration is in the most widely used of the social networks, albeit without the precision of the fore mentioned tools.

Posted by Bobby Owsinski at 9:00 PM No comments:

The Sellaband website described in yesterday's post has been off-line for the last 3 days. Now it appears that the company has been declared insolvent, which is the Dutch equivalent to bankruptcy (Sellaband is a Dutch company).

There's no word on what will happen to the funds raised by Public Enemy and other bands through the site, which could spell bad news for both bands and investors. Sellaband now seems to be one of those great Internet ideas that just can't be monetized. Too bad.


In other news, Rolling Stone Magazine's website has also been down for a few days, but speculation is that they let they're name registration lapse because of the error message that's displayed. Whether that's the case or not, it's a good lesson to every artist and band that owns their own website - always keep up with the name registration. Once it lapses, it may be tough to get back.
Posted by Bobby Owsinski at 8:02 AM No comments:

Sales Awards For The Decade 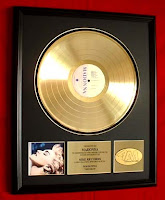 Recently the Recording Industry Association of America (RIAA) released their tally of the decade's highest Gold and Platinum award achievements. About the most interesting thing about these totals is that most of the sales came in the beginning of the decade when CD's were still selling. Still, there are some impressive numbers on the list. I wonder what these totals will look like in 10 years?

October 22, 2004 - Digital Single award introduced. 45 titles were included in the initial group of certifications, encompassing tracks from each major recording company and representing nearly every genre in music

Fan funding a recording was a hot topic the past couple of years. So much so that a website called Sellaband was launched as a way of facilitating the funding and a number of acts actually met with some success as a result. Indeed, 43 bands reached their funding targets through the site, with 35 of them set at the $50k mark and another at $60k, although most have been in the $10 to 20k range.

While raising funds from your fans might be a wise strategy for financing your next album, not everyone is successful, mostly because there's insufficient incentive for the fans to open up their wallets. The once mega Public Enemy is a prime example. The group was trying to raise $250,000 for recording and marketing a new album, and in December was 28% of the way there with $71,000 pledged. Since then, however, the fund has actually slipped to $67,400 instead of increasing.

Even though PE has been far more successful than any other band on the site in terms of total money invested, they're still unlikely to hit their target and here's why.

The problem here is that the "exciting incentives" aren't really that exciting. You pay a relatively high price for not a lot in return. Perhaps they think that they don't have to offer more because they're a well-known entity, but it appears their fans have spoken with their lack of participation (or an example of a campaign done well, check out Josh Freese).

2) The average investment per donor is pretty low at an average of about $75 per each of their 901 investors. Most other acts average well beyond 100 bucks, with some approaching 200. Again, there's not much of a benefit for the investor at almost any level so there's no enticement to throw a lot of money at it.

3) Sellaband doesn't have much in the way of tools to market much beyond their particular network, and PE hasn't had a good enough social networking campaign to continue to reach out to potential investors.

In fact, PE could've used their fame for a dynamite marketing campaign, but if the following video is an example of what they'e doing, it was doomed to fail.

How could you make a video trying to raise money without adding any details? There's no steak and no sizzle.

4) It's hard to be sympathetic to a band asking for money who has a member that's all over television in commercials and reality shows. If Flavor Flav is so famous, why doesn't he finance it?

The lesson here is that for fan financing to work, they must feel like their getting something special at any investment level. Bang for the buck is just as important in this arena as in any other.