Spotify Up To 28 Million Paid Subscribers 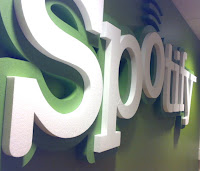 The music industry received some good news recently when Spotify announced that it had surpassed 28 million paid subscribers at the end of 2015. In June it announced that it was up to 20 million, so a jump that steep in only 6 months shows that consumers are indeed onboard with paying to have their music streamed.

Last week Apple also announced that it was up to 11 million paid subscribers, which means that the industry has recently made great strides towards the 100 million goal that so many industry experts perceive as the point where streaming music begins to overtake the erosion of revenue from falling CD and download sales.

One of the reasons that Spotify's numbers have increased may be because of its educational tier, which charges students just $4.95 per month instead of the normal $9.95.

Many in the industry have long thought that $5 was the magic price point for consumers, but the major record labels have been reluctant to allow that during their licensing negotiations.

Regardless of the price, it's good to hear that paid streaming is finally catching on in a big way. This can be nothing but good for artists and songwriters in the long run, even though it might seem that the payouts are low now.

And by the way, streaming has just about totally killed piracy, which again, is a giant plus for the industry.

Many artists and bands use Google's Hangouts On Air to engage with their fans. This includes everything from mini-concerts to online meet and greets (I use it as part of Webinarjam for my webinars), and while it was reliable, there was always a question with its audio quality, especially when it came to music.

Google has now rolled out Hangouts 7.0, and while it has a number of cool features, the main upgrade is that it now uses a peer-to-peer connection, or P2P, between Hangout users who are on the call.

The reason is to make the calls more efficient, and as a result, take the audio and video quality up a notch to generally improve the experience.

Previously, the call would go through Google's servers, and while the company has what many consider one of the most robust backbone's in the world, the connection was always as solid as you'd expect, hence the move to P2P.

One of the potential downsides of using the P2P connection though is that each user's IP address is revealed, which means their location could be discovered and their privacy compromised as a result.

There's talk that the P2P feature may be selectively disabled in the future, but that's not the case at the moment.

So if you're a Hangouts users, enjoy the new features and increased quality. If you live in an area where you'd like to protect your IP address and privacy, maybe it's better to use another platform for the time being.

iDigic has an excellent post with a great infographic containing bits of advice from 31 Instagram experts. You can check it out here, but below is a summary of what they feel is important to use the platform to its utmost.

1. Have a pre-load strategy. Before you begin posting, know who you're trying to engage, how often you'll post, the number of times of day you'll need to do it, and the times.

2. Provide value. You need to post content that your followers find useful or engaging, but also reinforces your brand as well.

3. Communicate with your followers. The most critical part of a good Instagram strategy is engaging your followers. Contests are a great way to do that. Commenting and sharing photos of other Instagrammers is another way.

4. Relevant hashtags are critical. Hashtags are as essential on Instagram as they are on Twitter, but you must treat them strategically. Find the appropriate hashtags for your feed and then use them consistently.

5. Build a community. Followers have to feel like they belong to your community and identify with your brand. The best way to do this is to repost their pictures, which shows that you're willing to engage them, and be sure to reply to all their comments.

6. Treat it as a unique environment. You need your account to stand out and the only way to do that is by treating it differently from your other social media platforms.

Check out the full article here.

If you're in the music business you've heard how increasingly important merchandise is to the revenue stream of an artist.

My guest on this week's Inner Circle Podcast is Patrick Mahoney of Manhead Merch, who's going to tell use about how merch licensing deals work, as well as what the hot merch is these days.

In the intro I'll discuss how Warner Music and Sony Music plan to give back at least some of the profits to their artists if and when Spotify goes public. I'll also give some tips for setting up that cool mastering compressor plugin that you probably have but were afraid to use.

Bandpage, the app that allows artists to monetize their followings, has been acquired by YouTube for a fire sale price of $8 million.

The app allows artists to set up a store and syndicate it to numerous social media and streaming platforms.

Bandpage started as an app to create a special tab on an artist's Facebook page, and had about 32 million users when Facebook shut that feature down in 2012. The company reportedly lost 90% of its traffic in 3 months.

The app then disconnected from a single platform, instead allowing artists to syndicate their pages or stores to most of the artist-friendly platforms available instead.

The company claims to have over 500,000 users, among them superstars like Beyonce, Bruce Springsteen, Christina Aguilera and Justin Timberlake.

Investors had poured over $32 million into the app, so a sale of only $8 million is somewhat surprising. It should be interesting to see how YouTube integrates it, especially now that the YouTube Red service has launched.

Despite Reports, Don’t Look For Pandora To Be Acquired Anytime Soon

Is Pandora really up for sale? If it is the timing is extremely curious.

Pandora was said to have begun talks with Morgan Stanley to help it find a buyer, according to an initial article by the New York Times, although the talks were deemed preliminary and had no guarantee of a deal. If you look deeper into the company’s pros and cons, a sale looks a lot more fantasy than reality though, at least in the near future.

Where’s the match?
There are only a handful of deep-pocket companies that might take a even cursory glance at a Pandora acquisition, but most are not a good fit. For instance, Google’s name is frequently mentioned as a possible Pandora suitor, mostly because of the synergy with it’s ad network, since most of Pandora’s revenue comes from ads. That said, there’s really nothing about Pandora that Google doesn’t either already have, or can’t get for less money.

Apple is another that doesn’t need what Pandora has to offer. It already has the same infrastructure for its iTunes Radio, and chances are that most of Pandora’s subscribers are already iTunes users. There’s not much that Apple would find attractive.


iHeart Media could probably find a space for Pandora among its current online radio properties, but the company reportedly has a huge amount of debt and would find it tough to swing a sale that would probably cost it around $2 billion.

Some think that Samsung might be a fit based on the company’s need to keep up with Apple in the smartphone market. The problem is that it already has a similar service in its Milk Music which hasn’t gotten any traction in the U.S. Pandora could instantly give it that traction, but to what end? Does the addition of an on-board music app make that much of a difference to the average smartphone buyer? In a word, no. Samsung would be better off pouring that $2 billion or so into R&D than adding a music app that could be obsolete in the blink of an eye.

Then there’s Amazon. I’ve been predicting for the last year that Amazon would be the next deep-pocket company to enter the streaming music market in a big way, as it’s basically there already with its Amazon Prime Music service for its Amazon Prime members. Reports have recently surfaced that the company is getting ready to introduce a mainstream streaming service not tied to Amazon Prime, and Pandora could actually be a useful addition if that were the case.

Read more on Forbes.
Any purchases made through our Amazon links help support this blog at no cost to you (just click here).
Posted by Bobby Owsinski at 6:00 AM No comments: