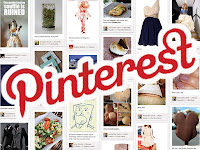 One of the fastest growing social networks online, Pinterest is now the third-largest behind only Facebook and Twitter, with users pinning images just as much as they're tweeting. Unlike other networks though, Pinterest is equally popular with different age demographics. Although at one time it had a larger difference in gender mix than any other of it’s social counterparts with five times more women pinning than men, this is changing rapidly as both men, businesses, and brands discover its features and reach. Here's an excerpt from my upcoming book Social Media For Musicians about how artists, bands and musicians can use Pinterest as a promotional tool.


"Pinterest allows you to save and categorize images of things that you like (called “pins”) even when you’re browsing . The process of selecting or uploading a pin is called “pinning.” You pin things to folders that have a common theme called pinboards or “Boards,” which can be either public or “secret.” Every time you pin something, it shows the link of where the pin came from, which can be a good way to get traffic if you pin your own site’s graphics. You can follow people and use keywords and trending item hashtags just like Twitter. You can also link your account to both your Facebook and Twitter accounts so that when you pin something, it simultaneously publishes to those networks as well if you desire.


There’s a lot more about Pinterest than meets the eye. Here are some additional hints and ideas for using Pinterest.
Social Media For Musicians, which is all about using social media for promotion, should be available by the end of the month. For excerpts from my other books, go to bobbyowsinski.com.

The Next Era Of The Music Business

Regardless if you're a musician or music consumer, your music life is about to change. Slowly but surely digital music distribution has been evolving from downloads to streaming, but that transition has been really picking up speed over the last 12 months. With Spotify leading the way thanks to reams of publicity, more and more consumers are finding that the joy of renting music beats owning it by a long shot.

While it's been long rumored that Apple has their own streaming service up their sleeve, several developments reveal the change that is about to come.

First is the fact that Jimmy Iovine's Daisy project (named after the first computer generated song) just received a $60 million injection from the likes of Warner Music Group's owner Len Blavatnik, Fort Worth billionaire Lee Bass and Australian financier James Packer. This is a serious investment by some deep pockets that know what they're doing and don't like to lose. Then comes word that Apple's Tim Cook recently took a meeting with Iovine to be briefed on the project. Does that mean a collaboration? We don't know, but at the very least, Apple has a good working relationship with Iovine, since he was one of the first to sign Universal Music onto iTunes back in 2001. Together they'd be a powerhouse, a true 1200 pound gorilla. Chances are that Apple will chose to go it alone and just stay at 800 pounds though. It doesn't need a partner, but if there's something there worth buying, they have lots of money.

Then comes word that Google has been quietly making deals with all the major labels for their own YouTube-based subscription streaming service to be launched later in the year.

If all this were happening a couple of years ago we would've looked to only one of these prospective services to be left standing at some point, with the others falling by the wayside. But this is a different time, with the streaming business far more mature thanks to the likes of Spotify, Pandora, Rdio, Slacker, et al. It's now probably possible that all of these new services survive if they're at least half-way decent in their user operation and offerings.

This is definitely going to be a big win for consumers, with nearly an unlimited selection of songs available for a relatively small monthly fee (not sure what the price point will end up being, but $9.95 keeps being mentioned). Consumers are quickly seeing the advantages of renting their music.

It will be a different story for artists and songwriters however. By now everyone knows how little the royalty can be from a stream, with stories abounding about income lost by the writer and artist. Although a full transition to streaming will be a godsend for the labels, with steady monthly income actually bolstering their bottom line, you can bet that not much of that will trickle down to the artists - at least at first.

It's not going to happen overnight, but within a matter of time, you'll see the entirety of the management and law categories of the music business devise a better way to get paid, and eventually force the labels to fall in line. And when that happens, it will trickle down to the DIYers who insist on doing it their way. To what degree this all takes place, we'll have to wait and see.

While this blog is aptly named Music 3.0, we're about to see the next stage of the music business. Welcome to Music 3.5!

There's a new concept about our current state of online content that's been making the rounds called "Content 4.0" which breaks down nearly anything online into 4 major elements:
The idea is that we have to have all 4 in order for someone to respond to our content, which could mean anything from a Like to a purchase. Here's an interesting infographic that provides a number of examples of each element. 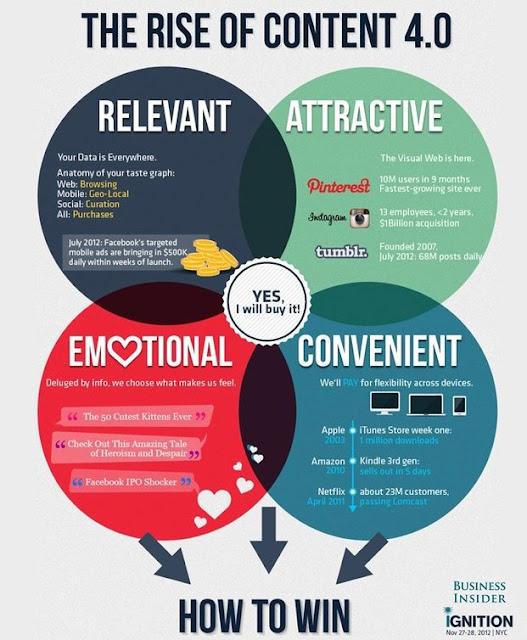 The Art Of Asking

Love her or hate her, Amanda Palmer is the poster child for Music 3.0, where social media is at the heart of an artist's interaction with her fans. Regardless how you feel about her, you can't argue with her success.

Here's a video of AP's presentation at the recent TED 2013 conference entitled "The Art Of Asking," and it outlines her basic strategy. Fair warning - it's a lot more human than you might expect, and received a standing ovation from the normally jaded and tough TED audience.

The Major Labels Go From 3 to 4 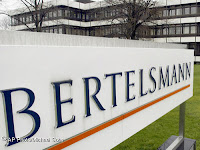 One of the former major players in the music business is back in the game. In a deal announced late last week, German multinational media group Bertelsmann has purchased the remaining 51% of BMG (Bertelsmann Music Group) from investment group KKR, bringing the company full circle and back into the recorded music business.

This is a big deal in that the Big 3 major record labels are now actually expanding to 4. Who could've even conceived that such a thing could ever happen, especially in these days of corporate consolidation?

BMG had been a major player in the record business for 30 years when it decided to sell of it's recorded music business to Sony Music and Universal Music Group starting in the mid-2000s. The company then transitioned into a "rights management" company by buying numerous publishing catalogs with partner KKR. Over the last couple of years, the company has made overtures to return to the business by making offers to purchase a number of record label assets, including those of Warner Music and EMI, but lost out on both accounts. In fact, it was only a couple of weeks ago that BMG purchased Sanctuary Records, home of Black Sabbath, Iron Maiden and Megadeath, from Universal.

That said, BMG has a new-found commitment to be in the recorded music business, and that's a good thing. More competition in this world is just what's needed when it comes to developing new talent and new industry blood.

The other thing that's attractive is that Bertelsmann is privately owned, with 80.9% owned by a private foundation and think tank founded by the Mohn family, with the family directly owning the remaining 19.1%. There's a wonderful freedom when you're not beholden to stockholders, Wall Street and quarterly reports.

The company said it's going to be aggressive moving forward, and this can only be positive for the music industry as a whole. Let's hope they bring in some fresh new forward thinking execs that know the ways of the Music 3.0 world instead of living in the past.