The Lesson Behind Rebecca Black Pulling "Friday" From YouTube 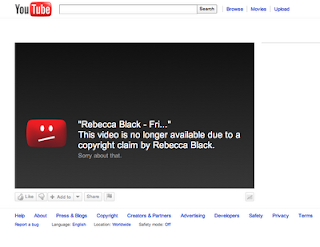 ” video is no longer available on YouTube. No great loss there, but what is intriguing is that apparently the video was pulled due to a copyright claim filed by Rebecca Black herself. While it’s not exactly clear what's behind this, the video had amassed 167,370,534 views before it was taken down.

The second interesting piece to this is that ARK Music Factory, the company that produced the song and video, had experimented with a $2.99 YouTube rental earlier this week. From a sales perspective, this was about 150 million views too late, but that's not the point. Regardless if you like or abhor the song, there's a bigger lesson here.

Just a little background: Rebecca's mother paid ARK Music Factory $2,000 to produce the song and video. As these things go, no one expected anything other than a vanity release with a few thousand views if she was lucky. Much to everyone's surprise, the video blew up, went viral and was quite the rage for about a month or so, although more for the general awefullness (is that a word?) of the song and video than anything else.

Now here's where the business part of it gets intriguing. If ARK/Rebecca had the presence of mind to set up as a YouTube affiliate after they saw it blowing up, it's possible that about $100,000 could have generated from adverts (which is a pittance for 150 million of anything). It's also rumored that there was about 300,000 digital sales of the song (although there's no way to verify that), which would've brought in about another $200k. The big question is - who got the money?

This is where the lesson comes in. Was the $2000 Rebecca's mom paid ARK a buy-out? If so, what did it buy out? Who owned the song? Who owned the publishing? Was there even a contract that stipulated any of this? Did ARK or the Black's try to get around a signed agreement?

Without knowing any of the details, on the surface it seems like ARK wanted to generate some last minute revenue so they slapped a $2.99 rental on. The Blacks, unhappy with their end of the payout, retaliated by filing a copyright claim to take the song down. YouTube doesn't necessarily care who owns the rights; all it cares about was that someone claimed copyright infringement, so they play it safe by taking action, so the song came down.

So the lesson? This is a highly unlikely scenario that probably won't be repeated for a long time (at least in this fashion), but it's always, always, always best to have these things worked out ahead of time just in case some unforeseen success occurs. Establishing ownership of any intellectual property up front is by far the least painful scenario in any creative venture - even one as far fetched as Rebecca Black's "Friday." You've been warned.

Should Lip-Syncing Videos Be Illegal?

One of the things that non-musicians love to do is make videos where they lip-synch to their favorite song. And it's not just kids either; there may be as many 30 year olds as 8 year olds doing it. While this all may seem innocent enough, it's actually a copyright violation, and the new U.S. Senate bill 978 would toughen the copyright laws and make it illegal to upload lip-synced videos.

Just as an example, this kid has over 40 million views for his lip-sync of Katy Perry's "Teenage Dream


Up until now most record labels would let a lip-sync like this one slide or at worst issue a take-down notice where YouTube or the posting service would delete it. However, the new bill would take the penalty a new level, like up to five years in prison, even if you're not making any money!
There are several schools of thought on this:
* From the record label: "This is a copyright violation. They're illegally using our song without paying us."
* From the Music 3.0 artist: "This is great promotion. Fans like my song enough to make like they're singing it."
* From the fan: "I'm just having a little fun. I'm not making any money on this and I'm not hurting anybody."
Which one do you agree with?
-----------------------------------
Help support this blog. Any purchases made through our Amazon links help support this website with no cost to you.

Recently I had a discussion with a friend about exactly where the money goes when iTunes takes their fee from a sale. For each $0.99 song, it's estimated that Apple pays $0.70 to the major labels (which is over 85 percent of their sales), and $0.60 to $0.65 to independent labels. This means that the average price per song is approximately $0.69, of which Apple keeps about 30 cents from every sale.

This might seem like a huge amount but what everyone forgets is that this isn't pure profit; Apple has costs too. There are network fees, transaction fees, and general administrative expenses associated with operating the iTunes Store. It's believed that the network fee is about $0.05 per song, which includes the delivery fee and the hardware and software to facilitate delivery, and the operating expenses are a little less than $0.05 per song, based on the relatively small number of Apple employees that are believed to work on iTunes.

That leaves the biggest and most overlooked cost of all - the transaction cost. This is the amount that the bank charges for the privilege of using a credit card. It's believed that when iTunes first started this cost was as high as 24 cents per sale, which left Apple with a mere penny or two of profit for every sale. It's now believed that they've brought this cost down to about a dime, which still leaves a profit of about 10% (or 10 cents) on every sale, which is far below what the perception is.

The point of all this is that transaction costs are frequently overlooked when doing business, and they are the secret expense that eats your profit. If you take credit cards for merch and music, I guarantee that's it's costing you way more than what a giant like Apple can arrange.

All credit cards charge you multiple fees. First of all, there's a monthly transaction that's a minimum of $20 (usually more), a "gateway" fee of between $5 and $20, and a monthly minimum transaction total. Slip below that total and you're charged a penalty.

Then there's the transaction costs per sale, which can go from $.20 to as high as $.35 (it's usually higher for an Internet transaction), plus a charge of between 1.5 and 3% of the total of the sale. Add all that up and it means that if you only make a dozen or so song sales a month, you've actually lost money. Even if you've met your monthly minimum, you still may be only making less than half of a $1 sale thanks to the transaction costs involved.

Hopefully these transaction costs will soon come under control as micropayment fees become more widely available. This is were the traditional bank costs are bypassed, and  only a small fixed fee per transaction is paid. Paypal has recently instituted a system of micropayments, and I've written about more about other possibilities in other blog posts. Check out my recent post of Square for a good example of this type of fixed transaction fee.

So be aware of your transaction costs in order to be sure that you're earning exactly what you think. 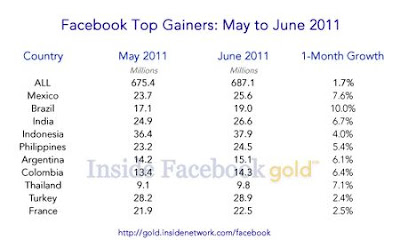 Facebook is supposedly getting ready to go public in early 2012, but it can't come soon enough if the numbers from Inside Facebook are correct. It appears that even though world-wide Facebook numbers are surging towards 700 million users, the numbers are dropping in the US and Canada.

It seems that the United States recently lost nearly 6 million users, falling from 155.2 million at the start of May to 149.4 million at the end of it, which is the first time the country has lost users in the past year. Canada also fell significantly, by 1.52 million down to 16.6 million, but the United Kingdom, Norway and Russia also all posted losses of more than 100,000.

All of these countries were first adopters of the social network, and could also be the first to shed users to another network (just what is not apparent yet). The site notes that by the time Facebook reaches around 50% of the total population in a given country, growth generally slows to a halt, which is what's apparently happening. As you can see from the chart on the left, there were a number of countries that gained users, but these were all developing countries.

What does this mean? Facebook isn't going away anytime soon, but there are some people that either can't see the point or just plain don't like it. That's always been the case, it's just that it's been a little more so last month. If we see the numbers trend like this for a few more months then we'll know something big is happening, but for now, it's Facebook business as usual.

10 Ways Musicians Can Use QR Codes

It took some time but QR codes look like they're finally catching on. If you don't know what a QR code is, it's the symbol on the left, and it's actually an analog web link. Just scan it with you phone or iPad and you're sent automatically to the webpage.

Recently Bruce Houghton over at the great Hypebot blog posted the 10 creative ways that musicians can use QR codes. The original article is here.

----------------------------
Inspired by Clyde Smith's Guide To QR Codes For Musicians, I wondered about how indie musicians might use these scanable graphics that link the offline and online worlds. Marketer and artist Erica Glaser had already created a strong list of 50 creative uses for QR codes that's geared to filmmakers and visual artists as much as musicians, but she provided the spark that led to my own list of 10 Creative Ways Musicians Can Use QR Codes:

Posted by Bobby Owsinski at 9:36 PM No comments: