I'm Appearing On The Waves Everything Audio Show 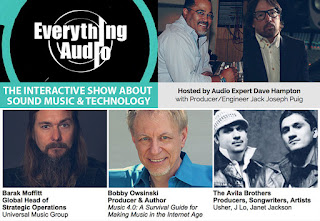 We'll be talking about the new business of music (or the new music business, depending upon how you look at it), and you'll get some great insights as well as some answers to some Twitter questions.


Any purchases made through our Amazon links help support this blog at no cost to you (just click here).
Posted by Bobby Owsinski at 4:46 PM No comments:

On A Positive Note - Music Sales Up Around The World 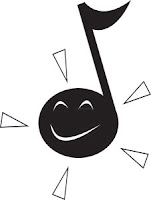 While we're used to hearing about the gloom and doom in the recorded music industry, it appears that the first half of 2015 has actually been a bright spot in sales.

At the halfway mark in the year, many countries that had previously seen their total sales slip recently have actually recorded increases, and all of it has come from digital music.

Germany, Italy, Sweden and Norway have all seen their CD sales drop by varying amounts, yet their total sales have risen, with streaming revenues rising to the forefront, according to Nielsen. The US and Canada also saw sales increase, although total revenue figures haven't been released.

One of the trends that mostly continues downward is what's known in the industry as Overall Album Consumption (OAC). It's increasingly turning into a single song world as more and more people abandon not only album purchases, but listening via streaming as well.

Interestingly enough, OAC is down in most countries, but actually increased by 14% in the first half of the year in the United States. No definitive reason has been sited, but the feeling is that the figure will even out by the end of the year, yet still stay in the positive range.

What do these figures mean? It means that more and more people are paying for music. Where many consumers previously got their music for free either through piracy or via a free streaming tier, an increasing number are turning to streaming subscriptions.

Now with Apple Music finally launched, and with YouTube's Music Key around the corner, we should see additional increases by the end of the year. My prediction - we'll be surprised at how much the industry has grown at this time next year.

A Soundcloud Subscription Tier Is Coming

It's been rumored for months, but it looks like a subscription tier for Soundcloud will soon be a reality, as the company CTO recently confirmed.

While the exact details haven't been revealed yet, it's believed that the service will offer a free tier with a capped number of streams and downloads per month, and a paid tier where both are unlimited.

One of the challenges is changing current users into paid subscribers, since the service has long touted itself as a free service. In fact, Soundcloud has used that as a selling point from the beginning.

The company is currently under pressure both from investors to make money, and from the major labels pay royalties, however, so it looks like this will be changing soon.

That said, Soundcloud hasn't been entirely free for some time, as it offers both Pro ($6 per month) and Pro Unlimited ($15 per month) tiers for creators that want increased storage and analytics. 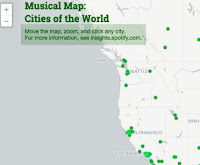 Spotify recently did an analysis of its users to find out which songs were being played the most in each city. The results are pretty surprising to say the least.

Needless to say, tastes are very different in just about every region of the United States, which when it comes down to it, is really a good thing.

Check out the map for yourself.

Thanks to Jesse Jaye for the heads up.
Any purchases made through our Amazon links help support this blog at no cost to you (just click here).
Posted by Bobby Owsinski at 6:00 AM 3 comments:

In a dispute that's reminiscent of what happened with MTV in the 1980s, the 3 major labels are considering removing videos of their most prominent artists from YouTube, according to various reports.

Out of all streaming sources, YouTube pays the lowest royalty rate and the labels are looking for what they consider a more fair split (it's currently 55% labels/45% YouTube).

The platform has long been a source of frustration for the majors, since YouTube has a firm grip on the ad policy, sales channel and monetization and the labels have very little say.

Perhaps throwing fuel on the fire, YouTube recently announced that the number of advertisers increased by 40% last year, with the average spend up more than 100% over a year ago. What's more, YouTube's revenue was over $6.6 billion last year, but the music industry only saw about $150 million of that, according to the RIAA. YouTube disputes that figure and states that it's really "in the billions," although no hard figures are given.

While the majors are quietly increasing their support of other platforms like Vessel and Snapchat, they're being careful about removing support from YouTube just yet. The platform is still where most people consume music (especially new music), and it still provides a significant source of income.

Plus, with YouTube's Music Key subscription service around the corner, that income could possibly increase even more, although most top level label execs are skeptical.

However it shakes out, this bears watching.