Yes, you read the title correctly. 2009 US music sales hit an all time high according to Nielsen SoundScan, with total sales of over 1.5 billion, up 2.1% over 2008.


Despite reports of the album's demise, the format sold 373.9 million (which is still a very substantial figure), but individual digital track sales are even better with more than 1.1 billion in 2009, up 8.3% from 2008 .

Nielsen also reports that 89 digital songs exceeded the 1 million sales mark in 2009, compared with 71 songs in 2008. Not only that, 2009 marked the first time a song broke the 4 million sales mark in a single year, which happened by not one, but four singles -- "Boom Boom Pow" and "I Got a Feeling" from the Black Eyed Peas, Lady Gaga's "Poker Face" and Flo Rida's "Right Round."


Sounds pretty good doesn't it? But the devil is in the details. Of course the number of sales were up, but that doesn't mean revenue was as well, and industry growth is definitely slowing. Album sales dropped another 12.7% from the previous year, which is not a figure that the industry wants to hear, but digital music is still on the rise as it accounted for 40% of all music purchases in 2009, up from 32% in 2008. That being said, digital album sales made up 20% of total album sales in 2009.

What can we take from these figures? Music is still extremely popular and although it's a business in decline, it's still enormous. Of course it's changing, but it's not going away any time soon.
Posted by Bobby Owsinski at 9:17 PM No comments:

You can read the post for more details, but here's what he suggested:

1) Improve your Facebook Page with ReverbNation’s MyBand. MyBand allows your page to be more unique than the standard Facebook fan page.

3) Reward Increased Engagement with FanBridge. FanBridge does one of the things that I've been advocating in my Music 3.0 book, allows you to engage your fans from a single place. Makes your online life easy.

4) Build and Share a Digital Album Package with BandCamp. BandCamp is a publishing platform that goes beyond streaming and allows you to create a self-contained package.

5) Measure It All with Band Metrics. You don't know how well your doing until you can measure and Band Metrics is a measurement tool designed especially for artists and bands.

Check out Zach's post and check out Mashable, which is a great aggregator of all things social.
Posted by Bobby Owsinski at 9:16 PM No comments: 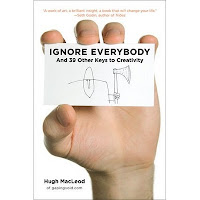 A few weeks ago I received an email from industry provocateur Derek Sivers with an unusual offer. He would send me a book from either Seth Godin or Hugh MacLeod (Derek loves books on marketing), and if I received any benefit I would write something about it. I'm a big fan of Seth Godin and if you've read my Music 3.0 book, you know that Seth's ideas play a big part of it. But I've never read Hugh MacLeod, until the book from Derek arrived in the mail the other day.

Hugh's book "Ignore Everybody - And 39 Other Keys To Creativity" is a very quick and enjoyable read, and as Derek predicted, really spoke to me.

I think the over-riding theme of the book is, "If you have an idea that you really believe in, don't ask anyone for advice or their thoughts, just go for it." It's too easy to get discouraged by even your friends and family, because they have a vested interest in keeping their relationship with you just as it is. You've got to understand that if you put your time in, you have a chance at success, but those relationships inevitably will change.

I've seen it happen myself several times over the years. When I first got a gig with a successful touring band, I had a friend tell me how much I'd changed. I didn't think my attitude towards him or anyone else was any different, but it was true, my life had changed but not in the way he thought. I was really tired from all the traveling, and under a lot of pressure from recording and not feeling very good about my parts. How can anyone else who hadn't been through the same thing appreciate that? I was a bit aloof because I was feeling depressed about how things were going, but that was interpreted as something else completely.

Then when I started to get a little success working with major and minor music celebrities, I had friends that no longer called me because they thought I was too busy and they didn't want to disturb me. Busy yes, but disturb me - of course not! This still goes on to this day.

This is not an uncommon occurrence unfortunately, and people with far more success than I've had have been going through these things for ages. I think that what surprises you when it happens is the fact that you're not ready for it. Hugh's book points out that you should expect a relationship to change the moment you have an idea that you intend to act on, because your friends like the status quo better than what might happen if you succeed.

Hugh's next point that got to me was "Don't quit your day job" If you're a musician, or anyone in the arts for that matter, you've heard this one forever, but Hugh has slightly different take on it.

Yes, keeping a "day job" doing something other than the thing you love may not be what you want, but that happens even when you have some success and the thing you love to do really does become your day job. Every artist is forced to choose between what's in their heart, and what they have to do to earn a living. Actors take a Hollywood blockbuster with a feeble story so they can still act in independent art films. Painters take commissions from wealthy patrons so that they can spend time on that inspiration that will never go anywhere. Musician's take a high paying gig they hate so they can spend a few weeks working on their own music. This illustrates a point that I'm fond of saying, "Art is something you do for yourself. A craft is something you do for someone else." Hugh just said it another way.

There are at least 5 additional points made in "Ignore Everybody" that I really liked, but I'll leave them for another post. If you're a creative person in just about any artistic or technological discipline, Hugh MacLeod's "Ignore Everybody" is a book that you should check out.
Posted by Bobby Owsinski at 8:17 PM 3 comments: 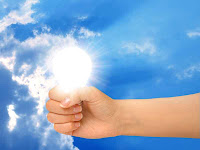 Here are some great tips on how to stay creative from the Marketing Essentials International blog. It's a good positive way to start the new year, although it seems that everyone is already pretty positive (maybe hopeful is a better word). Even though I found this on the MEI blog, I seem to remember seeing them on Seth Godin's or Derek Sivers' as well. Regardless of who created the list, it's still pretty good advice.

1. The best way to get great ideas is to get lots of ideas and throw the bad ones away.

10. Visualize your problem as solved before solving it.
Posted by Bobby Owsinski at 9:05 PM No comments: