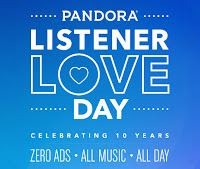 Pandora has announced that it will celebrate it’s 10th anniversary on Wednesday September 9th with a day that’s free of ads for its freemium tier. While many will look at what’s being called “Listener Love Day” as a nice gesture to celebrate a decade in business, there may be more to it than meets the eye.

While a day without ads might give Pandora’s freemium listeners (who make up 95% of its active users) a sample of what the premium paid-subscriber tier is like, it can also be viewed as an all-out effort to get at least some of those users to finally buy in.

Pandora currently has about 250 million subscribers but only 80 million are active, according to the company’s own numbers. Of those, just around 4 million, or 5%, have chosen the $4.99 per month ad-free premium tier (and many of them subscribed at the previous $3.99 level). This ratio has been surprisingly steady throughout its history, and the service hasn’t proven that it has the ability to up the conversion rate.

What’s even more out of balance is that those 5% of paid subscribers are responsible for just over 20% of Pandora’s revenue for the first half of 2015, according to the company’s Q2 financial statement.

In comparison, Spotify has around 75 million users and about 20 million are subscribed to the paid tier, which is more than 26% of active users. Those subscribers are also willing to pay twice as much at $9.99 per month. Read more on Forbes.
Any purchases made through our Amazon links help support this blog at no cost to you (just click here).
Posted by Bobby Owsinski at 6:00 AM No comments: 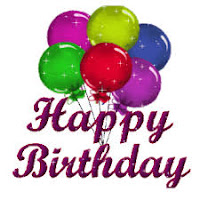 If you ever wondered why the "Happy Birthday To You" song that you grew up with is often replaced with some lame version in restaurants, television and movies, it's because the song isn't in the public domain. Its copyright is owned by Warner/Chappell Music, which collects about $2 million a year in royalties from its use.

There have been numerous lawsuits over the years claiming that Warner/Chappell didn't actually own the copyright, but all were defeated. But some new recently discovered evidence might turn the tide the other way and return the song to the public domain.

A librarian at the University of Louisville found the only known copy of "Good Morning To All," the song written by Louisville natives Mildred and Patty Hill and published in a children's book in 1893. The manuscript for the book was donated to the library in the 1950s but not cataloged.

Warner/Chappell acquired what it believed to be the copyright of "Happy Birthday To You" when it acquired the Clayton F. Summy Company in 1935. The company has aggressively defended its ownership of the song's copyright ever since.

A class action suit by a group of filmmakers, artists and musicians filed in 2013 claims that the song has been in the public domain all the while, and has asked that all the royalties collected by Warner/Chappell be returned. The new find in the Louisville library should add some weight to their claim.

It would be nice to have "Happy Birthday" back in the public domain, if for no other reason than to prevent hearing those bad substitutions ever again.

Are Vinyl Records Headed For The Supermarket? 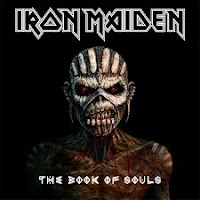 In what may be a fascinating turn of events, it looks like you may see some vinyl records for sales along with the tabloid papers in the checkout line of you local supermarket before long.

The UK's biggest supermarket chain, Tesco, is going to stock vinyl later this week in a special promotion with Iron Maiden and their first studio record in five years, The Book of Souls.

This is a triple album on Warner's Parlophone label, which is interesting in itself in the Maiden were DIY without a label for a number of years.

This is considered to be a trial run that could see the supermarket chain commit to more vinyl titles and inventory if it goes well.

No doubt supermarket chains in the US are watching this one closely.

It’s been reported today that Apple Music executive Ian Rogers has left the company to pursue other interests in an “unrelated industry.” That bodes ill for Apple as Rogers was the operational brains behind both Beats Music and its transition to Apple Music.

Rogers has been a long-time digital music insider, having run Beats Music, Topspin (a direct to consumer marketplace for artists and bands) and Yahoo Music. He’s also one of the smartest and level-headed guys in an industry with a dearth of those attributes.

It’s been long speculated that Rogers was a key ingredient in Apple’s acquisition of Beats. Jimmy Iovine may be a vaunted music exec, but he’s been compared to a New York street hustler by many that have done business with him through the years. Dr. Dre is great producer, but he’s seen as a marketing foil for Iovine. Together they were able to turn some cheap Chinese headphones into gold thanks to a licensing deal with Monster Cable, then flip it for a huge profit to Apple.

Rogers was the guy behind the scenes that quietly created the Beats Music service, which was always going to be limited because of the Beats brand and its tie-in with the headphones. He had his finger on the market and the down-in-the-trenches everyday music consumer much more so than Iovine or Dre ever did, and that’s one of the reasons why Apple bought the company. He was just the kind of guy they needed to run the next iteration of iTunes.

I had the pleasure of hearing Rogers speak many times and even interviewed him for a previous edition of my book Music 4.0: A Survival Guide For Making Music In The Internet Age. I always came away much more enlightened than before, both in local and global views of the music market. Ian knew his customers very well, the tools they were using, and the music they were listening to. Read more on Forbes.
Any purchases made through our Amazon links help support this blog at no cost to you (just click here).
Posted by Bobby Owsinski at 6:00 AM No comments:

Facebook has really been pushing its video service as a real challenge to YouTube, but it's failed in a couple of big areas - monetization and piracy. Now it looks like the service is finally rolling out a system to at least take care of the pirates.

On YouTube, if someone is using your video or music without permission, a technology known as Content ID sniffs it out and notifies the copyright holder. The channel using the video or song without permission is then given 2 choices - either taking the video down or allowing advertising to be placed on the video, of which most of the income will go to the content owner.

This is how money is made on YouTube. Not so much on the video you post, but on the many others that repost it virally.

Unfortunately Facebook hasn't had any method of doing that - until now.

The service is rolling out what it calls a "video matching technology" that will let content owners tell Facebook that a video clip belongs to them.

This is an important first step to monetization, which is crucial if Facebook wants to give YouTube a run for its money.

Facebook says that it now fields more than 4 billion daily video views, but some estimate that as many as 70% are videos that were illegally lifted from YouTube. Now there's a way for the original posters to begin to take advantage of what Facebook has to offer.