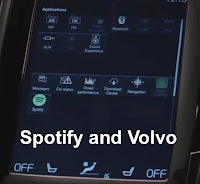 Almost all new cars are blue-tooth enabled so you can stream music from your smartphone, but any driver who's tried this knows how clunky it can be while driving, let alone dangerous.

All you need is a Spotify premium account to get going, and as the video below explains, it's pretty easy to use and doesn't require a smartphone to use. Is this the way of the future for car audio?

Read more about it here.

Maybe Piracy Hasn't Gone Away After All

Just when you thought music piracy was over comes this study from Music Watch which claims that there are more people stealing music than ever.

Most studies contradict this notion (which is what I believe myself), but the following infographic takes an interesting look at the situation. It's short on data, but this article does give a lot more detail.

Note that it was also published a year ago, and the streaming world has certainly gone up a notch since then. 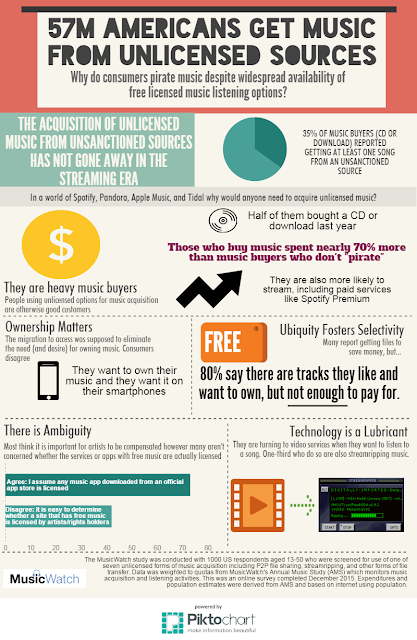 Rock Still Isn't Dead According To A New Study

We keep on hearing that rock is dead as a music genre, but that's not the case at all, according to a study by Nielsen Music. Surprising, rock came out on top when it comes to genres of music that people consumed in the US during 2015.

If you listen to the radio, pop music dominates, but it's only #3 when it comes to favorite music. Also surprising was the fact that country and dance/EDM scored lower than other genres.

Here's what the study found.

It just goes to show that in these days of music consumption online, it's more difficult than ever to determine what's really hot and what's really not.
Any purchases made through our Amazon links help support this blog at no cost to you (just click here).
Posted by Bobby Owsinski at 6:00 AM 1 comment:

Will Music "Windowing" Become The Norm?

When Adele released her latest album 25, it wasn't officially available on most streaming services, which certainly helped her attain some healthy sales. Now nearing 20 million sales worldwide, many label execs have taken notice and want to institute the same policy with other artists as well.

Known as "windowing," the strategy has been used in the movie industry for some time. That's where a film is released on in the theaters for a period of time, and only allowed to go to rental and television only after it's finished its theater run.

The music version of windowing would have a superstar album release be only available via CD or download for a period of time before being released to the streaming services.

While that sounds all well and good on the surface, it also sounds like an industry pulling at straws in hopes of peeling back the flow of time. It won't work for a few reasons:

1. Consumers have now adapted to streaming and they're not going back. They expect to be able to find the music they want on their platform of choice right now and if your latest release isn't there they'll just move on.

2. Adele is a special case, with sales propped up mostly by soccer moms and baby boomer women (Sony did a study) who are predisposed to buy a CD or download.

Windowing is a bad idea, and while I don't think it will ultimately get any traction, it's only pushing back the inevitable. Streaming is here to stay until the next new technology is upon us, so let's all get used to it and maybe even enjoy it.


Any purchases made through our Amazon links help support this blog at no cost to you (just click here).
Posted by Bobby Owsinski at 6:00 AM 4 comments:

MySpace Purchased by Time, Sort Of

MySpace is back in the news again, this time because it's just a small piece of a bigger deal where its parent company has been purchased by big media player Time Inc.

The company was just one of the companies owned by Viant, which is a big player in online ads. Viant also owns the Specific Media ad network and what it calls an "advertising cloud" that's said to connect to more than 1 billion registered users.

There's no word yet on what Time intends to do with MySpace, but despite its long fall from social grace, it still racks up 10's of millions of viewers each month.

If you recall, MySpace was bought by at its peak as a music site for $580 million by Rupert Murdoch's News Corp back in 2005, after which it shed users by the millions. Viant and Justin Timberlake (among other investors) purchased the company in 2011 for a mere $35 million, and tried to revitalize the site, but it never gained traction again.

The platform also proved to be a cautionary tale regarding trusting your user data to a social site, when users woke up one morning in June of 2013 to find their followers reset to 0 after the MySpace relaunch.