Guess The Music Celeb Dropping His Album Via Lyft

Music celebrities will use just about any social edge they can get these days, and it doesn't matter what the platform is.

In May I posted about Britney Spears using Uber to launch her "Pretty Girls" single, complete with a vehicle wrapped in custom Britney graphics.

Not to be outdone, Justin Bieber is making his new album available for early purchase via the Lyft app. Fans can purchase it for $5 from November 12th to 19th. If you buy it via the app, you get the download link at the end of the ride and a $5 credit towards your next Lyft ride (which makes the album essentially free).

And that's not all, the Biebs is also surprising random people by showing up as a passenger in the front seat of some of their rides.

Okay, so this might seem a bit over the top, but it just goes to show how hard even the top 0.1% of music celebs work at keeping in the social forefront and staying in the public eye.

If A-list acts like Justin Bieber and Britney Spears are using all the tools at their disposal, it shows the need to keep up with the latest in social media to make sure that you continue to reach your audience.

If you want to know what a typical teenager thinks of the various social networks available, there's a great post by 19 year old University of Texas student Andrew Watts on BackChannel. In it he describes how he and his friends use all the popular networks, but what they love and hate about them as well.

It's especially interesting what he has to say about the current darling of the teen world, Instagram. In an excerpt from his article, here's why he says it's so beloved.

There's a lot of great additional insight about social use by teens, so if you market to that age group, I suggest you take a look.
Any purchases made through our Amazon links help support this blog at no cost to you (just click here).
Posted by Bobby Owsinski at 6:00 AM No comments:

It looks like indie labels are actually benefiting from digital music and streaming, according to a new survey by the indie music trade organization Merlin. The study contacted indie labels from 26 countries to gauge their health in the new digital economy.

The survey revealed that business was up for 65% of its members, and over half derived more than 50% of their revenue from digital. Only 16% said their digital revenue decreased, mainly because of a decrease in download sales.

What was significant was that around 55% of the labels said that their digital revenue was more than half of their total income, while another 33% placed it at somewhere between 25 and 50%.

Merlin labels represent around 10% of the global digital market share at the moment, but that seems to be rising. What it shows is that indie labels are beginning to thrive in our Music 4.0 economy as they learn the various ways to earn money.

While the major labels have gotten stronger in the last few years, that doesn't necessarily mean that the indies have become weaker. The music industry continues to evolve and everyone inside is learning to change with it in order to stay in business.

Many thanks to Amir Muminovic for naming the Music 3.0 Blog at #4 on the Stereostack Top 50 Awesome Blogs To Follow to learn more about the music business.

Click here to check out the other 49 (my Big Picture Production Blog comes in at #8).

Posted by Bobby Owsinski at 11:00 AM No comments: 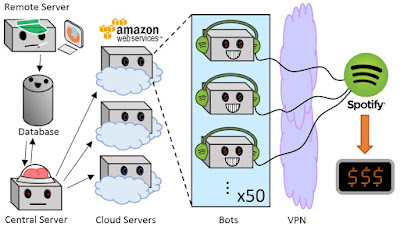 While most people play by the rules, there's always someone that wants to game the system. It happened on MySpace, YouTube, Facebook, Twitter and just about every other platform, so when a story came out about a programmer who gamed the streaming services, it should be no surprise.

Security consultant Peter Fillmore showed how an automated program called a bot (a software based robot) could generate royalties a few years ago. Fillmore made about $1,000 in royalties and even topped the Australian streaming charts of Rdio by having the bot listen to his own music nonstop. In Fillmore's case, it wasn't about making money as much as it was about showing the various streaming services the potential vulnerability.

Fillmore's music was sampled every 30 seconds for about 6 months, when Spotify finally caught on and took down his album.

In a great article on Motherboard, William Bedell attempted to duplicate Fillmore's method and wound up making approximately $32 a day from Spotify, at about $0.08 per stream, which is at the high end of the Spotify payout.

That being said, while this might be child's play for an experienced hacker, it's beyond the abilities of most musicians who aren't programmers. It involves disguised user bots using virtual private networks and dozens of paid Spotify accounts (see the graphic above). Still, Bedell estimates about a 600% rate of return on the venture.

You can be sure that Spotify and all the other streaming services are taking these approaches very seriously, so by the time you try something like this, it's possible that this hole in their services will be patched.

It does go to show that people will always try to game the system if they can.

Music Stories is a new post format that allows people to listen to a 30 second preview of a shared song. The preview is streamed from either Apple Music or Spotify, and can be either purchased from or saved to the streaming service.

The previews are available directly from Facebook, but if you want to hear more you can click through to the streaming service.

To use the feature, just copy the link to the song or album, then post it to your status update box. This creates a preview that others can interact with. An animated spinning record with a pause button shows as the track is played.

This is a great way for artists and bands to get their music in front of their Facebook fans, and is a tool that can be especially valuable on an artist's profile page.