Is This iPad App The 21st Century Album? 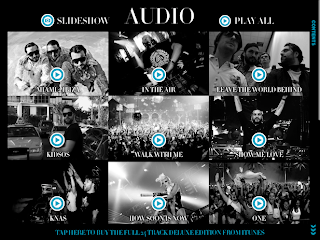 There have been a lot of attempts to build a new digital album format that properly represents what people might want today, with very little excitement or penetration so far. Now EMI (of all companies) seems to be on the right track with a new iPad app version of Swedish house producer super group Swedish House Mafia’s ‘Until One

’.  The product is actually an app version of the trio’s book and album combined with additional features layered on top (see screen shots below). The features include:
* 9 tracks from the album
* All of the photos from the book
* Live and behind the scenes footage
* Interviews
* Social feeds
* Dynamically updated news content
The app/album costs $9.99 and is available at the iTunes App Store.
This is very cool because it's thinking outside the box, but it's really not that far out. It's more of a natural extension of what the album can be. I see it as the wave of the future.
Here's a look at what the app can do.

It may be that the excellent growth in social media that we've all been experiencing may be at an end. According to a new eMarketer study, 63.7% of US web users already use social media and they only expect that number to climb to 67% by the end of 2013.

More than 90% of 18 to 24 year old users already use social media regularly, as does 80% of 12 to to 34 year old online users, which means that you can't rely on simple organic growth anymore - you got to work for it the old fashioned way. It you don't cement those relationships now, you may not get a second chance.

Here are a couple of charts that tell the story.

Posted by Bobby Owsinski at 9:36 PM No comments:

The New Word For Spam - Bacon

It's also turning into a huge business and much more profitable than Spam. As the infographic below shows, once a marketer has you on their list, it's unlikely that you'll try to, or be able to get off. Everything you need to know about Bacon can be found below.

The Court Decision That May Change The Music Business

There's just been a decision by the United States Supreme Court that may have major financial implications on the major record labels that could very well push some of them over the edge into insolvency. I've been reporting on the legal battle between Universal Music Group (UMG) and Eminem's FBT Productions for a couple of years, and it now looks like the case has finally been decided in Eminem's favor. Here's the gist of the decision and why it's important.

FBT brought the suit against UMG stating that a download sale shouldn't be treated like it is in a normal record agreement, but as part of a license deal. The difference is that in a record deal, the record label manufacturers the product (CDs) and pays the artist a royalty of anywhere between 12 and 20% of the wholesale price. In a licensing deal, the record label provides the licensee (such as a distributor in another country producing CDs) with a master, and they in turn manufacture the product. The record label and the artist split the proceeds from the license deal 50/50.

FBT contended that since UMG was only providing a master to an online distributor like iTunes or Amazon, and the distributor was manufacturing the product (in this case making a copy of a digital music file), all online sales are in fact license deals and should be paid as such - at a 50% rate instead of 12% in FBT's case.

You can see the financial implications here. If FBT won, not only would UMG owe them a ton of money, but every other artist at every other label would then sue for more money using the case as a precedent. The entire major label economy would be rocked!

UMG won the first round of the case, but FBT appealed and had the ruling overturned. Then UMG essentially appealed the appeal and took the case to the US Supreme Court for a ruling. The Supreme's refused to hear the case though, and sent it back to the 9th Circuit Court of Appeals to determine the damages.

There's some speculation that this is at least a $50 million decision for Eminem and FBT, and every other major artist will now go back to their record labels with their palms open wide. Lady Gaga and newer artist's will not have this ability however, as labels have since tightened up their contract language regarding downloads, but anyone with an older agreement can probably expect some dough.

The reactions from the industry over the next week or so should be very interesting.

While most music industry pundits have been predicting that music streaming would soon hit critical mass, it certainly isn't here yet even though it continues to grow. Those same pundits also declare that if Apple would change iTunes to a streaming instead of a download model tomorrow, the rest of the world would follow, which is no doubt true.

The Apple streaming anticipation has grown to a fever pitch, especially after last year's acquisition of Lala, but don't expect that to happen any time soon. Here's why.

1) Downloads are still a big business.

But aren't there rumors abounding about Apple in new license talks with the major labels? Yes, they're having those discussions, but not for the reason you think.

Indeed, Apple will soon be announcing a new cloud service (storage via the Internet instead of on board your device), perhaps as soon as the beginning of April, but the idea is that it offers a sort of "insurance" for the end user in case her songs are wiped out on her computer, iPhone or iPod. If all your songs live in Apple's cloud, you can access them from any device instead of storing them locally (although you can do that too, or both). Hard drive died? No problem, the songs are stored in the cloud.

The problem is that the record labels wanted to get paid for a second download for the cloud privilege, so Apple had to enter into new licensing discussions as a result. Who wants to buy the same music twice?

Want another good reason why you'll see an Apple cloud service soon? We'll all soon be living in a tablet world, where iPads replace laptops so you won't have as much on-board storage. But you won't need that storage either, if everything lives in the cloud. Expect Apple to call it something other than "the cloud" though. Right now, the bets are on "personal locker."