Have Apple And Spotify Already Lost The Chinese Music Market?

Most Western music streaming companies look at China as sort of a golden goose. It’s not laying any eggs at the moment, but you think that one might come at any time. That goose may be stolen even before it makes its first deposit though, as the Chinese mega-company Alibaba recently announced that it will combine two of its music properties, Tiantian and Xiami, into a new as-of-yet unnamed music service.

The Chinese music market is potentially huge, with an estimated 471 million people currently listening to music online already. That said, the revenue is relatively minuscule at only $91 million last year compared to $3.5 billion in the U.S, according to the IFPI.

The reason is that Chinese consumers are used to getting their music for free, thanks to over a hundred pirate sites in the territory. Yet in a country of nearly 1.4 billion people, it wouldn’t take a significant portion to really make a difference in the music industry’s bottom line if they indeed did pay for their music.

Western companies know that, of course, and eye China as the final frontier of music distribution. That’s easier said than done though.

For instance, Spotify is available in over 50 countries, but it’s still not officially available on the Chinese mainland (it is in Hong Kong). Some premium tier users who have subscribed to the service elsewhere say that coverage around the country is spotty at best, with speculation that it may be due to government censorship. Even the recently launched Apple Music is available just about everywhere in the world except China at the moment.

Although you can almost hear the corporate wheels turning in board rooms of streaming countries everywhere in the West, China remains a tough market to crack, and with Alibaba entering the picture, it just got tougher. Read more on Forbes.

It's very easy to believe that good social media promotion will get your name out there, and it certainly will, but when it comes to having your music heard there's still nothing like traditional media.

According to a new study by EvenBrite, most people still discover new music through traditional means like radio, television and word of mouth at 68%. Streaming came next at 42%, while social was way down at 14%. Live was even worse at only 8%.

This study corresponds with others in that radio still comes out #1 for music discovery, although YouTube seems to be catching up (at least for the moment).

Streaming does have another huge positive effect though. 51% of people that buy tickets to concerts do so because they discovered the act on a streaming service. 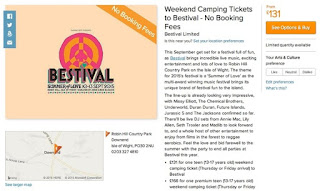 One of the things that everyone hates is the service charge attached to a concert ticket when you buy it from a broker and even directly from the box office.

Amazon may finally put an end to that as it's trying to get into the ticketing business, promising full transparency and no extra charges in tickets purchased from the site. In a pilot program launched on Amazon Local, the company is selling tickets to the Bestival shows on the Isle of Wight in early September.

Amazon will offer more shows in the UK through the end of the year, then after the bugs are worked out, will roll it out to the US as well.

One of the little known secrets in the concert industry is that it's not the venues or promoters inserting this extra charge though - it's the acts themselves. Instead of raising the ticket price to where it seems too high, it feels more acceptable if there's that service charge on the back end.

Many acts actually hate the idea of doing that to their fans, and these are the ones that usually allow paperless ticketing, a practice that has yet to gain tracktion in the industry.

If Amazon ticketing catches on, it might finally put a stop to the insane extra charges that we so reluctantly pay.

Will YouTube’s Music Key Streaming Service Be A Hit Or A Miss?

Now that the Apple Music launch has come and gone the next shoe to drop in the ongoing music streaming wars may be the one swinging the heaviest hammer. That’s Google’s YouTube Music Key, which has been hinting at a launch for months now with very little solid information about its final form forthcoming.

Until last week when YouTube CEO Susan Wojcicki spoke about it at Fortune’s Brainstorm Tech event, the silence around Music Key had been so deafening that you get the feeling that Google (which owns YouTube) was waiting to see what would happen with Apple Music before it committed itself to a launch. If ever there was a strategic pause, we’ve just seen it, as the company could only be sure of the hand that Apple was playing by watching Apple Music’s actual entry into the market.

Now that all of Apple Music’s features are out in the open, YouTube is free to tweak its service to either take a different approach from the rest of the competition or attempt to do some of the same things.

Music Key has been in a limited beta since late last year at an introductory price of $8 per month, but we’ve already been told that the final price will be more in line with the rest of the streaming industry at $9.99. That’s not Google’s choice (nor was it Apple’s) even as the general feeling in the tech industry is that $5 per month is actually the ideal price point.

Five bucks won’t fly with the major labels though, and the streaming services can’t distribute something that they don’t own the rights to, so Google, like Apple, will be forced to toe the line and charge $10 per month when Music Key is finally introduced. The place where it can make a difference in price however is with a “family plan” that extends additional subscriptions to family members. Read more on Forbes.