The Current State Of Social Networks

Here's a very interesting info-graphic from Ignite as sourced from Google Insights that describes the current state of social networks. As you can see, interest in social networking seems to have flattened out somewhat. It's also interesting how many of the most visited networks are not in the US. And finally, I don't think any of the 5 biggest losers are a surprise (especially MySpace), but the winners are (especially the Chinese Weibo).

Check out my Big Picture blog for discussion on music, engineering and production tips and tricks.
Posted by Bobby Owsinski at 9:32 PM No comments:

5 Alternative Product Ideas For Your Fans 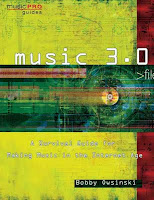 It's time for another excerpt from the Music 3.0 Internet Music Guidebook

, this time regarding 5 alternative product ideas that you can market directly to your fans other than your music or the typical merch that everyone sells. You won't necessarily charge for these items, but they'll garner a lot of interest from your true fans.
------------------
Be extremely careful about how you market to your fan base. Chances are that your fans want everything you have to offer, but they don’t want to be hyped about it. Make an announcement about a new release or a piece of swag, but don’t oversell it. Fans don’t need to know that you think your new music is the greatest thing you ever did or that it’s better than the Foo Fighters last release. They’ll decide for themselves and then sell it for you in their own conversations if they like it.

The way to market to your tribe is by simply presenting your product to them. Just make them aware that it’s available, and they’ll do the rest. You can take it a bit further by offering them information about the product—the more exclusive, the better.

1. Give them a behind the scenes story about the making of the product

2. Tell them where the idea for it came.

3. Tell them about all the people involved, especially other tribe members.

4. Provide interviews with others involved in the project.

5. Give them all the trivia involved in the project, no matter how small. True fans will eat it up. If it’s a new song, tell them where it was recorded, who the engineer and producer are, how many Pro Tools tracks were needed, how long the mix took to finish, how many mixes you did, how the final mix compared with the rough mix, and all of the hundred other fine details that go into producing a song. If you just produced a new T-shirt, describe where the design came from, why you chose the manufacturer, what the shirt is made of, why you chose the color, and so on. Get the idea?

Check out my Big Picture blog for discussion on music, engineering and production tips and tricks.
Posted by Bobby Owsinski at 9:52 PM No comments:

A new white paper about Facebook engagement from a research site called Buddy Media Platform had some very interesting points gathered in a recent survey. The report is called Strategies For Effective Facebook Wallposts: A Statistical Review and can be downloaded for free.

5 Rules for Facebook engagement that came from the study are:

1. Keep your posts short and sweet. Posts of 80 characters or less have 27% higher engagement rates.

3. Post when people are listening. Posts outside of business hours (10AM to 4PM EST) have a 20% higher engagement rate.

4. Some days are better than others. Engagement rates are 18% higher on Thursday and Friday than the other days of the week, but Saturday and especially Sunday are good too. This can vary by industry though.

5. Avoid the noise of Monday. There's too much going on after the weekend.

Check out my Big Picture blog for discussion on music, engineering and production tips and tricks.
Posted by Bobby Owsinski at 9:33 PM 2 comments:

When it comes to social networking, the first network we think of is Facebook closely followed by Twitter. But even though Facebook is still the social giant that dwarfs everything else, there are 28 other social networks world-wide that have at least 1 million daily views, according to Pingdom. Here they are:

As you can see, there are plenty that aren't well-known, mostly because they're popular in a small area of the world, but that doesn't mean they're any less powerful in getting your message across. Ask your fans if there's another network that they visit often, and be prepared to jump in if the answer is yes.
----------------------------------
Help support this blog. Any purchases made through our Amazon links help support this website with no cost to you.

Don't forget to check out my Big Picture blog for discussion on  music, engineering and production tips and tricks.
Posted by Bobby Owsinski at 9:31 PM 1 comment:

Devo and session drummer Josh Freese made lots of headlines (including a few mentions here) a couple years ago with his very amusing multi-tiered music package. If you recall, his album Since 1972 had a variety of very humorous packages available from anywhere from $7 up to $75,000.

Josh has done it again with a new EP called My New Friends, and once again, the packages begin with a simple $5 digital download and become a lot more interesting, and funnier, from there. For instance, at $50 you get a "Thank You" phone call from Josh and a bumper sticker. At $125 you get all three of his CDs plus a set of signed drum sticks, a copy of his fifth grade report card, and a boarding pass from one of his past flights.

He has four different $7,500 packages (one that's already sold), one for $10k, and finally a $75,000 deluxe package where Josh joins your band for a month, you get one of his drum kits, he writes a 5 song EP entirely about you, you and Josh take shrooms and cruise Hollywood in Danny from Tool's Lamborgini, and you and Josh get matching outfits from Tommy Bahama's.

Now it's easier for Josh to reach people than most artists because he's played in some great bands and therefore, has a somewhat high profile, not to mention a great sense of humor, but the example here is how much he thinks out of the box.

Instead of just offering his music in various formats, he makes almost every purchase an event. In doing so, he also makes it newsworthy (we're talking about it right now), which elevates Josh's awareness. Use Josh as an example - think outside the box, offer your fans a variety of packages, and make your music an event. Check out Josh's packages here.