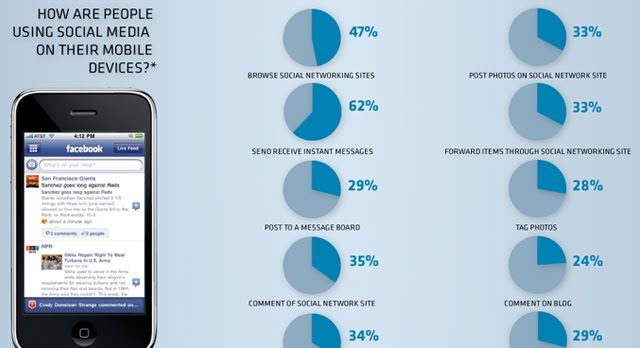 Here's a great infographic from Mashable that was sponsored by Ben & Jerry's (which seems kind of strange).

A couple of statistics that are not in this graphic are:

1) Mobile users are twice as active on Facebook as non-mobile users.

3) Female usage of mobile social networking is higher than male.

I haven't drawn any major conclusions from this info except that it confirms that the phone is for more and more day to day business and pleasure, and it sure looks like that trend will continue.

What Recent Hit Songs Have In Common

The Future Hit DNA website just did a great summary of the characteristics that make up the recent 2010 hits. Jay Frank does an excellent job of looking at the Top 50 biggest selling downloads, which amounts to 75 million download sales and over $100 million in revenue. He's also written a great book on the subject called FutureHit.DNA

I'm not suggesting that you write a song like you'll find outlined below, because that's just going to take a tired genre and make it even more so. But it is interesting to look at what makes up a hit these days. You can read the article for yourself, but allow me to summarize.
Check out this article and website. It focus on songs in a way that you won't find anywhere else.

Prince Says "The Internet Is Over"

By now everyone has heard about the exclusive interview that Prince gave to the UK's Daily Mirror newspaper where he was quoted as saying, "The Internet Is Over," among other things that seemed pretty out-of-touch.

Haven't heard? Ok, some more quotes:
"The Internet is like MTV. Once it was hip and then suddenly it was outdated."

“The Internet’s completely over. I don’t see why I should give my new music to iTunes or anyone else. They won’t pay me an advance for it, and then they get angry when they can’t get it.”

"Anyway, all these computers and digital gadgets are no good. They just fill your head with numbers and that can't be good for you."


Prince has shut down his official website, and he's never been on any social network, so it appears his online presence is nil. But are we being manipulated here?

Could it be that he knows very well what he's saying, and just saying it to get the maximum exposure for his new album, 20TEN? If so, wouldn't it be better that we were discussing how great his music is rather than a controversy?

Prince's new album will again be distributed as a CD inside the Daily Mirror, and he may even have a distribution deal Warner Brothers again, despite the major falling out they had some years ago. When the album comes out, let's see what the comments are then.

I saw this article on Mashable recently and thought it would be good for a repost. Apple has had a great effect on a number of music careers thanks to the artist's songs being included in their television advertising. Let's look at a few.


There's a school of thought that says that exposure on television doesn't necessarily help your career, but these artists have found otherwise. Of course, the musical landscape is far different in 2010 than it was in 2003 or even 2008.

Social Sites And How They've Boomed 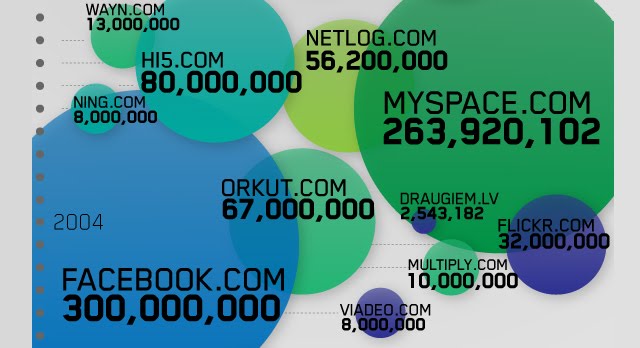 Here's an interesting graphic that shows how social media networks continue to thrive and grow. The lower the circle, the older the network.

Orkut.com is owned and operated by Google and is big in India and Brazil.

Wayn.com is a network for travelers and is an acronym for Where Are You Now.

HI5.com is the third largest social networking site in terms of unique visitors, but bigger in Latin America than in the US.

Netlog.com is a Belgium network aimed primarily at European youth.

Viadeo.com is a French network that's a competitor to Linkedin.

Draugiem.lv is a Latvian social network.

Multiply.com is a network with an emphasis on shared media and aims to be a one-stop shop for their users Web 2.0 experience. They have some major financial backing.