Like A Coiled Snake Spotify Strikes Back At Apple Music 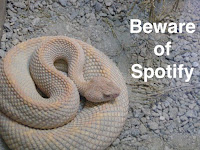 If you thought it was a coincidence that Spotify released new and much improved subscriber numbers directly after the big Apple Music announcement at its World Wide Developer Conference, then you haven’t been paying attention to what many are calling the “Streaming Wars.”

At least in the short term, Spotify is still the market leader in the interactive music streaming space, and the company did its best to put an exclamation point on that fact by providing a lot of new information, strategically waiting a day for the Apple Music furor to die down a bit to steal a little thunder for itself.

At the end of last year, the company touted 60 million total subscribers, with 15 million of them paying the going rate of $9.99. That number far outpaced its closest rival in Deezer, with only 6 million paid subscriptions, and others like Rdio and Tidal that fall below the 1 million mark.

But Spotify’s new user numbers show a striking increase in a short time, with the company announcing it now has 75 million users, of which 20 million are now paid subscribers. This makes the company a major player even when compared to the non-interactive streaming side of things, as Pandora only sports 79 million total users, with the vast majority of those using the free tier.

While user numbers are solid proof of growth, another part of the same announcement may be even more important. The company also reported another round of funding for $526 million, which places its valuation at around $8.53 billion (keep in mind that it has yet to turn a profit).

Among the partners that invested in this round include Swedish telecommunications firm TeliaSonara AB and Abu Dhabi’s sovereign wealth-fund, so there are some deep pockets with a large stake in the company’s success. Read more on Forbes.
Any purchases made through our Amazon links help support this blog at no cost to you (just click here).
Posted by Bobby Owsinski at 6:00 AM No comments:

While Apple was introducing its new Music service on Monday at the WWDC, it made a point of saying that indie artists would be prime contributors to the service. That's when Loren Kramer was introduced and given about 10 seconds of prime airtime that any indie artist would die for.

The problem is that Kramer seems to as close to a true indie artist as a Blackberry is to an iPhone.

With the world filled with hard working artists slugging it out gig after gig, recording after recording, Apple instead chose an artist who hasn't played many gigs and has no presence on iTunes, Spotify, Facebook, or even a web page. He has a Twitter feed but that only went live right after the announcement.

What Kramer does have going for him is a manager who used to work directly for Apple Music head Jimmy Iovine back in his Universal Music days, and a whole list of privileged friends thanks to a wealthy family that sent him to exclusive Hollywood schools. Kramer is in fact a visual artist who's the editor of an art magazine called Megazine, hardly what you'd call indie music credentials.

Apple really whiffed badly on this one, and while it might not rise to the U2 fiasco of last year, it still proves that the company is now surprisingly tone-deaf to what's currently going on in music.

This could also bode poorly for the thousands of indie artists that were hoping that Apple Music might somehow become a new source of income. If the company couldn't get something as simple as this right given the thousands of worthy candidates available, then it really shows where the company's priorities lie.

So good for you if you're on a major label, Apple Music will welcome you with open arms. If you're an indie, not so much.

You can read some excellent posts about this in Digital Music News and The Next Web.

Just about every streaming or download music service these days has at least 20 million songs available to choose from, and some have even more. This is great for the consumer in that the choices are enormous, but there's also a negative component it brings as well.

Mark Mulligan's Music Industry Blog post shows that because of all these choices, people are actually listening to their favorite music less than ever before.

When people purchased music in the past, be it either vinyl, CD or download, they tended to listen to it over and over first because they paid for it, but also because it was the only new music they could get on demand. With new music now available at your fingertips, this is no longer the case thanks to the short attention span of just about everyone today.

What this seems to mean is that fans now have a shorter-term relationship with the artists they like than every before. If you listen to a song or an artist over and over, you tend to identify more. That's no longer the case, so it means that there are fewer deep fan-artist relationships now being built.

This has long term implications in that 5 or 10 years down the road there won't be as many artists capable of filling an arena or drawing a festival crowd - obviously not good for the business.

Mulligan also makes the point that because there is so much mediocre music now available, it's becoming more and more difficult for quality music to rise above the clutter.

The only saving grace is that music follows technology. While streaming may be the distribution method of choice right now, something new could completely rewrite the music business as we know it and make us throw the above out the window.  Tomorrow's music and music industry will likely be quite different than what we see today.

There have been plenty of naysayers willing to condemn Apple’s new Apple Music service before it was even launched, but they might just have to take back their words if today’s presentation outlining the service was any indication.

It’s certainly true that Apple has fallen behind its competition when it comes to music streaming, and that Apple Radio wasn’t the resounding success that everyone anticipated. It’s also true that Beats Music, which the company paid a bundle for last year, wasn’t exactly setting the world on fire and quite possibly wouldn’t even be around today had Apple not thrown it a life preserver.

Then there’s the fact that while Apple touts 850 million credit cards on file for iTunes, more of them apply to the app side of the store than music, making the number slightly dubious when anticipating subscriber numbers.

All of that could lead you to believe that Apple Music could easily come and go after the initial wave of enthusiasm from today’s announcement died down.

If you watched today’s presentation however, it was readily apparent that there were a number of features shown that differentiate Apple Music from the competition, any one of which could make a big enough difference to help it dominate the industry in no time.


First and most important is its ease of use. Apple Music appears to be very easy to navigate, with My Music, For You and New tabs designed to help you negotiate the music that you’ve already purchased, find recommendations based on your previous playlists or listening trends, and discover recently released music. A mini-player complete with artwork also provides easy to access control of the music being played as well, and a playlist function makes it easy to add your own graphics, reorder songs in the list, and search the library to find additional music. Read more on Forbes.

Electronic Dance Music has been one of the biggest trends in music in recent years, but it looks to be slowing down.

According to the latest IMS Business Report 2015, EDM grew about 12% last year, which on the surface is great, but down considerably from the the 37% growth of the previous year.

The total market for EDM is now estimated at a very substantial $6.9 billion. North America represents about 29% of that market at around $2 billion.

Still, many data points indicate the genre is beginning to flatten out. First of all, U.S. track sales of EDM stood at 4.6%, the same as in 2013. The same with music festivals, although they're still huge with over 1.4 million attending.

One area that's still is growing is DJ equipment, especially in the United States. The U.S. accounts for 40% of the DJ equipment market, which grew 16% last year. As a comparison, stringed instruments and amplifier sales fell 2 and 3% last year.

Of course, the major DJs are still hot and making more money than ever, with the top 10 earning about $305 million last year. Calvin Harris tops the list at $66 million, or about $1 in every hundred brought into the industry.