How To Submit Your Songs Directly To Pandora

If you're an indie artist, you want your songs on as many music streaming platforms as possible. An easy way to do that is to use a distribution service like CD Baby, Tunecore or Distrokid, but it will cost you some money as a result.

Here's a video of how you can submit your songs directly to Pandora without a distributor in the middle. It's from my Selling Music: MP3s, Streams And CDs course on Lynda.com.

Can Pandora Grow Any Larger?

Then comes the Early Follower stage were the technology or product is proven and stable and attracts enough users to be an ongoing business, and with just a little help, hits critical mass to go to the next level.

As you can see from the chart below by Media Consulting's Mark Mulligan, Pandora has reached the final stage of market saturation, and had even dropped a bit when iTunes Radio was launched.

That proved to be just a blip, but the fact of the matter is that Pandora has reached a level where it may not have that much growth left, especially not at its previous rate. As more people discover the joys of interactive streaming (Spotify, Beats Music) as opposed to a radio-like service, Pandora may find itself stalled at around the 70 million users that it now has. 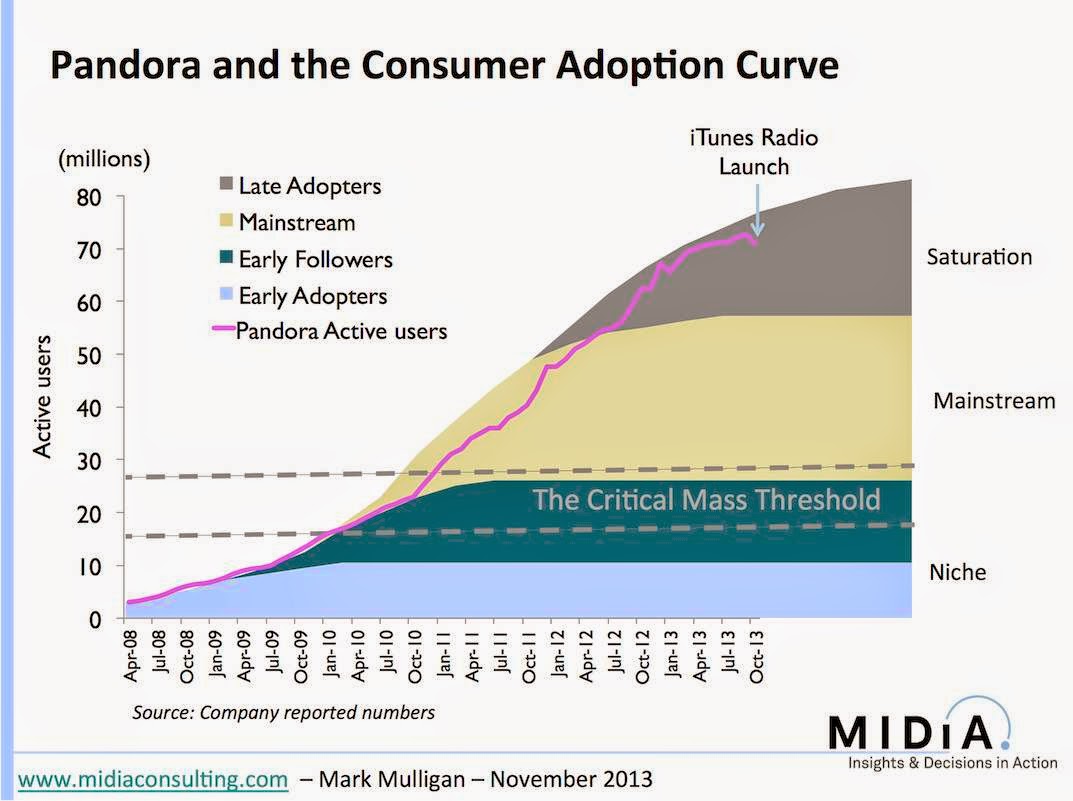 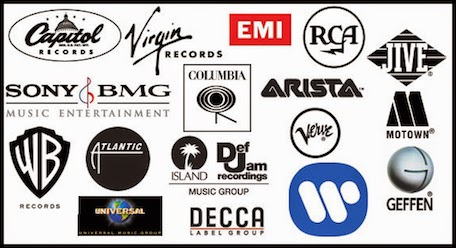 This blog is mostly about getting along in the new music world without a record label, but there does come a time when having a label is worth considering if you want to jump to the next level as an artist. Record labels are not intrinsically bad; it’s just that you have to weigh the advantages versus the disadvantages to determine whether or not the time is right for you to be associated with one.

This excerpt from my Music 4.0: A Survival Guide For Making Music In The Internet Age book covers the 8 scenarios where a partnership with a label could be a great career move.

1. It's offering you a staggering amount of money. If this happens, either you must be hot enough for a bidding war to have broken out or they really, really believe in your future. Just remember that this might be the last money you’ll ever see from the label, and it may have a significantly negative impact on any credibility that you have with your fan base. Best to test the notion of signing with a label with your tribe just to see their reaction first, since they won’t buy anything from you if they feel you sold them out.

2. You need money for recording, touring, or any other needs. One of the things that labels do really well is to act like a bank by using your music as collateral. Major labels still do this as skillfully as ever before, but is it worth the price you’re going to pay in terms of the freedom that Music 4.0 offers?

3. You’re spending too much time on certain aspects of a career. A label can take some of the burden of marketing and distribution off your shoulders. You still have to be involved on some level, though, or you run the risk of things getting way off course before it’s brought to your attention. If you don’t have a manager already, that might be a better association to make at this point than to start working with a label.

4. You need expanded distribution. If distribution into the remaining brick-and-mortar stores is beyond what a small indie label can provide, a major label can be your friend. Major labels have the relationships, the sales force, and the means to collect the money. If you’re distributing by yourself, you’ll get paid if and when the stores feel like it because you have no clout. In some cases, you won’t even be able to get into the remaining chains and retail stores because you don’t sell enough to get on their radar. A major label or large indie sells the stores a lot of product, and they’re trusted, so it’s a lot easier for them to get the retailer to take a chance. Further, the label has some leverage in that they can always threaten to withhold in-demand product if they don’t get paid.

5. You want to expand into foreign territories. Let’s say that you have a huge following in Germany via your online efforts, but you can’t service them properly because you live in Kansas City. A major label can use their overseas resources to promote you and get product in the stores there. It saves you the hassle of reinventing the distribution and marketing wheels.

6. You need economies of scale. Sometimes the power of a big label can be used to your advantage since they can cut a better deal with a service (YouTube and MTV come to mind) than you ever could as an indie.

7. You need major marketing. Another thing that a major label does well is to market you traditionally. If you want airplay on radio and appearances on television, a label may be your only hope. If you want reviews and articles in mainstream media, they still have the clout to get it done.

8. If you feel that you’ve gone as far as you can go as an indie artist. If you need help to push your career over the edge to stardom, then a major label or major label imprint may be the way to go. This is what they do—sometimes well, sometimes not.

Who Will Be The Last Streaming Service Standing?

Reports last week that Google is in talks to acquire Songza, a six year old music curation and streaming service, show that an industry-wide rollup in streaming services is now in real possibility. This is on the heels of Apple snapping up Beats Music recently, and may be a sign of things to come in the sector.

Although Songza is a relatively minor player in the space with only 5.5 million active users, it does show that the major players are interested in acquiring infrastructure or feature parts they don’t currently have in order to quickly compete with the other major players. Songza is known for its music curation, which could be immediately integrated into Google Play Music All Access (perhaps the world’s worst brand name) in order to compete with an anticipated new Apple streaming service. Beats Music’s main feature is also curation, and having Apple jump out in front with that feature would require Google Play to catch up even more than it has to already.

It’s still unclear whether curation is the killer feature that music consumers want though. A trusted source has always been the key to popularizing new music, from radio DJs to MTV to music critics, but as of yet no single curation source has risen above the rest online as the de facto standard. In fact, it can be speculated that curation doesn’t actually matter much at all, given the fact that Beats Music subscriber numbers are so low at between 110,000 to 250,000, depending on what you read. It was the feature that the service hung its hat on, yet it wasn’t something that consumers flocked to when it became available.

That said, there are indications that we’re beginning to see what has been predicted as a slow rollup of smaller streaming players that will eventually leave only the major players of Amazon, Google and Apple, and maybe one or two of the smaller ones, standing. Read more on Forbes.
----------------------------------
Help support this blog. Any purchases made through our Amazon links help support this website with no cost to you.

AdAge has reported that Yahoo is about to launch a new video service geared to compete with YouTube. The company has apparently been approaching many popular YouTube creators with promises of larger revenue splits in an effort launch with some significant names and content.

The company has wanted to enter into the video business for some time. Last year it launched an unsuccessful campaign to acquire DailyMotion, and CEO Marrissa Mayer has stated several times that she felt the company needed to increase its video presence in order to succeed.

Like on YouTube, content creators can reportedly start their own channel, and will have access to a dashboard that enables them to publish across all Yahoo assets like the home page and Tumblr. The company isn't requiring an exclusive deal though, as anyone with a Yahoo channel can also post on YouTube or any other video platform as well.

There is a big stumbling block, however, in that Yahoo's current agreement with content creators states that the company be given a perpetual license to any videos that are shared on Tumblr, which effectively transfers the video's ownership rights to Yahoo. One would assume that this language will be stricken from the final agreement before the service is launched, since most veteran content creators would simply ignore the service if it remained as is.

While it's nice to have another service in the online video mix, don't expect too much from Yahoo Video. The company has a long history of screwing up good ideas, so the odds are good it will happen again.