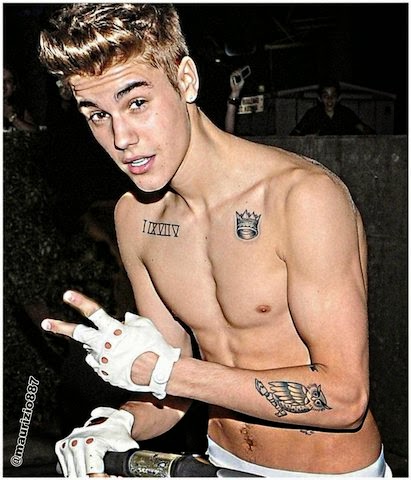 By now most adults are sick of hearing about the shenanigans of teen star Justin Bieber, who’s managed to stay in the news lately for all the wrong reasons. From wild visits to strip clubs to recklessly driving his Ferrari to egging his neighbors house to police raids on his mansion, the Biebs has been front and center on the gossip pages of tabloids and blog sites everywhere.

While Bieber might consider his behavior as a simple ascension into manhood (most adult males have had their share of teenage “events” that they would rather forget), it seems that he’s failed to consider what it’s doing to his career along the way. Yes, he’s doing a great job of crushing it into tiny pieces, as the putrid box office take of around $6 million of his recent film Believe shows. Considering that his last film Never Say Never grossed about $73 million in the US alone just two years ago, and he’s released a series of recent songs that never even charted, it looks like his career has hit the skids seemingly overnight.

Maybe he thinks that morphing into a bad boy will keep his maturing audience interested. Maybe he’s rebelling against the wishes of his family and management (and what kid doesn’t rail against authority). Maybe he’s just totally unaware that his actions have consequences. None of that matters. What he’s managed to do is take an enormous following and make them indifferent at best and disgusted at worst. Before too long, he’ll be a has-been trying to make a buck playing the oldies club circuit.

And that’s the cautionary tale here. Fans are hard to come by. They, of course, have to love your music first and foremost, but they also have to identify with you in some way, which is one of the basic pillars of branding. You or your actions (or both) also have to be likeable, which few of his once legion of fans find these days. Once you’ve broken your brand, it’s a huge uphill battle to build it back up, as Bieber will soon find out. Read more on Forbes.
----------------------------------
Help support this blog. Any purchases made through our Amazon links help support this website with no cost to you. 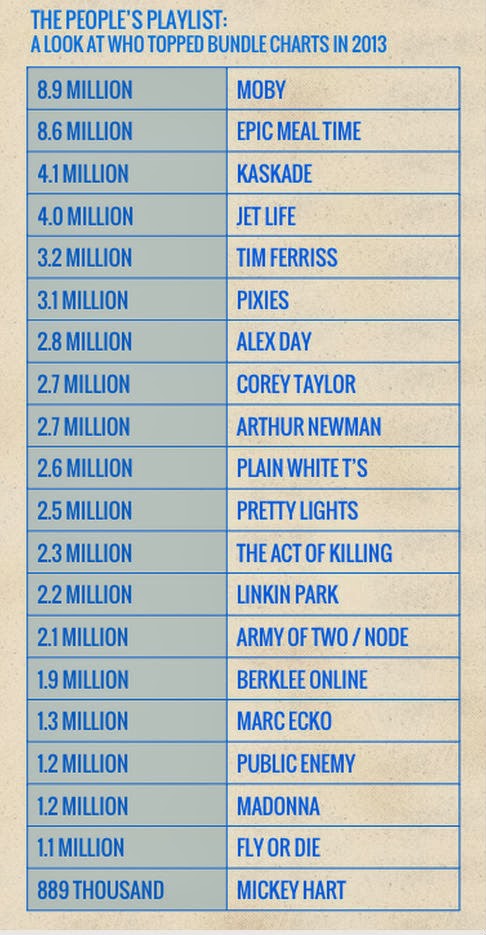 Usually when you think about BitTorrent you think of piracy, but the service has been working hard over the last year to go legit with its Bundles offering. A bundle is a collection of free content files like an album, with a gateway to paid premium content as well.

Bundles are beginning to gain traction, with over 60 million downloads in 2013 and an impressive number of big name artists signing on. As you can see from the chart on the left, Moby topped the chart with almost 9 million shares, but other major artists like Kaskade, Linkin Park, Public Enemy and Madonna were also included.

The secret behind Bundle's success is that they're included with every uTorrent or BitTorrent application, so the numbers can add up quickly.

Bundles are still flying under the radar, so you might not hear much about them at the moment, but with numbers like the chart provides, it won't be long until this becomes a staple release format of artists everywhere.

Beats Music is being launched today to much fanfare and rightfully so. Using “music curation” as its main calling card, it’s a different take on a theme used by other competitive services. Whether the public views that as a good enough reason to shell out their $9.95 a month, we’ll soon see.

In the meantime, Spotify is attempting to steal Beats Music thunder at every turn, announcing that it will now provide unlimited free mobile streaming (with ads) on the same day that Beats Music announced its launch last week. Now comes the official day of the launch and Spotify is at it again, this time announcing that it’s considering a new feature that programs upcoming music to your heartbeat. It doesn’t matter if it actually introduces this feature or not, it’s a juicy enough story to be front and center in the news, and that’s what the company really wants.

Welcome to the streaming wars, where the potential pie is so large that each seemingly small move by the companies involved can have extreme strategic importance. You think retailers beat each other up? You ain’t seen nothing yet (to borrow a phrase from Messrs. Bachman and Turner). Prepare for the major back and forth bashing to come.

Streaming music is actually divided into two categories; the radio-like non-interactive, and those that are on-demand. Pandora and iTunes Radio fall into the first category, where the user is unable to access specific songs, only playlists that are fine-tuned by a proprietary algorithm to match the tastes of the listener. On-demand services include Spotify and Beats Music, where a song or album can be called up as the feeling hits you.

Most of the on-demand services actually blur the lines between non-interactive and true on-demand, as they also make suggestions or provide playlists, and even provide access to online radio stations as well. Beats Music takes the playlist idea a step further by having them provided by well-known music celebs, niche leaders, or vaunted “people in the know,” although iTunes Radio does something similar with its themed and  featured “stations.” Read more on Forbes.
----------------------------------
Help support this blog. Any purchases made through our Amazon links help support this website with no cost to you.

Many artists, bands and musicians have heard of Nielsen SoundsScan, but they're not sure how it impacts their musical lives. The fact of the matter is that if you want to be included in Billboard's charts, then you need to know about SoundScan because its at the basis of how their charts, and many others, work.

In the early days of the record business, the charts were mostly derived from a phone survey of record stores and radio stations to determine what people where buying or listening to. Obviously, this survey could be easily gamed and regularly was by a variety of methods. This changed with the introduction of SoundScan in 1991, when the company began to track sales through the inventory barcodes that each record, cassette and CD had printed on it for inventory control. As a result, a more or less accurate count of actual sales could be counted.

I say more or less because the system wasn't perfect. The data was originally collected from about 14,000 retailers, but many smaller stores chose not to be included in the survey because it required a Point-of-Sale inventory system and electronic access to SoundScan, which could be expensive at the time (it's less so today, but still too much for many of the 2,500 retailers left).

In an effort to somehow include the sales of the non-reporting stores, SoundScan introduced a weighting system where a single sale at a large chain store in a major area like Chicago could be counted as multiple sales. A sale a certain stores could be counted for as many as 10 or as few as 2, while a small mom & pop retailer's sale would be counted only as 1.

SoundScan was always careful about revealing which stores where weighted, but many record labels made intelligent guesses about which were large weighted stores and found ways to inflate their sales and therefore, the chart position of an album, which kind of defeats the purpose of SoundScan in the first place.

That said, SoundScan is still in use today, which is why it's essential that any physical product that you release has a barcode on it. You can purchase one from Tunecore or CD Baby, if you're using them to release your product, or use any of the online barcode generators like this one.

The Billboard charts use the input from SoundScan less these days, as they now also value digital sales and social media as well as radio airplay when determining airplay. That said, if you want a chance at the charts, make sure you include that barcode so SoundScan knows you exist.

The New World Of Label Services 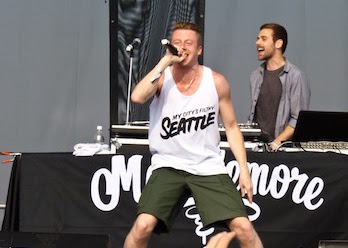 It all started with Macklemore and Ryan Lewis. Instead of signing a typical record deal with a major label, they opted instead to pay Warner Bros promo department to work "Thrift Shop" to radio, taking advantage of one of the attractive strengths that major labels still have to an indie artist. Thanks to Warner's muscle in this area, the song went on to be a world-wide hit, turning the team from modest success story to superstars.

Previously, in order to receive all the marketing and distribution clout of a label you had to sign a recording agreement with them that entitled you a split of the net revenue of between 12 and 15%. Today with an artist able to do so much of the work himself, it's no longer necessary or desirable to sign such a deal. There still are some services that only a major label does well (like CD distribution and radio promotion) that are desirable, and now all the majors have developed their own "label services" divisions to make those services available to indie artists.

For instance, Sony Music provides label services through its Red Associated Labels, Warner Music Group through its ADA unit and Universal Music has it's Caroline division (which handles Peter Gabriel and Korn). Plus BMG transitioned totally to label services when it sold its record label to Sony in 2008 and now handles Back Street Boys, Bryan Ferry and Anastacia, among others. Plus there's Kobalt (Pet Shop Boys and Prince) and in the UK, Cooking Vinyl (Madness and Amanda Palmer), as large indies getting into the arena.

While a brand new artist might not be able to afford these services, any artist with a small measure of success probably can, and should. Label services are a fast rising revenue generator for the industry, and truly a symbol of the new music business. It's a win-win situation for the artist and the label. The artist stays independent and gains the clout of the label, and the label gets added revenue without having to bankroll a new artist.

If you ever wanted to see the face of Music 3.0, this is it.