As I stated in a post last week regarding what's new with YouTube, the service continues to roll out new features, sometimes without promoting them. One of the those unpromoted new features is a new way to brand your channel and videos. To access this feature:

2. Under Channel Settings on the left menu, click on "InVideo Programming." 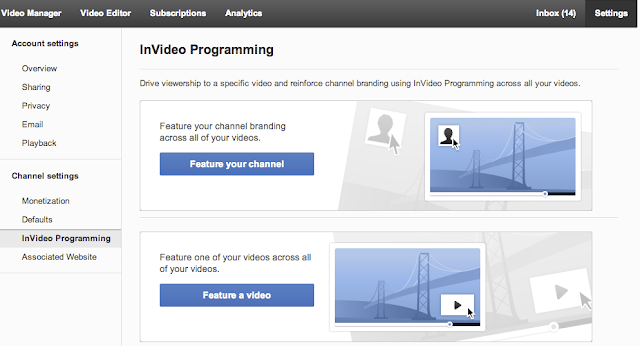 Pretty cool, right? Slowly but surely YouTube is listening to all the complaints and suggestions and implementing them as new features. They're not always publicized, so it pays to poke around in the various menus once in a while to see what's been updated.

Use A Quote, Pay A Fee

A discussion on copyrights or patents is a good way to raise the excitement level in a room full of entertainment or tech executives these days. There are those that feel strongly that copyrights and patents are the stick that stirs the innovation coffee, the key to a start-up getting funded and later making money. On the other hand, you have those that just as strongly feel that copyrights and patents are an old fashioned, out-of-touch method of idea protection that actually stifle innovation instead of encouraging it (the recent rash of patent troll lawsuits plays into this somewhat). The market takes care of their own and the first mover always has the advantage, they claim.

Each has a good argument, and each can point to excesses that drag down the other's position. Well here's a situation that acutely shows how copyright can be taken to the extreme.

A news article in Private Eye states that the UK's Newspaper Licensing Agency (NLA) will now charge artists, musicians, labels and PR specialists who use review quotes a fee of $2,000! Now for that amount you get to quote 50 reviews, but the precedent it sets is not a good one.

In fact, what ended up happening is when the NLA sent their declaration around to labels and managers, they were promptly ignored. The NLA then stepped up the campaign and began legal action which not only charged for current quotes but past ones as well, which brought the typical charge up to around $10k instead. It's yet to be seen how this will end up shaking out, so for now it stops anyone in the UK from using review quotes.

This action doesn't seem to be helping anyone. The newspaper and reviewer don't get any additional exposure, so that's bad. The artist, label, PR company can't use the quotes, so that's bad too. The newspaper may make a sliver of money that doesn't really help it's bottom line, so that doesn't seem to be worth the bad blood induced. So it seems that there's no winner here.

I understand that newspapers all over the world are suffering a downturn and are looking for new revenue streams, but this isn't the way to do it. It's debatable whether even a modest charge is fair, but this seems like a shake-down.

In the US, quoting a review can be classified as "fair use" and therefore not subject to such a charge, but you can bet that there are a number of company and association attorneys watching this closely.

The Cost To Break An Artist: $1.4 Million

A new study by the IFPI shows that 70% of artists still want to be signed to a label because of the marketing support that a label brings, and that there are more than 5,000 artists currently signed to major labels world-wide. What's more, 1 in 4 of those signings are new artists, meaning that fresh talent is still a priority, according to the report.

The Investing In Music report goes on to say that record labels spend about $4.5 billion annually in A&R, and this a greater percentage of revenue than other industries like computing, pharmaceutical or biotech.

But perhaps the most interesting bit was the fact that the average cost to break an artist was $1.4 million in the US. This was broken down in $200k for an advance, $200 to 300k for recording costs, $50-300k for video production costs, $100k for tour support and $200-500k for marketing and promotional costs.

Those numbers are obviously not for the average record label signing, and it's hard to believe that they're even an average. I guess I don't get to work in the rarified air of a major artist enough any more, but there aren't many artists that I know of that are getting a $200k advance or a recording budget of $200k. And didn't the days of paying $50k+ for a video went away when MTV decided they were better off programming reality shows instead of music videos? And tour support.........that vanished so long ago that most artists consider it a myth.

Once again, if you're talking about a star artist trying to break into superstar level, these numbers might be realistic, but to make it seem like they're average costs makes everyone believe that we're still living in the 1980s.

There are some other interesting figures in the report, some of which you might want to take with a grain of salt. Remember, the IFPI represents the world's record labels, and what they publish is biased accordingly.

Email ThisBlogThis!Share to TwitterShare to FacebookShare to Pinterest
Labels: A and R, IFPI, Investing In Music, music marketing

I'm all for artist branding but there are some things that just feel wrong. Take, for instance, the announcement that a Jimi Hendrix clothing line is set to hit the shelves any day at Bloomingdales. This just seems like outright exploitation in so many ways.

The word is that the clothing line is designed by Lyric Culture, and will include graphic screen print t-shirts, scarves, dress shirts, hoodies and cuff links featuring Jimi's words, music and handwriting.

This feels like it's about 20 years too late to begin with, but it so reeks of cashing-in that Jimi must be rolling in his grave. Admittedly the guy had great style and a flare for the unusually hip when it came to clothes (his music goes without saying), but it feels as much of a money grab by his estate as does Bob Marley energy drinks.

It's a shame that family members can't just celebrate the music of their celebrity artists after they've passed, and instead begin to concentrate on the green. Let's hope that the clothes at least outline Jimi's fashion sense, because at least that would be a small win for ethics.

It was reported last week that Warner Music Group was restructuring following the departure of their former music chief Lyor Cohen. Usually these types of reorganizations are more about consolidating power into new fiefdoms for the remaining or incoming executives, but this one actually seems to make sense.

According to an article in CMU:


Under the new structure, Warner in the US will have three divisions, frontline recorded music, publishing and catalogue, and label and artist services. The first division will consist of Warner’s record labels, principally Atlantic, Warner Bros and Warner Nashville, and will handle current talent and new releases. The second division will replace the Warner/Chappell publishing company, and also include catalogue marketing and the major’s catalogue label Rhino. The third division will bring together distribution operations and those Warner units working outside records and publishing.

The second of the new divisions is the most interesting, with the major allying the marketing of its sound recording catalogue with its music publishing operations.

A couple of things here are interesting. First is that Warner/Chappell is being replaced, which is hard to believe, since it's such a powerhouse brand. OK, brand aside, the fact that they're now combining publishing with catalog is huge, since they're now thinking more in terms of licensing, rather than sales. Licensing can be a much more profitable way to do business, since the overhead is far lower and manufacturing costs are essentially nil because the licensor does it all.

Many have predicted that this would be the business model for the next generation major label. Now it seems that we'll get to see the prototype in action and can evaluate whether those predictions are really valid.