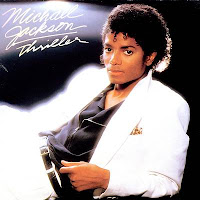 There are some classic albums that continue to sell years, even decades, after their release. The Beatles Abbey Road, Pink Floyd's Dark Side Of The Moon, and The Eagles Hotel California come to mind, but the album that tops all of them is Michael Jackson's Thriller which has just reached the 30 million mark in the US, according the RIAA.

Released in 1982, the album helped lift the music industry from a recession, and has gone on to sell over 100 million copies world-wide.

The album also spent a record setting 37 weeks on top of the Billboard 200 album charts.

While Adele has had some impressive numbers with both her 21 (over 30 million worldwide), and 25 (5 million in the US so far) albums, it's fairly certain that we won't see an album with the sales legs of Thriller again, at least until another consumer-attractive physical format emerges.

It's a different music delivery world that we live in today, so the real numbers to watch are the number of streams and views that an album gets. You know you have a huge hit Thriller-like hit when you hit a billion, as Taylor Swift, Katy Perry and Justin Bieber (among a few others) have found out.

That said, Thriller remains a stellar work that still holds up well today. It's the work of a lifetime that captures lightening in a bottle. About the only thing that doesn't work (at least for me) is the cover, which seems disconnected from the album title.

One of the biggest problems with the growth of the vinyl record industry is the fact that the gear to make them is so old. There hasn't been a new record press machine made in over 30 years, and the cost of maintenance on the old machines is getting increasingly difficult and expensive.

That's about to change as NewBilt Machinery of Germany has introduced a modern up-to-date vinyl press that could relieve the entire industry of the burden of relying on worn-out machines.

United Record Pressing and Jack White's Third Man Records will get the first ones for their respective Nashville record plants. It's also reported that Third Man may also open a plant in Detroit as well, and that most other pressing plants have machines on order.

Believe it or not, there are 21 record manufactures in the United States alone, some using presses that are 50 years old, and most have lined up to purchase at least one new press. At a price of around $100,000 each for a single press system ($161,250 for a duplex system), they're not cheap, but neither is having to pay $5,000 to get a screw machined for an old press, as frequently happens.

Even if you have that kind of cash, there's still a lot more to setting up a plant, as a boiler, cooling tower, air compressor and three phase power is required as well to go along with the highly toxic chemical process needed to make the record stampers.

That said, having new presses available will allow the industry to grow and deliver in a more timely fashion, since it now can take up to four months for an order to be fulfilled.

A feature that many artists, bands and labels have been asking Facebook for is live streaming, and it looks like it's coming soon.

This has been something available to big "verified" brands for a long time, but now the company is beginning to beta test a version that will be rolled out to all users in 2016.

Facebook has been under some minor pressure from Periscope and Meerkat, although their 12 million users combined pales when compared to FB's 1.5 billion. That said, the company hates to be left out of anything related to social media sharing, so look for a new icon to pop up allowing for the live streaming option soon.

Beta testers have found that you'll be able to see both the people that are currently viewing your broadcast as well as the real-time comments.

Facebook's live streaming is different from other platforms in that you'll be able to specify exactly who will be able to see it. That means that you can designate your broadcast to be seen just by your fans, followers, a group, or even a small group of friends or family.

The other thing that separates the upcoming FB feature is that it will live indefinitely in your stream, unlike the limited lifetime for both Periscope and Meerkat.

One disadvantage is that your broadcast can only be seen on Facebook, unlike other platforms where the broadcast can be shared on other networks. With 1.5 billion potential viewers, that doesn't seem like much of a limitation though.

Look out for this new feature in early 2016.

The Extras That Entice CD Buyers 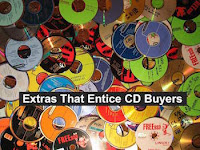 Everyone knows that if you're music doesn't connect, then nothing else matters, but a British study (which I also quoted yesterday) has found that certain extras offered with CDs really make a difference when it comes to making a sale.

As this chart below shows, there are various extras that streaming listeners take into account before purchasing a CD, including (in order of importance): 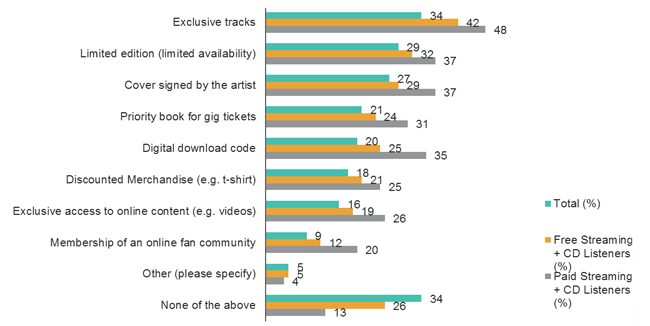 If you're not including any of these extras with your CDs, now's the time to do so, since your potential customers are expecting one or more along with their piece of round plastic.

While nearly everyone in the music industry complains about the decrease in sales, a new study by the British Phonograph Industry (BPI) and the Entertainment Retailers Association has found that streaming may actually be at least partially responsible for whatever sales there are. Of course, this study was conducted in the UK, but it may be significant nonetheless.

The study found that streaming was a way for users to sample music and artists before actually buying. In fact 44% of the respondents that paid to stream said that their album buying habits have either increased or remained the same.

66% of the music fans surveyed also obtained their music from multiple sources, meaning streaming and CD or vinyl. The general consensus was that users streamed to discover, but actually purchased something they fell in love with.

Surprisingly, the results reflected not only older music fans but younger consumers as well, with the tastes of millennials falling in line with baby boomers in this area.

Also, about 33% of respondents would prefer a "one stop shop" where they could stream content, but also buy the CD on the platform if they wished as well.

Finally the survey found that around 40% of all albums are purchased in the final quarter of the year, with about half of these coming at Christmas. CDs and vinyl records are still prime gifts.

It just goes to show that there's still life in the CD side of the business, which may very well be around for longer than industry analysts predict.