Music apps are very popular these days, but it comes as a little bit of a surprise that only one true music app (Pandora) and two apps that are used for music a lot but not exclusively (YouTube and Google Play) are in the top 10 in the US at the moment, according to this graphic by Statista based on data from Comscore.

Perhaps the biggest surprise is that Google Search is not #1, and that two map apps (Google Maps and Apple Maps) rank so high. That said, the chances are good that a new and different music app breaks into the top 10 at this time next year. Care to speculate on which one? 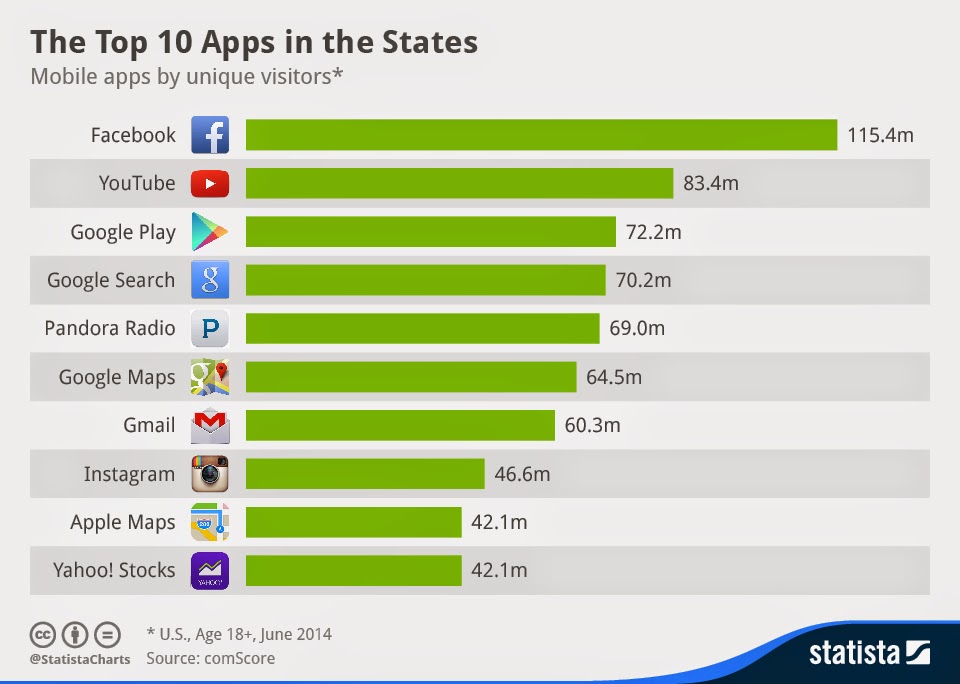 Twitter is all about engagement, but if you don't follow the unwritten rules of etiquette, you'll find yourself with fewer and fewer followers. Here's an excerpt from my Social Media Promotion for Musicians book that explains the 9 Twitter etiquette rules that every user should know.


"This is a fairly simple medium, but there are certain unwritten rules that attempt to keep people from annoying one another. Despite this group etiquette, you’ll still no doubt run into situations that may make you want to scream, but keep in mind that it’s probably bugging others as well. Rest assured that sooner or later the offender gets the message and either mends his ways or leaves. Let’s take a look at what you should know.

1. Don’t use all caps. One of the things that netizens universally hate is someone COMMUNICATING IN ALL CAPS. This is considered the equivalent of shouting, is more difficult to read, and just plain impolite.

2. Don’t be rude. What’s rude in real life is rude on Twitter as well. The problem is that people are more easily offended online because they can’t see any facial expressions or body language, and as a result, what you consider to be a rather harmless tweet can kick up a firestorm. The way around this is to think through every tweet before you send it and stay away from any provocative language.

3. Don’t use an affiliate link in a tweet. Links in a tweet are a good thing, but it’s bad form to include one that’s blatantly trying to sell something or make money.

4. Don’t ask someone for a favor publicly. Just like doing it in a crowded room, it’s uncool. Better to ask in a private conversation. Use DM instead.

5. Don’t auto-DM. It’s possible to set up an automatic direct message welcoming someone when they follow you. Save your time and money as this is considered bad form. If it’s not personal, an auto-DM can do more harm than good.

6. Issue a high volume warning. If you’re going to be tweeting more than normal (like from a show, conference or event), tell your followers in advance. No one likes their Twitter feed to be controlled by one person.

7. Don’t be negative. Nothing turns off followers faster than negative commentary. If you can’t say something nice and be positive, don’t say it at all.

8. Don’t provide too much information. Twitter isn’t a place for details. There’s not enough room in the limited number of characters that you have, which means that you have to resort to more tweets, which puts you into the realm of over-tweeting. As with most things online, less is more.

9. Pause between tweets. Another thing that makes people crazy is a big volley of tweets one after the other. Take a break before your next tweet. Give other people a chance to get their tweets seen as well.

If you'd like to read additional excerpts from Social Media Promotion for Musicians and my other books, go to the excerpts section of bobbyowsinski.com. 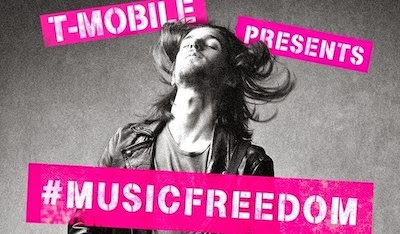 T-Mobile is doing its best to win new customers using music as the incentive with its Music Freedom initiative, a plan where music streams don't count as data against a customer's data limits. In fact, the company recently said that customers have streamed nearly 7,000 terabytes of music, which amounts to around 5,000 songs a day since the service was launched a few months ago.

Interestingly, it didn't add Google Play Music, which turned out to be the #1 most requested platform by its users. T-Mobile ran a survey and after more than 750,000 votes, that was the service that came out on top, yet it's the only one that hasn't been implemented yet.

It's yet to be seen if Music Freedom will add the extra jolt that that T-Mobile really needs to compete with its much larger competition, but its great to see music as such a large part of its new direction.

2014 Is The Best For Concert Attendance In 20 Years

We keep on hearing how bad the music business is, and when it comes to the recorded music part of the business, that may or may not be true. One thing's for sure though, an area of the industry that's definitely thriving is live performances, especially big venue concerts.

According to Billboard's Boxscore chart, 2014 is the best year for concert attendance in 20 years, mostly because so many major acts have added stadiums to their tours this year. In fact, Live Nation has promoted 72 concert shows this year alone, and predict to have more than 100 by the end of the year.

Most stadiums pack in anywhere from 40,000 to 80,000 people, as compared to only 20,000 in the largest music-only arenas and amphitheaters. Whether the sound is better is debatable, but that doesn't seem to be a deterrent to the fans that purchase tickets.

Interestingly enough, the fact that you can play to 3 times as many people doesn't automatically mean that you can automatically make 3 times the money. The costs also jump proportionally anywhere from 2 to 3 times as well, since more sound and video equipment is required, so there's quite a risk involved. The margins on a tour are very thin to begin with, with the promoter getting around 1% and the act around 30%, so any miscalculation can mean a huge bath for everyone involved.

Still, this seems to be a good year to be in the concert business, and business, as they say, is booming.

The music world we live in today is decidedly different from that of only five years ago, let alone a few decades. Where once the entire business was based around physical sales, today its more about aggregating multiple revenue streams for both the artist and the record label. Here’s a set of 9 rules that have been excerpted from my book Music 4.0: A Survival Guide For Making Music In The Internet Age that all artists need to at least be aware of if they want to succeed in our current music environment.

1. It’s all about scale. It’s not the sales, it’s the number of YouTube views you have. A hit that sells only 50,000 combined units (physical and digital) may have 50 million YouTube views. Once upon a time, this would’ve been deemed a failure, today, it’s a success. Views don’t equal sales, and vice-versa.

2. There will be fewer digital distributors in the future. It’s an expensive business to enter and maintain, so in the near future there will be a shakeout that will leave far fewer digital competitors, and fewer places to distribute your music. Don’t be shocked when you wake up one day to find the landscape of online music to be very much consolidated in a way similar to what happened with the major record labels.

3. It’s all about what you can do for other people. Promoters, agents, and club owners are dying to book you if they know you’ll make them money. Record labels (especially the majors) are dying to sign you if you have have an audience they can sell to. Managers will want to sign you if you have a line around the block waiting to see you. If you can’t do any of the above, your chances of success decrease substantially.

4. Money often comes late. It may not seem like it, but real success is slow, and even in this social media world, you still grow your audience one fan at a time. The longer it takes, the more likely you’ll have a longer career. An overnight sensation usually means you’ll also be forgotten overnight. This is one thing that hasn’t changed much through the years.

5. Major labels want radio hits. They want an easy sell, so unless you create music that can get on the radio immediately, a major label most likely won’t be interested. This is what they do and they do it well, so if that’s your goal, you must give them what they want. Once again, this hasn’t changed much through the years. Read more on Forbes.
----------------------------------
Help support this blog. Any purchases made through our Amazon links help support this website with no cost to you.