When it comes to video sites we automatically think of YouTube, but there are a lot more than you think. In fact, if you want to see exactly how many, go to all-video-sites.com for a master list that shows all of the major ones world-wide. Keep in mind that most are very specialized, which limits their ability to grow. That said, here's a list of the largest video sites in terms of millions of unique users, thanks to Comscore Video Metrix. 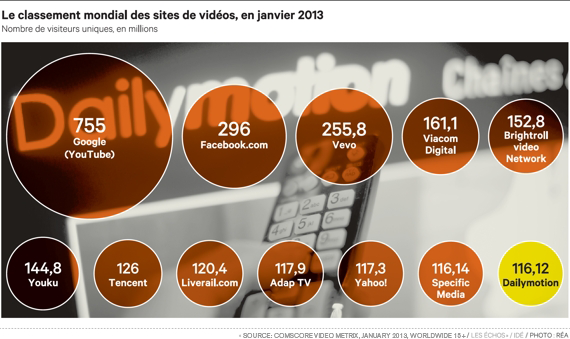 While Spotify seems to get all the credit for the latest big push to streaming music, I think the real champion is Pandora. In fact, whenever I give one of my "Social Media Promotion For Musicians" clinics at a university, one of the questions that I ask is, "Where do you discover most of your new music?" Inevitably, Pandora is always the number one streaming service that the students provide.

Now it looks like there are some numbers to back this up. According to a statement recently released by Pandora, it's now reached 200 million registered users in the US alone, double of what it was only a couple of years ago. As a matter of fact, they also issued some other impressive stats, like:
With so many other streaming services just around the corner, I don't know what Pandora's long-term prospects are, but it's impact right now is massive, even though it may be somewhat under the radar. The bad part is, the business model just doesn't look like it'll work long-term, as it's royalty pay-out is so high that it looks like it can't possibly turn a profit. Digital Music News has a post that describes how it's officers have cashed out more than $87 million in shares since its public offering last year, which is not exactly a vote of confidence in the platform.

Regardless of what happens to the service, we'll look back on it as a groundbreaker, and one of the major reasons why we're in a new music distribution paradigm.

One thing that you'll see in many posts on this blog, in my social media clinics, and in my Music 3.0 book, is the fact that the description plays a huge part in a video's SEO. Most videos creators supply just the bare essentials when writing the description, if that, and you hardly ever see any links.

Well if you want your videos to get more traction, here are a couple of tips:

1. Write a description of about 200 words

2. Put a link back to your website in the description.

Of course, the same can be said for your YouTube channel, as a description is an important part of the way people find you, as is the title of the channel itself.

Here's a good video from ReelSEO that covers those points very well.

The Payout From A Viral Video

As mentioned several times previously on this blog, a viral video on YouTube can pay huge dividends to an artist's popularity, but doesn't necessarily add too much to his pocketbook in the grand scheme of things.

Take Psy's "Gangnam Style," for instance. With over 1.2 billion views, he managed to make about $8.6 million from YouTube, a nice chunk of change to be sure, but it seems way low considering the massive world-wide coverage. Of course, Psy made his big dough from personal appearances and pistachio nut commercials afterwards, which made the money from YouTube look like just a drop in the bucket.

Here's a great infographic that outlines the money made by the 30 most watched music videos, as well as some general rules on what it takes to go viral. It also takes a look at OK Go's "This Too Shall Pass" and the massive effort it took to produce.

Is Nashville's Music Row Over? 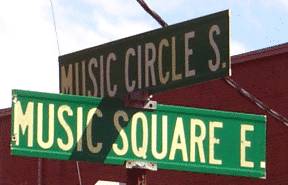 I just came back from presenting clinics in Nashville at SAE and MTSU (a hearty thanks to both for their hospitality) and was struck by how much the music business in the city's famed Music Row seems to be shrinking. While there are still more studios, publishing and management companies, and anything else connected to music that you can think of in a single location, Music Row no longer seems to be the heartbeat of the city as it once was.

Vanderbilt University is slowly but surely increasing its footprint on the row as it buys up available properties, while Belmont University tries to hold the line by buying any of the old classic studios that come up for sale (thanks to the generosity of Mike Curb). But the costs keep rising so many music related business now seem to prefer to have their offices in Berry Hill, which is also where you'll find the hot Blackbird Studios and The House of Blues Studios. Some are moving to the SoBro neighborhood, and others are moving 30 or so miles out of town to Franklin, where rents and general business expenses are much cheaper.

Part of this is due to the way we now do business. With so many engineers, producers and musicians now working in home studios, the camaraderie that we used to have in multi-studio facilities is all but gone, lamented by everyone who was lucky enough to have lived through the time when working in a commercial facility was the norm. We work at home now because it's sonically possible to (thanks to inexpensive yet powerful audio gear), and because it's much cheaper so it's easier to cope with the lower budgets. Same with Music Row. With email, Skype, Facetime and any number of other electronic variations, staying in touch with a client is just as easy as it ever was, even though we're not in the same proximity as the one we're interacting with.

This is the perfect example of our business and personal lives are changing in gradual and subtle ways. We're losing so much of the human touch that at one time was considered necessary in doing business, but nearly instant access is taking its place. No need to schedule a face to face meeting when you get the message in a text or iMessage. Maybe the one place that personal interaction still remains is in live music, but even that's threatened by new services like Concert Window, where live concerts are streamed online (written about here a while back).

All that being said, there's no use lamenting the passing of what's gone before. It's time to embrace what's here now. Our social media and online lives make for a different personal experience in doing business. It will probably be at least partially responsible for the eventual passing of historic icons like Music Row, but who's to say that's actually a bad thing? After all, we don't move forward by looking back.