What Really Makes Up The "Music Industry?" 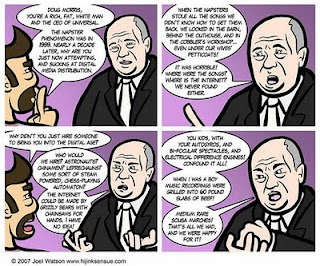 Chris Castiglione wrote a thought provoking article over at Music Think Tank the other day regarding what really makes up "the music industry."

Chris cites a number of articles regarding the demise of the music industry as we know it, but postulates that the death of the industry depends on how you look at it. Until Music 3.0, the music industry revolved around the major and large indie record labels and their subsidiaries, with their trade organization (the RIAA) leading the way. The RIAA has long been the propaganda arm for the majors and those in the know would take their missives with a grain of salt. The further we get into M30, the more totally out-of-touch the RIAA (and hence, the majors) becomes with their pronouncements. That being said, it's foolish to believe that this is the totality of the music business.

In fact, there's more music being consumed than ever before, according to several recent studies, although it's being consumed in different ways and forms, which doesn't fit into the old Music 2.5 model at all. We all know it - everything has changed. The difference is that some of us change with the times and others (the major labels) don't.

So what is the music industry today? Certainly the major labels are a big part of it and still sell an enormous amount of product both digital and physical goods. That number is declining like  crazy (at least 10% a year) so the "industry" as we knew it isn't central to what the industry is today. Publishing is doing as well as ever and even growing a little (a fact hardly ever publicized) so that's not a factor either way. But parts of the industry that were just a rounding error a few years ago now have a significant impact on its overall strength.

The live concert business is growing slightly in revenue, but having a tough time selling tickets lately. Live Nation (soon to merge with Ticketmaster) and AEG have gone into the management and promotion business, cutting deals directly with the artists and bypassing agents and smaller promoters. That's become a bigger part of the industry than days past.

Music licensing is a bigger business than ever even though the individual fees have decreased. There are a lot more revenue streams thanks to the ever increasing number of cable networks.

Brick and mortar record stores and traditional broadcast radio have declined in importance in the "industry", but Internet radio and online music stores like iTunes, Amazon, Rhapsody and Spotify continue to grow. They're now a big part of the industry.

But  perhaps the largest part of the industry is the one that's the most difficult to count, and that's the thousands and thousands (maybe even millions) of independent artists that now have the ability to deliver their music directly to their fans, who consume it in silence, oblivious to Neilsen Soundscan ratings. That's the core of Music 3.0. Even though we haven't had a huge breakout from this group yet, you can be sure that's it's coming.

So the music industry has gone from being built around the major labels to a much more diverse group of related businesses. No one sector dominates like before even though they may be formidable. But the leveling of importance between the industry sectors continues as we speak. Music 3.0 is about artistic democracy, and democracy always comes slowly.
Posted by Bobby Owsinski at 8:54 PM No comments:

One of my predictions about the music industry for 2010 was that subscription music would almost hit critical mass, with Apple's iTunes finally pushing it over the edge when they introduce their own subscription service in 2011. This prediction was based on the premise that Apple's purchase of Lala provided the needed infrastructure to create a subscription service that made it easier than building one from the ground up.

While this seems a reasonable supposition, industry pundits are predicting that Apple has something else in mind for the Lala backbone, and they'll spring it on us at the upcoming "big event" scheduled for January 27th.

The thought is now that Apple will do a sort of hybrid service, moving all of a consumer's purchases to the "cloud" (computer storage accessed via the Internet) instead of having a song downloaded on to your personal computing device (be it a computer or a phone or an iPod). In effect, you get the streaming function of a subscription service but it will still be only of all the songs you purchased. So in effect, you won't be downloading songs any more, you'll be uploading them! You can still have them on your desktop if you want, but you probably won't.

Indeed, the main benefit to the consumer is that you save all that room on your drive, especially if you have a large collection, and you no longer have to worry about high-quality versions of the songs eating up your hard drive. But the real benefit belongs to Apple. They still get to charge you 99 cents (or more) to purchase a song, instead of collecting a flat fee per month for access to unlimited songs. And they don't have to renegotiate any of the licenses with the record labels. The consumer gets a taste of what subscription music would be like, but at no cost benefit.

This doesn't sound like much of a deal at all, especially when the Spotify music subscription service is about to launch in the States soon. I still believe that this move is still a precursor to Apple eventually going subscription, but it's just a ploy to keep the status quo a little longer than had they gone directly to subscription.

Because once the consumer gets a taste of music subscription, there will be no turning back.

Posted by Bobby Owsinski at 8:24 PM No comments:

Top 10 Music Moneymakers Of The Decade

One of the more eye-opening stats about the recent and current music business is who made the most money during the 00's. Here's a list that combines concert ticket and CD sales. Yes, it will surprise you.

4. The Beatles - $627 mill (including Paul McCartney's and Ringo's ticket sales)

What this list tells us is that our assumptions regarding the type of music that is hot may be all wrong. Even though Rap and Hip Hop seemed to dominate the charts during the decade, no artists from that genre cracked the top 10. Only Eminem came in at #14 with $419 mill and he was the only hip hop artist in the top 20.

Who would've guessed that Celine Dion would've been number 1? Or that Kenny Chesney would be number 2? Or Dave Mathews and The Beatles numbers 3 and 4?

The list illustrates just how little radio reflects the buying tastes of the general public, but it also shows that mainstream music artists with major label connections still partake of the biggest piece of the financial pie. That being said, the list is also a reflection more on the era of Music 2.5 than Music 3.0. Let's see what the next 10 years bring.
Posted by Bobby Owsinski at 9:29 PM 1 comment:

Excellent article today at eMarketer entitled "What's Working For Social Media Marketers?" It featured a couple of charts worth a look.

The chart on the left describes the marketing tactics that gather the best response on Facebook both B2B (business to business) and B2C (business to consumer). There's nothing especially new here as it's all just best practices, but the order of success is a little different than expected. Survey's rate a lot higher in response that I would've expected.

This chart provides the most responsive tactics for Twitter. Once again you're seeing best practices in action, but it's interesting that the tactics work better between business and consumers in almost every action.

If you're not using these tactics yet for interacting with your fans, now is the time. The practices have proven to be successful.
Posted by Bobby Owsinski at 8:53 PM No comments:

The NAMM Show And Social Media

I was dumbfounded as I walked around the Winter NAMM 2010 show at the utter lack of awareness that manufacturers and dealers alike have for social media. Of the more than 1500 exhibitors, I only saw a single MySpace address, zero Facebook fan site addresses, Twitter addresses, or anything else remotely tied to social media. In fact, it seems that many companies were even lax with website info, if you can imagine that.

For all the attention that social networking has gotten in the last year, it's penetration isn't nearly as high as we're lead to believe, at least in this space. I do have an explanation, however.

1) Let's face it, everyone in a small company is overworked. Each person wears a number of different hats and it's pretty much impossible to do anything particularly well with so little time to spend on each task. Social networking is time consuming, and there's just not enough hours in the day to get it done, even if you're aware of the potential benefits.

2) Most PR firms are blissfully unaware of social media. The ones I spoke with told me about attending seminars to learn about it, so they're still neophytes themselves, but even they didn't have the time to get their arms around the discipline for their clients.

If the musical instrument industry, which is relatively hip, has these problems, can you imagine what other industries are like? The bottom line is that there's a real opportunity for a social PR company to take up the considerable slack that's being left by existing PR.

By the way, Jet City Amplifiers, a brand new amp company, is one of the few exceptions, with a pretty good Facebook and Twitter presence that has stoked their sales considerably right out of the box. 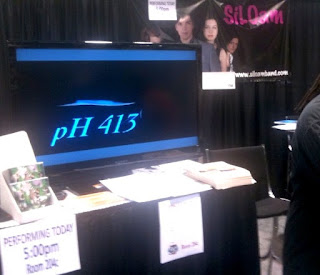 On another note, I did see one band that was thinking out of the box at NAMM. The Siloam band had one of the worst spots on the exhibit floor (obviously it was cheap) but they were touting their wares with a video and live performances. I don't know if NAMM is the right venue, but I do like the fact that they were trying something out of the norm.
Posted by Bobby Owsinski at 9:06 PM 5 comments: