Every month I write an article on recording for the Envato AudioTuts+ website. It's actually a premium piece, meaning that you have to pay for it or subscribe to the site to read it. That said, Envato also has a wide variety of other types of similar sites that cover just about anything that's creative, as well as audio.

Adam Everett Miller writes on Aetuts+ and has put together a collection of tips about emailing clients called 5 Client Emailing Tips Worth Forwarding. Here are his tips, which I've changed slightly to pertain more to the music business:

1. The subject line shouldn’t be just “Hey”. What reason would anyone have for opening up an email with a subject line like that? With everyone getting tons of wanted and unwanted spam every day, you have to give someone a compelling reason to open that email. I know some people that spend more time on the subject line than on the entire email, but that may be a little extreme. Just putting a little thought into it goes a long way. You have to both tell a story and be provocative enough to make someone curious at the same time though. Want some good examples? Look at the titles of the bloggers that you follow.

2. Include your info in your signature. If people want to contact you, they shouldn't have to go through a game of hide-and-seek to find your info. The very minimum that you should include is your website, your email address, your Facebook page and Twitter address. Don't forget to include your YouTube channel either.

3. Use BCC when you send a mass email. People feel it's a violation of their trust if they see that their email is broadcasted to 50 other people on a list. At the very least, use a blind carbon copy, or BCC, which shields the email addresses for the other sendees. Even better, use an email service like iContact or Constant Contact when sending to a really large list.

4. Remember that emails are permanent. This has nothing to do with email etiquette or strategy and everything to do keeping from embarrassing yourself. Once you send an email, you have no chance of getting it back. If there's anything that you feel remotely uncomfortable about, don't send it.

5. Include a call-to-action. You're sending the email to either inform your fans or market to them. Readers are more inclined to act if you ask them to. Don't forget to include "Buy it here," "Order it now," "Click for more info," or even "Send me your comments," style links in the email.

These 5 steps are easy and can make a subtle, yet perceptible difference in your email presentation. Use them wisely.

Songwriters May Soon Get Their Rights Back

Recently there have been articles all over the Internet and newspapers about how songwriters like Billy Joel and Bruce Springsteen will be able to get their some of their publishing rights back very soon.

The reason is that in 1978, Congress passed a new Copyright Law that stated that after 35 years, songwriters would be able to reclaim publishing rights from record labels. That date is coming on January 1, 2013, after which artists will have a five year window from the time their song was created in which they can petition to reclaim their rights. Artists still must file termination notices at least two years before the date they want to recoup their work, and if they fail to act, their right to reclaim their work lapses.

So why would a record label own their publishing in the first place? Even back before so called "360 deals," record labels knew that the real money in the music business was in publishing, so a stipulation of most recording contracts was that they would assign their publishing to the company's publishing company. For a new artist this wasn't such a bad thing, since that usually meant that they got an additional advance, and a large publishing company could place the songs in places (like movies) that a small one didn't have access to.

Still, after you've had some success and you see at least a quarter (maybe even half) of your songwriting income going to the label's publisher, it does give one pause. Today there are so many less expensive alternatives to a major publisher that it would seem that the only songwriters who pass up this opportunity will be those with real estate attorneys acting as entertainment attorneys. Bob Dylan, Tom Waits and Loretta Lynn have all filed petitions already; they'll get the snowball rolling down the hill. Are you or someone you know eligible?

Sometimes A Simpler Video Is Better

Want to see a great example of a compelling music video that's dead simple to produce? Here's one by The Barr Brothers that is the essence of simple, yet it's very effective. In it the band sets up in the alley behind their studio and basically does an unplugged performance in front of a single camera. The band can pull it off because they're the real deal, which makes me want to like them even more.

Also check out this clever video from the same band as they take on the music industry and announce their new release at the same time, again in cheap yet very effective way.

Sell A Million And Make Zilch - Another Example 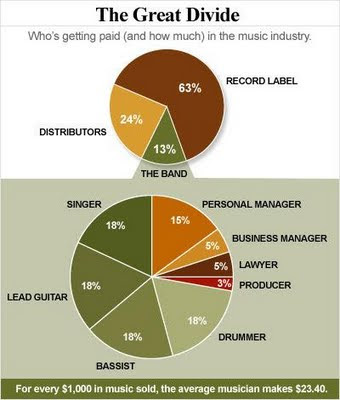 Yeah, it sounds really cool to get a record deal with a major label. Wow, you're label mates with Coldplay, or Brittney, or Nikki, or Bruno. The problem is, the chances are that even if you go platinum right out of the box, that doesn't mean you'll make any money. As you can see from the graphic on the left, there's not much left over after all the bills are paid.

Here's an excerpt from an eye-opening article in The Root that should be a must for any artist contemplating a deal with any label. It outlines the various places that the money goes from a record sale.
---------------------
"SLRP: The suggested list retail price of a CD is currently $16.98, while the standard wholesale price -- what retail stores pay the label per CD -- is about $10. Once the retailer gets the CD, they can sell it for however much they'd like -- hence "suggested." Artist's royalties are a percentage of the retail price. Superstars can get 20 percent of the SLRP, but most get 12 percent to 14 percent.

Packaging charge: 25 percent of the SLRP goes back to the record company immediately for what's called a "packaging charge" -- that's the label literally charging the artist for the plastic case in which his or her CD is sold.

Free goods: In essence, "free goods" are a roundabout way for labels to discount records so stores will be more inclined to buy them. So rather than sell Best Buy 100,000 records at the regular wholesale price, the label will sell them 100,000 records for the price of 85,000. The artist is then paid for the 85,000 CDs, not the actual 100,000 sold to the retailer.

Reserves: Records, especially records by newer artists, are generally sold with the caveat that retailers can return to the label whatever copies they don't sell for a full refund. Thus to ensure they don't lose too much money on artists, record labels will sometimes pay artists for only 65,000 copies out of 100,000 copies, just in case 35,000 (25,000 if you consider the free ones) are returned. If the retailer ends up selling all their copies, the label will then pay the artist the balance owed, which can sometimes take years.

Distributor: Music distributors are entities designed to promote and distribute records. The major labels maintain in-house distributors, while most all indie labels use private distribution companies. For smaller bands' records, the distributor can take as much as a 24 percent cut of the SLRP; bigger bands might only be charged 14.2 percent.

Songwriter/publisher: If an artist doesn't write his or her own music, someone else has to. And someone who writes a song must first go through a music publisher, whose job it is to place that song with a recording artist who will agree to perform it. If an artist buys the song, the writer and publisher then receive 9.1 cents for every copy of the song sold, a sum they must then split.

Personal manager: This manager guides the career of the artist and gets about 15 percent of the artist's gross earnings.

Business manager: This manager is the artist's money man, making sure the musician repays his debts and invests his earnings wisely. A business manager charges 5 percent of an artist's gross.

Lawyer: While it's not always the case-many charge hourly-some artist's lawyers charge 5 percent.

Record advance: Unlike touring fees, of which the record company can only recoup half, record advances are 100 percent recoupable. That means that if the label fronts an artist $75,000 to pay for whatever he or she needs to record an album--studio time, new instruments, etc. -- the artist then owes the label that initial $75,000, regardless of whether the record is a success or not."

Depressed yet? Don't be. Hit artists have always made 90% plus of  their money on touring and merchandise, but if you have a 360 deal where the label gets a piece of your touring and merch income, that job at McDonald's might be looking better and better.

Posted by Bobby Owsinski at 9:32 PM No comments:

Here's an infographic by the International Federation Of The Phonograph Industry and brought to my attention by Digital Music News, which is the world-wide trade group for record labels. Keep in mind a number of things when you read it:

1) We're talking about a major label making this kind of investment.

2) Although for a new artist this was somewhat common even 10 years ago, an expenditure like this is more the exception than the rule.

3) If I were artist X or artist Y, I'd probably say, give me a small fund and a higher royalty rate, and let me pay for as much as I can myself, including promotion. There's a lot of money going to waste.

4) This is why the major labels are in the state they're in today. 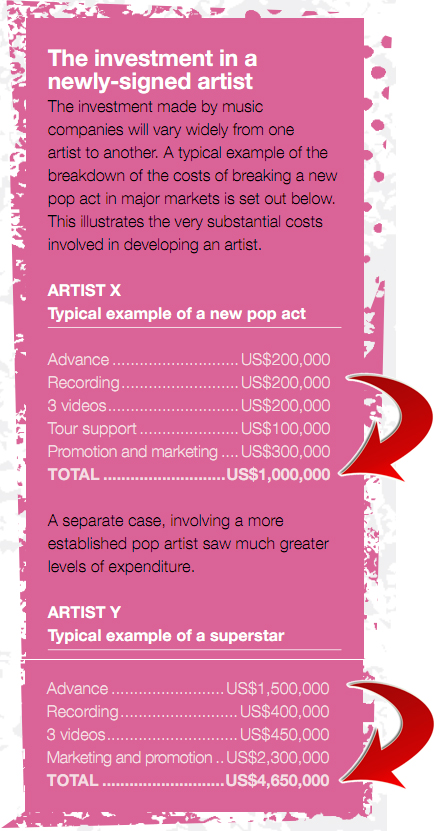