The Problem With Concert Tickets 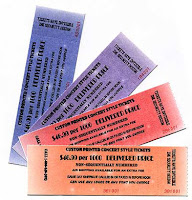 We all want to have a fair chance at a good seat when tickets go on sale for a concert, but increasingly that's becoming a pipe dream as scalpers and third party brokers swoop in to buy them all up. These are then sold back to the public at an enormous increase in price. Add that markup to the service charges, premiums, parking, and general high ticket costs, and you have the situation today where ticket prices are so high that people can only afford to attend a show a few times a year.

There are ways around this, like electronic ticketing on your phone, or tickets that you print yourself at home, but believe it or not, there are actually laws against that in some states like New York. How a law like this benefits the public I don't know, but it sure does benefit the ticket brokers.

Green Day thought they found a way around this for a concert at the Barclay Center in Brooklyn in April. They came up with the idea that fans could only pick up tickets on the day of the show at "Will Call" at the venue. That way, brokers and scalpers wouldn't have a chance to get their hands on them, and everyone would pay a fair price, especially for the premium tickets on the floor.

It turns out that fan protests caused them to relent and revert back to selling the old fashioned way, making the brokers happy and the fans a bit poorer.

Why did they protest? Many fans felt that by only having the chance to pick up a ticket by showing an ID right before the concert, their rights were violated. The Fan Freedom Project insists that when a ticket is purchased, it's then the property of the fan, who then has the right to sell it, trade it, give it away, or use it as he so pleases. Other fans were upset that they would have no recourse than to eat the money if they couldn't attend. Of course, the brokers thought that the band was skirting the electronic ticket law, and were prepared to bring a lawsuit.

It seems that something that should be so easy, like purchase tickets to a concert, will remain in the dark ages at least for the near future.

What could be better than a short 140 character message? How about a real short video? Twitter recently launched their answer to video, called Vine, and it lets users share video clips of up to 6 seconds on social networks like Twitter, Facebook and the Vine platform itself.

While 6 seconds doesn't seem like much, professional broadcasters will tell you that it can be a lifetime, especially where every half-second increments count. That's why Vine may be the next big social thing, since it's easy to both create and consume, and just like Twitter, is perfect for our short attention span world.

Want a quick look at some vines? You can start off by going to Vinepeek, an unmoderated real-time stream of Vines from all over the world, but if you want to get started posting vines yourself,  go to the App Store (it's an iOS app) and download the Vine app.

When you first open it, you will be asked to log in either with your Twitter account or email address, then you'll be asked if you want to receive push notifications and to let Vine access your location info.

After you've signed in, you'll be taken to a landing page where you'll be served up an editor's choice of Vine feeds until you start following the people that you choose.

To create a Vine, press the camera icon on the top right of the home page, which will take you to a new page that features a camera view, a status bar and and X to exit. To record, hold your finger on the screen, where you'll see the green status bar indicate how much you've recorded. Remove your finger and Vine will stop recording. You don't have to record all 6 seconds at once. You can record for a few seconds, stop, set up for a new shot, then record again for sort of a stop-motion movie.

6 seconds can be a lot longer than you think, but it's still short enough that people are much more likely to watch a Vine than a regular movie. Now go get Vining!

Just about the time you thought that the issue of piracy was at least somewhat behind us comes a new threat, thanks to some US foreign policy. It seems that the government of the small Caribbean island of Antigua is angry at the US government for applying trade sanctions in order to prevent it from being used as a base for Internet gambling. This has been exacerbated by the fact that the World Trade Organization has actually ruled in favor for Antigua's right to host the gambling sites, which the US has chosen to ignore.

In an act of revenge, Antigua is now set to host servers that will allow users to download copyrighted music, movies, books and software, in order to make up for some of the lost revenue from gambling. The problem for Antiqua is that any revenue stream from illegal downloads will probably be pennies on the dollar as compared to what they received from gambling, so you can look at the move as using copyright protection (or lack thereof) as a way of trying to force the hand of the US.

You might think that since it's known where the servers are, that it would be easy to block them, but that's apparently not the case. By the use of a virtual private network (or VPN), the traffic to the illegal content is routed through another country or countries, making it extremely difficult to trace.

This might all be a moot point when it comes to music anyway, as the world is quickly moving to streaming audio as the favored way of consuming music. Even without Apple's participation (which may come soon anyway), the masses are quickly learning that it's a lot better to rent than own.

In the meantime, it will be interesting to watch the fight ahead between David (Antigua) and Goliath (the US Government).

It was only a matter of time, but Google+ is now the second most used social network world-wide, according to a study of network activity in December by Trendstream. While Facebook had 693 active users, Google+ followed with 343 million. YouTube was third with 280 million.

But YouTube is owned by Google, right? You can make a case that we could combine the numbers for Google+ and YouTube, but that would still give you only 623 million, a good 70 million short of Facebook. That said, don't forget that there's been a huge swing to online work tools like Google Docs, which might make up the difference.

Then again, it's difficult to be sure what constitutes an active user on Facebook or any other network either. If you have Facebook on an open tab of your browser all day, does that constitute as active? That's why we shouldn't get all that wrapped up in the number details of any study, but instead just look at the overall trend. That means that Facebook is still king of the hill, but Google+ now can easily claim #2.

You can find some great additional info in an article at Forbes.

On Friday we looked at Part 1 of the 2012 Web Numbers, today we'll look at Part 2, which encompasses the numbers for social media, search, mobile, video and images. As with Part 1, the numbers are just staggering.