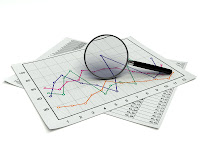 One of the things about Music 3.0 is that we can finally measure exactly what the buzz is. Here's a way to interpret your Google Analytics data to see just how successful you website really is. Thanks to Hubspot for the definitions.


1. Unique Visitors - That's the total number of individual visitors to your site during a specific period of time, not counting repeat visits by the same individual. Obviously, if this number continues to increase, you're doing well.


2. New versus Repeat Visitors - This is a comparison of your unique visitors vs. the number of visitors who came back more than once. Although it's great to have repeat visitors (and you really need them), a rate higher than 30% means that you're probably not growing your audience quickly enough.

3. Traffic Sources - This is a breakdown of the specific sources of traffic to your website. There are two - Organic traffic comes from a link found on a search engine results page. Referral traffic comes from a link on another website. This tells you how well your search engine optimization is doing. A referral level of about 30% is what you're looking for.

4. Referring URLs - This is the specific, non-search engine URLs that send traffic directly to your site. They represent the inbound links that are crucial for boosting your site’s search engine rankings and tells you which  sites or bloggers are linking to your site and what type of content they tend to like.

5. Most/Least Popular Pages - This is a comparison of the pages on your site that receive the most and least traffic that tells you which kind of content your visitors prefers.

6. Conversion Rate - This is the percentage of visitors to your site who take a desired action, such as purchasing a product or filling out a lead generation form. This tells you how well you're converting leads into fans or customers.

7. Bounce Rate - This is the percentage of new visitors who leave your site almost immediately after arriving, with no other interactions. A high bounce rate means that your visitors don't find your pages particularly compelling.

Interpreting the above metrics should give you some idea of just how well your site is performing. Hubspot has a bit more on all of these points, plus a few more, if you're interested.

ReelSEO recently posted a video called "5 Tips For Optimizing Video For Mobile Users" that had a number of good points. I'm going to save you the 6 minutes it takes to watch it by giving you the tips below.

As my recent post about mobile video engagement indicated, viewers watch videos a lot longer than they do on their desktops. In order to maintain their attention, take note of the following:

1. Avoid using tiny text. Make sure any text you use is readable on any screen that the video might be viewed on.

3. Make sure to include links in the video description. A video without links to your site is an opportunity wasted. You want them to continue as a fan, so be sure it's easy for them by including a link.

5. Test the video on your own phone before you upload it. What good is it if it doesn't get the point across? The only way that you'll know for sure is if you test it.

Good tips to keep in mind the next time you make a video. Remember that it's more than likely that a great number of your viewers will be watching on their phone. You can watch the entire clip on ReelSEO.

3 Features Of Google+ Especially For Artists

Many Facebook users are still doubters about Google+, but the network is growing like a weed so if you're an artist or a band, you just can't ignore it any more. While Facebook still dwarfs it by a factor of 10, remember that it was only introduced 6 months ago, and at the rate Plus is growing, it won't take long for it to catch up. As a matter of fact, estimates that just came out today that expect it to grow to 400 million users by the end of 2012, which is about half of that of Facebook in only 18 months (it took Facebook 4 years to get to Plus's current numbers).

That said, Cyber PR maven Ariel Hyatt of Ariel Publicity wrote an excellent article on Music Think Tank about why Google+ is now a must for any band or artist. Here's an excerpt.

"The Band Page
This is the quintessential feature that you all must be familiar with. A Google + Band Page is a page that you can make, just like a Facebook Fan Page, that caters directly to musicians.

It is crucial that you sign up for a band page as soon as possible so that you can solidify the URL and Band Page name to remain consistent with the rest of your social presence. This process is very simple: 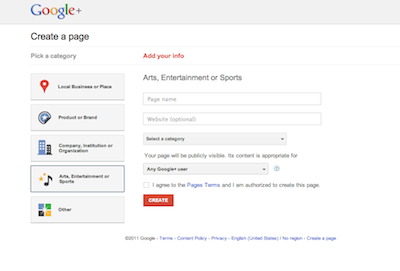 Once you sign up for a Google + account, you will see a link to ‘create a page ’ on the right side bar towards the bottom of your profile.
From here, all you need to do is select the ‘Arts, Entertainment and Sports’ option and create the page!

It is truly that easy and will make a HUGE difference in your overall online visibility. Of course, you want to make sure you complete your Google + Band Page with a Bio, Hi-Res pictures of yourself or your band. Unfortunately at this point in time, Google+ Band Pages still don’t have a way for you to upload music directly to the page, so you’ll want to use this page primarily to engage your fans.

Google +’s Circles are THE core function of the website and is how Google + positioned itself as a unique competitor in the social networking market.

As far as you need to be concerned, Circles are really just lists. See, Google + functions similarly to Twitter in that you can simply follow anyone you’d like without needing their approval by adding them to a Circle. The Benefit of this is that you can create separate Circles for all of the different people and resources that you need to stay on top of. Here are a few types of Circles that I suggest you create:


So what is Google Hangout? Simply put, Google +’s hangouts is a free and easy to use video conferencing service similar to Skype (actually, Facebook’s introduction of Skype video chatting was a response to Google +’s introduction of Hangouts). The reason this service is so important for emerging musicians is because it allows you expand the face-to-face time with fans to beyond just live events.

+1
Before Google+ was in the running for the social media contender, Google introduced it’s own form of a Facebook Like button called the ‘+1 button’. Then, when Google+ was launched, the +1 button became a fully integrated engagement marketing tool, allowing anyone to ‘+1” any page with the button, which not only acts to help the page rank higher in Google searches, but it now also appears on that person’s Google + profile.

So what does this mean? Well, it doesn’t mean much in terms of how you use Google +. But it does mean that the +1 Button is now an absolute must, along with the Facebook Like button, on your website and blog! Including this will turn your website into an easily sharable, highly visible site on Google +."

You can read the entire article here. Ariel has also posted a number of helpful videos from Google as well.

Here's a number that shouldn't come as a shock - tablet users have a longer video engagement than desktop or phone users. A company named Ooyala recently completed a study that determined that tablet users watched 28 percent longer than the desktop average.

They also found that tablet viewers are more than twice as likely to finish a video than on a desktop, which was about 30 percent higher than that of mobile devices.

The study also found that desktops and laptops are more likely to be used for short video clips, whereas videos that are 10 minutes or longer make up 30 percent of the hours watched on mobile devices, 42 percent on tablets, and nearly 75 percent on connected TV devices and game consoles.

In a bit of a surprise, Facebook has jumped into third place among the biggest video platforms, with an estimated 51.6 million people watching videos on Facebook in July when the study was done. Ooyala also found that Facebook is across the board a more popular means of sharing video than its social media rival, Twitter. In the U.S., for every one video shared on Twitter, over eight are shared on Facebook, but that varies widely depending on the region. In Japan, there’s a 1:1 ratio, whereas in Italy Facebook is 17 times more popular.

To read the full Ooyala’s study, download it out here.

We're going to start the new year off with a clip from Topspin CEO Ian Rogers' excellent web show This Week In Music. This is with Richard Jones, the manager of The Pixies, who discusses DIY even for a band with international visibility.