What Your Site Visitors Hate

Recently a friend asked me to critique his website. While it was slick and modern, there were a number of problems that both he and his designer overlooked. Here's a short excerpt that covers a number of those items from my upcoming book, Social Media Promotion For Musicians, about the things your site visitors hate.


"Technology marches on, and as we know, the pace seems to get faster and faster all the time. The problem is, we all have to keep up in order to both stay relevant and keep our fans engaged. Now comes some research courtesy of getsharesquare.com (a site that helps mobilize your site) that’s an eye opener in terms what visitors really hated about artist’s websites.
This is a fascinating report in that it indicates that a lot more commerce could be going on if only artists would pay more attention to their websites. Many artists take their site for granted, but it should be the main point where all of your fan contact is directed since it's the one portal online that you have total control of."

Interested in the Music 3.0 archives? Buy The Music 3.0 Guide To Social Media for the best of over 800 posts.

For anyone who discounts the influence of Twitter, understand that when other mediums begin building programming around it, you can no longer afford to wait to finally jump on board. It's amazing how many musicians still discount the social network, but it's quickly becoming the center of online social life, maybe even more so than Facebook.

The latest example of how important it's become is a new television show based around Twitter trending music topics called "Trending 10." The new show will be shown on the Fuse cable music channel and be sponsored by Trident gum. It's scheduled to air weekdays at 4:30PM.

The idea of the show is to feature the top 10 music-related Twitter topics of the day, which is determined by Fuse's "heat tracker" algorithm, and look at which musicians are the most discussed. The show will also feature interviews and articles, but everything will be based on the latest music trends on Twitter.

It's unclear if Twitter actually has a part in the show, but it does show that at least one channel thinks it's significant enough to build a show around it. I'd say that's a pretty good indication of influence. More on Trending 10 on the Fuse website.

Social networks can be very powerful, and many fans will pay for exposure on them, as singer Trey Songz is now finding out. The artist, who's had a number of big R&B hits, began his own private social network via a smartphone and tablet app called Trey Songz - The Angel Network, and has been reaping the reward with as much as $50k of revenue per month since it was launched in December.

How? Well, it's not from app sales, which would only be a one-time fee a best. In fact, TS doesn't even charge for the app; it's all about what happens later.

In fact, fans pay for the privilege of being an "Instant VIP" to have a profile picture appear high on a board, pay to send TS an email, and pay for virtual goods. In fact, it's been estimated that some fans are paying as much as $32 per month during the course of their engagement.

The fans don't use actual cash in any of these transactions, instead purchasing 250 credits for $1.99. Bidding credits for higher profile picture position can go anywhere from 2,500 to 5,000 credits, while sending Trey a message goes for a mere 100 credits.

The irony is that TS doesn't even engage his fans on the app all that often, checking in briefly only a few times per week. That said, that doesn't seem to deter his primarily female audience, as more than 45,000 of his estimated 5 million followers have downloaded the app. That means there's still some obviously room for growth with his fan club, but it's a healthy start so far.

What this proves is that fans indeed crave engagement, even if it's with one another. Point them in the direction of a mutual cause or artist, and they thrive if the right environment is presented.

I'm not sure that the Trey Songz social app is directly transferrable to other artists as is (maybe for Justin Bieber), but it is an interesting case study. More on this to come as the app matures.

LMFAO Sues Management For Getting Them Work

A good manager gets his act work, but in California and New York that can mean some pretty negative consequences down the line. When a musical act is first starting out they have no leverage, not hits and no juice, so most promoters and agents won't take a chance (as many of you probably know only too well). In this early career stage, a good manager is the only thing between them and obscurity. The act needs work and the manager does whatever he (or she) has to do, which means booking gigs without the help of an agent.

But the problem is that in California and New York, this is illegal as an agent always must be involved thanks to a law known as the Talent Agencies Act. As a result, many an act has used this law to break their contract with their manager after becoming more successful. For example, here's an excerpt from Chapter 27 of producer Ken Scott's memoir Abbey Road To Ziggy Stardust where he describes the same situation he endured as manager of Missing Persons.


"Even though I had a contract with them, they found a way around it in a way that could only happen in California or New York. There’s a very strong law in this state whereby a manager cannot ”procure employment” for an act, only a licensed talent agent can. It’s an arcane law more designed to protect the movie agents of the 1930s than a music artist of today, but it is a law. Well, early on I got them an appearance on Solid Gold, which was one TV show that helped them sell a load of records. Since they got paid scale for it, that meant that I, the manager, had gotten them employment. As a result, they threatened to take me in front of the California labour board, which could have ended up turning out very badly for me. If you go in front of the labour board as a manager and it’s found that you did indeed procure employment, then the labour board can determine that the contract that you have with the band is null and void and never existed, thus any monies you had received because of that contract have to be paid back to the band. That’s what happened with the band Weezer, and both Ke$sha and Lady Gaga are bringing the same action against their former managers right now so they don’t have to pay them commission."

Now the same situation plays out again with a twist. LMFAO's former management company RPMGRP is suing the act for $7 million in commissions it feels it deserves after the act fired the company and poached two of it's employees to act as salaried managers just as the band was hitting it big. LMFAO claims that because RPMGRP got them jobs at various parties and clubs in the early days of the band, their original contract is null and void thanks to the TAA.

This can be a pretty cut-throat business sometimes, but the spirit of this law stinks as it's a no-win situation for any manager. Management is a key commodity in the music business these days, but you'll see fewer and fewer managers taking chances on young acts as long as a silly law like TAA is held over them.

For more excerpts from Abbey Road To Ziggy Stardust and other books, go to bobbyowsinski.com.

Check out my Big Picture blog for discussion on common music, engineering and production tips and tricks.
Posted by Bobby Owsinski at 10:30 PM No comments:

Should Artist Royalties Be Private? 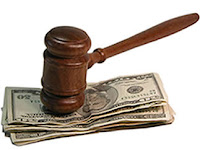 There are so many things in life that are meant to be private yet turn up before the public. Executive salaries, artist contract riders, tax returns, rehab, criminal and medical histories are just some of what comes before our eager eyes on a daily basis. There's a school of thought that says that a celebrity's total life should be totally open to whatever scrutiny the public desires, since that's what the artist signed up for in the first place. Others believe that some things are sacred in their privacy, regardless of how popular you are.

One of these privacy battles is now being played out in the class action lawsuit against Universal Music Group over digital income. After the successful appeal by Eminem's production team against UMG in 2010 where the court agreed that a digital download was subject to a license fee rather than a royalty, other artists like Rob Zombie and the estate of Rick James were quick to sue UMG in order to gain the same advantage. After all, earning 50% of the license income from a download is far better than the 15 to 20% a royalty would generate.

The real problem comes from the fact that the attorneys in the matter want UMG to turn over the sales and royalty data from other artists not involved in the suit so they can have enough information to calculate the damages. UMG has balked, more from the standpoint of self-preservation rather than a defense of their artist's privacy rights. It's now up to a judge to decide.

The problem is that each artist has a slightly different contract, and of course, their sales are different, which makes you wonder just how useful the data would actually be even if turned over.

While various approximations of artist sales have always been around, the exact numbers have always been somewhat of a mystery, sometimes even to the artists themselves. While definitively determining that number might not be such a bad thing, having the terms of one's contract available to someone else's prying eyes can only open up a can of worms for all concerned. Sometimes things are better off left private.