Twitter is a vast repository of all sorts of data on trends and users, but that data isn't always easy to delineate, even for Twitter. Now a new venture with former Warner Bros top exec Lyor Cohen's new 300 label intends to take advantage of the social network to discover new music trends and artists bubbling under the radar.

Under a joint agreement announced at the recent MIDEM conference in Cannes France, 300 (who’s name was derived from the movie of the same name) now gets to organize Twitter's music data, including some that's not available to the public, like location tags that shows from where tweets are sent. The company also plans to develop software around the information that might also be useful to musicians, record companies and publishing companies.

The venture is important for the Google backed 300 (Google is its largest investor), but it’s also important for Twitter as well. Just the fact that it’s accumulated a treasure trove of data over its seven years of existence isn't doing the company much good at moment, but having a partner make new use of it in one sector could give it ideas on how to repurpose other data specifically for other industries as well. Read more on Forbes.
----------------------------------
Help support this blog. Any purchases made through our Amazon links help support this website with no cost to you.

No Talent? You Can Still Make Money On Spotify

For those who think that streaming services like Spotify can't be gamed, think again. A guy cranking out off-the-cuff improvised songs without a hint of production made $23,000 last year by thinking outside the box and providing titles just interesting enough to have lots of people click to listen.

In fact, Matt Farley has recorded more than 14,000 songs that have made their way onto Spotify and iTunes under a variety of names that range from The Toilet Bowl Singers to The Detroit Sports Band. The songs range from birthday songs (with different names in the title to get you to click on your birthday) to topical commentary about celebrities, musicians, politicians and anything else in the news. His Spotify playlist is 11 hours long!

Basically what Farley is doing is flooding the market with songs that trigger thousands of keywords. Do a search for a song using a keyword, and it's likely that one of his songs will pop up as well, and even more likely that you'll take a listen out of curiosity.

Farley records on some dated and inexpensive digital equipment, then snail mails a CD to CD Baby for digital distribution. He's done this approximately 500 times, which must be some kind of record for an individual artist. Obviously, production is not an issue here.

He's also discovered some rather obscure rules that most musicians and aggregators aren't aware of because they don't deal in the volume that Farley does. For instance, iTunes limits the number of songs on an album to 100, and most distributors will not take an album from a band that blatently posts its contact information on the cover.

This is so creative in its own way that you have to give the guy props. Sometimes ingenuity transcends talent. Read more about Matt Farley in this excellent article by Ryan Walsh.

The 20 Most Watched Artists Online

We're now beginning to see some interesting music industry numbers for 2013 become available, and some of the most interesting is the artists that were most watched via online video services like Vevo, YouTube, etc. The chart below has a number of surprises, including K-Pop star PSY leading the pack at more than 2.2 billion views.

Artists with American top 10 hits are overwhelmingly present on the chart, with the exception of Gummibar (children's music) and Super Junior M (a K-Pop boy band). Electronic music is also present, represented by David Guetta, Avicii and Skrillex.

Still, after looking at the chart, one has to wonder - which came first, the video views or the top 10 airplay?

Has The Superstar Torch Been Passed To Bruno Mars? 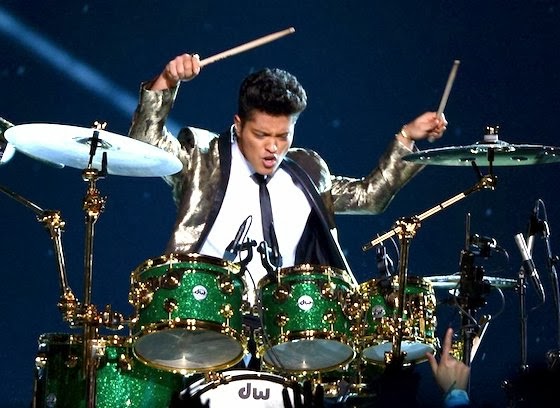 For a number of years now, those in the higher echelons of the music business have worried about a lack of upcoming superstars who might be able to sell out stadiums for decades to come after the current legends stop touring. Of course, there may not ever be another Rolling Stones or Eagles, but one still wonders if recent big hit recording artists like Taylor Swift, Katy Perry or Kenny Chesney have the long-term longevity that the concert industry needs to sustain into the future.

Perhaps the one with the brightest future is Bruno Mars, who just capped off a winning Superbowl half-time concert that brought him a level of exposure that could hasten his already accelerated race to the top. In a scintillating performance, Mars showed the craft and confidence that could well cement him as a superstar for years to come.

To some degree, Mars (real name Peter Gene Hernandez) was a both a stretch and a risk for the National Football League. After years of presenting well-established stars like Paul McCartney, Prince, Tom Petty and the Heartbreakers, Madonna and Beyonce (who graced the stage last year) for their Superbowl half-time shows, having someone who hasn’t quite attained such legendary status caused some to question the wisdom of the NFL’s choice. In order to hedge their bet, the league added California funk-rockers Red Hot Chili Peppers to the bill for one song. This actually turned out to be a fit since Mars has credited them as a major influence in the past, and their music, while more agressive in nature, meshed well with Mars.

Still, Bruno could have easily carried the show by himself, as he proved with his excellent high-powered performance. After selling 10 million albums in just a three year period (quite a feat in this new music business we currently live in), with four #1 records, 18  Grammy nominations (!!), more than a billion YouTube views, and a well-earned reputation as an spectacular performer, the NFL should have stuck to their initial plan and let the man do his thing sans guests. Read more on Forbes.
----------------------------------
Help support this blog. Any purchases made through our Amazon links help support this website with no cost to you.

Many artists and bands are often uncertain about the correct procedure for sending emails about a gig or show to their fan base. How many is too much? How few is too little to get enough bodies to the show? Here's an excerpt from the Email Newsletter chapter of Social Media Promotion For Musicians that provides some effective guidelines for reminding your fans of your show.


TIP: When sending out multiple emails in a short space of time, be sure to continually change the headline and the email contents."