The Most Popular Social Networks For Young Americans

While we continue to hear about Americans ages 12 to 24 fleeing Facebook for other apps like Snapchat, Vine or WhatsApp, the evidence just doesn't square up with the facts.

While it's true that Facebook usage in that age group is lower than before, the social network still has a commanding lead over any of its competitors.

Here's a chart by Statista based on data published by Edison Research and Triton Digital that shows just how much 12 to 24 year olds actually use each of the most popular social platforms now available.

This is vitally important if your audience is in this age group because your promotion has to go where your fans are. 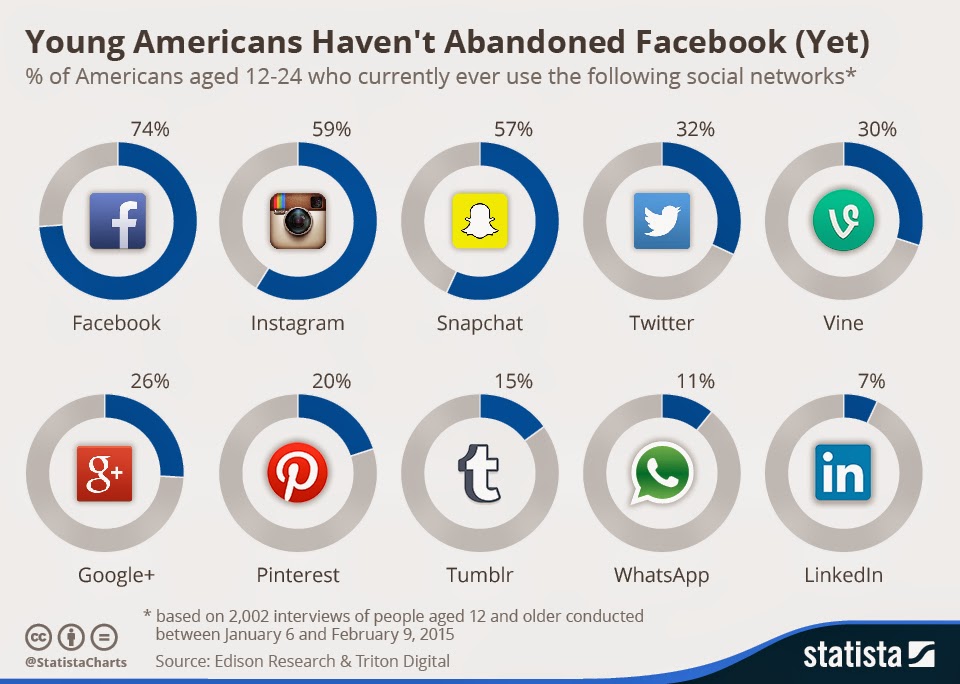 You should follow me on Forbes for some insights on the new music business, Twitter and Facebook for daily news and updates on production and the music business.
Posted by Bobby Owsinski at 7:00 AM No comments:

5 Tips To Get Bloggers To Write About Your Music

It used to be that just one good review in a magazine could sell loads of albums. Even a bad review could be really good for business if it was in a publication like Rolling Stone.

That's all changed since magazine reviews have become pretty irrelevant as the music world has moved online. Now its the music blogs like Pitchfork or Stereogum that can make the difference not so much in sales, but visibility to a new audience.

Sometimes those larger blogs are tough to break through, but the smaller bloggers still provide more of a one on one chance to state your case.

But how do you approach bloggers in the first place? There really is a right and wrong way to do it, so here are 5 tips to get a blogger interested enough in what you're doing to actually post about it.


1. Read the blog for a while to become familiar with the theme and feel. You can turn the blogger off completely by sending something cold without knowing the backstory of the blog.

2. Make some post comments without any overt marketing. Just try to move the conversation along on a few posts. The idea is for the blogger to recognize you as someone who contributes regularly and adds to the conversation.

3. Only after the blogger becomes familiar with you is it safe to reach out about what you’re doing. If you're a regular reader and contributor, the blogger is much more likely to read a press release or take a listen to your music.

4. Sometimes asking a question about your project gets a response. While many bloggers are too busy to answer every email, many go out of their way to accommodate a regular reader and contributor. As a result, it's perfectly okay to follow up after you've sent something to the blogger and there's a good chance he'll answer.

5. Never hard sell, just inform. Hard sell is a turnoff in general. Don't do it. It's okay to state the relevant information, but keep the superlatives like "Best band ever!" out of the equation.

If you want additional tips and tricks about promoting yourself or your music online, check out my Social Media Promotion for Musicians book. You can read excerpts at bobbyowsinski.com.

You should follow me on Forbes for some insights on the new music business, Twitter and Facebook for daily news and updates on production and the music business.
Posted by Bobby Owsinski at 7:00 AM No comments:

After all the hubbub over the iTunes/U2 album giveaway at the end of last summer has died down, it looks like the promotion actually worked after all.

Research company Kantar found that 24% of all iOS music listeners in the US listened to the band's Songs of Innocence album within 5 months of its release.

In fact, Kantor found that even as recently as January, more than twice the number of people listened to U2 than the current hottest artist on the planet, Taylor Swift.

T he study found that nearly every iOS owner who listened to U2 in that time period listened to at least one song from Songs of Innocence.

A lot of skeptics have since blasted the study as being biased towards English speakers or towards U2, but the fact remains that at the end of the day the giveaway did its job to get the album in front of a very large audience, and much of that audience actually listened. That's all an artist can ask from any promotion.

Posted by Bobby Owsinski at 7:00 AM 2 comments:

Google Begins The Breakup Of Google+

There were a lot of big hopes for Google+ as a rival to Facebook when it was launched in 2011, but the social network has never quite lived up to the hype surrounding it.

Even though it boasts 540 million  active users, the adoption rate has leveled off, especially during the last year.

Now it looks like Google is taking the first step in splitting some of the most well-liked features of Google+ off, as the company announced that the Photos feature will become a standalone app and the rest of G+ will go on as Streams, although the Google+ name will remain (at least for now).

Since it's only just been announced, there's no additional information about what might happen to you existing photos on G+.

There's no word on what might happen with Google Hangouts yet, but it's expected that the feature will also find a new home as well.

Hangouts may be the most popular part of G+, especially for artists and bands, but the problem is that since not all of your fanbase is on the network, it limits your reach.

If Google were to split Hangouts off into a separate app, it would be a far more useful tool to artists, bands and musicians, as well as businesses that now rely on Skype.

Here's hoping that Google figures this one out sooner rather than later and has Hangouts follow Photos off on its own.

While music retailers in the US are getting more and more scarce, just the opposite is happening in merry old England. In fact, the number of retail outlets are up 20% from last year!

It's hard to believe that the UK now has 10,391 retailers selling music physical products, as compared to only 4,206 in the US, according to IBISWorld market research. And this from a country that has about a fifth of the population.

Even though there's more places to buy CDs and vinyl, that doesn't mean it translates into increased sales. In fact, physical product sales in the UK were down 5% last year. Just as a comparison, US physical sales were down 14%.

What that seems to indicate is something that many in the industry (including myself) have been saying. If music is more available, then there's more opportunity for an impulse or gift buy.

That doesn't mean it would stem the tide of digital music services, but it could slow it down a bit, just like in the UK.

Nonetheless, if you're in the US or the UK, cherish your local music retailer and do your best to keep him in business. You may regret it someday when he's not around.