5 Ways To Take Your Tribe's Pulse 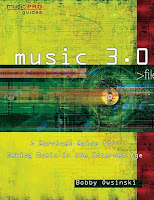 Your core fans, or your "tribe" as uber-marketer Seth Godin calls them, crave your communication. But communication is a two-way street, and the artist must be just as willing to listen to his or her tribe as talk at them. This excerpt from the Music 3.0

"The leader must constantly check the pulse of the tribe to hear what they’re feeling and thinking. This can be helpful in determining just what the tribe likes and dislikes about you and your music. Maybe there’s a direction that you briefly touched upon on your last record that drove the tribe wild, or maybe one that they hated? You might choose to follow your musical instincts instead of listening to tribal feedback, but at least you won’t be surprised by the resulting reaction.

The Music Industry Crisis 30 Years Ago

While many may think that the music industry has only recently begun taking it severely on the the chin, it should be noted that 30 years ago, it was in the midst of a similar crisis. Sales were way down, everyone was panicking, and the industry was pinning their hopes on a shiny metal disc called a "laser video disc" to bring them back to profitability.

Here's a segment from the television show 20/20 from 1980 that sounds so eerily familiar. Take notice to the statement of Joe Smith, then the president of Elektra-Asylum records, a little ways into the video:


"Records, you don't have to buy to hear music. There's sensational equipment out there. There's great FM radio. There's enormous amounts of music out there, without having to buy a record. Counterfeiting, home-taping, and the failure of major artists to deliver records on some kind of regular basis."

Understand that this was before the creation of MTV and the CD, both of which eventually bailed the industry out.
The second half of the video is now being blocked due to a copyright claim from Universal Music. Speculation is that there's something in the report that Universal finds very embarrassing. We'll just have to wait until someone else posts it again.
Regardless, it's well done and interesting to look at everything from a historical perspective.

For those of you who rely on Google Analytics for your site numbers, Google has now added something called “In-Page Analytics.” It’s a neat new function that offers visualization of the page data and really makes it easy to see what's working and what's not.

I think this is going to make a huge impact on measurement and analysis, but I don't think you can appreciate it's power until you watch the following video that explains the new features in detail.

To say that iTunes Ping has been underwhelming is an understatement. The new social feature seems like such a great idea, but also seems like it was released somewhat before it's time. In fact, one of the major problems has been the difficulty for indie bands to set up a profile, which significantly decreases its immediate social impact.

Thankfully Apple has reached the same conclusion and has come out with a PDF that contains a series of best practices, suggestions and guidelines to smooth the process considerably. I must admit that after reading the paper, it seemed like it contained some necessary information but didn't go quite as far as I expected.

It also had a number of interesting items that caught my eye. The following are right out of the PDF with my comments in italics afterwards.

• "URLs should not be included in the About section of your artist profile. This includes official artist
website URLs. URLs can only be posted in the Event feed." You mean you can't post a URL of your website, blog, or Facebook page? Apple again keeps everything tight and controlled, but in this case it's not such a good thing.

• "Video posts will not display in countries where the product is not available for sale, or where videos are not offered through the iTunes Store." In other words, Ping is a social network that's not available world-wide. This would make me think about spending more time on other social networks that would provide more bang for the buck instead of Ping.

• "Only Quicktime and MP4 files." Windows Media is not allowed, although that shouldn't be a surprise to anyone, considering the animosity between Apple and Microsoft.

• "Posts should not include advertisements or links to sites outside of iTunes." The advertisements I agree with, but again, not being able to include links to an artists website, Facebook page or blog is a serious limitation.

It's still too early to known just how effective Ping will be in helping a band increase its visibility and build its fan base. But as it stands now, it seems like there are better places to spend your precious time more effectively.

It's recently been reported that Facebook head Mark Zuckerberg had dinner at Steve Jobs' house. Perhaps Jobs will learn something from the meeting that can make Ping a lot stronger product.

The excellent Hypebot blog asked me to write a guest post to answer a couple of questions that the winners of their songwriting contest had regarding making money without playing live.

While most artist's income comes from touring, there are a number of other possible revenue sources as well, which the article covers.

Everyone knows about crowdsourcing and crowdfunding, but now there's a new way to use the power of the crowd when it comes to music - crowd A&R.  Hard rock and metal label Roadrunner Records has just launched SignMeTo Roadrunner Records, which they call a "fun and functional way for fans and unsigned bands to participate in the music industry's A&R process."

The way it works is that fans sign up as "scouts" and unsigned bands that add profiles and songs are rated by them. The site currently has about 6,000 active band profiles and about 10,000 scouts.

Tagging is a critical element of the process, as it classifies the artists in Roadrunner's genre-specific charts. and applied tags help to drive genre-specific charts (see the chart on the left for an example).  The top-charting artists are the ones that have a chance of getting signed.

This is a brilliant move by Roadrunner for a couple of reasons:

1) Their risk is significantly lowered by signing an artist or band that the "scouts" already like.

2) The artist or band already has built a significant following as a result of the process.

This is a great example of a record label that gets the essence of Music 3.0.

You can sign up as a band or scout here.