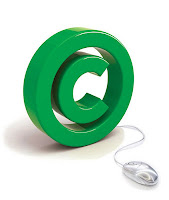 Public Domain Day is January 1st of every year and celebrates the moment when copyrights expire. Films, photos, books and music become "free as the air to common use" if their copyrights are finished, and they then become part of our common culture.

That's because the copyright term is now the lifetime of the author plus 70 years, and every creative work is automatically protected whether the author files the paperwork or not.

The long copyright term wasn't always the norm. When the first copyright law was written, the term lasted 14 years, renewable for another 14 years if the author desired, and this was later extended to a 28 year renewable term. 85% of authors did not renew, so works entered the public domain much faster in those days.

Many copyright scholars feel that the length of the copyright term is now too long, and as a result, creativity and innovation suffers. In fact, some would like to return to the 14 year renewable terms. Of course, if you're an artist, you'd like to retain the income from a popular copyright for as long as possible, then allow your family to claim the benefits after you've passed.

There are lots of good arguments on each side. For some great insight on the subject, take a look at this FAQ from Duke Law School and let me know what you think. 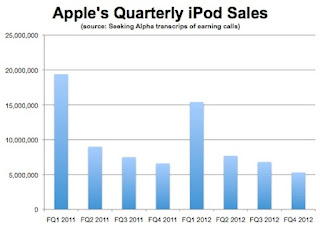 What was once a hot business sector now looks to be going the way of the CD player and cassette deck as sales for MP3 players have plummeted over the last year. Although that part of the electronics business is still a somewhat signifanct revenue stream, it's going down fast.

According to numerous sources, sales in the UK have dropped 22% in the last year alone, and Apple has found their global iPod sales down a full 19%. That figure still meant sales of 5.3 million units in the last quarter, but you can see the trend here.

All this sounds pretty ominous for music, right? Well it turns out that people are still listening to more music than ever, just on a different device. That's right, there are more than 1 billion smart phones in use around the world and that's what people are doing most of their listening with. What's more, consulting firm Strategy Analytics believes that figure will double in the next two years.

So say goodbye to the device that saved the music business, and hello to the one that may save it again.

How many of you haven't made the transition to a smart phone yet?

Check out my Big Picture blog for discussion on common music, engineering and production tips and tricks.
Posted by Bobby Owsinski at 9:30 PM 6 comments:

It's important to be serious about your music career if you expect to get ahead, but sometimes it's possible to actually be too serious about things. Music should be fun both in the creation and listening, and if it becomes too much of a job for an artist it translates to the audience, who can immediately pick up the vibe. Here's a video by CD Baby founder and former CEO Derek Sivers about what he's found to be a big mistake that many artists make.

Here we are at 2013. If you're an artist or in a band, here are 5 social media marketing resolutions for the year that are the basis of the Music 3.0 strategy.

1. I will update my (our) website and make it the center of my online universe. Your website is important because it's the only thing you have total control over and you can rely on 100 percent. Facebook, Tumblr and other social networks provide far less control and can change their terms of service at any time, but your website is always securely yours.

2. I will release music regularly. Instead of releasing an album, release a song every month to six weeks instead. Each release is a separate event that you can promote, therefore you have multiple promotional opportunities. An album gives you only one.

3. I will create more videos. Most people discover new music on YouTube than any other place other than radio. Make a video for your songs as soon as you can. Don't wait to make proper videos, which take a lot of time. Just put the lyrics up over the music until a proper video is available. You see lyric-only videos all over YouTube that have millions of views, and that can happen to you too.

4. I will develop a mailing list and send a newsletter at least once every 90 days. Other than your website, your mailing list is the next most important part of your online presence. It's the best way to personally reach out to your fans.

5. I will post and tweet more regularly. Being regular and consistent is important, but provide more than constant sales pitches. Offer behind the scenes information, trivia, or links to other interesting info around the net. Keep your fans entertained.

This is a quick outline of an artist's modern marketing strategy, and obviously there are a number of additional points and a lot more to talk about. That's what well be doing on the Music 3.0 blog every day in 2013.

I don't normally cross-post between my Music 3.0 music industry blog and Big Picture production blog, but the topics below apply to both. As 2012 draws to a close, now is the time to take a look at what might be ahead in 2013. Here are 10 story lines to look out for in the year ahead, in no particular order of importance. In some cases we can clearly see what might happen, while in others it's still an open question.

1. A new trend in music. In case you haven't noticed, we in living in the middle of two musical trends with EDM going mainstream and the folk-roots movement led by Mumford and Sons breaking big. Is 2013 going to be more of the same as both trends peak, or will there be something completely new that captures our attention?

2. Streaming music takes over. 2012 was a year for pushing the streaming music ball up the hill and so many people were converted. When Apple announces their plans for streaming in 2013, the ball will begin rolling down the other side of the mountain and downloads will join the ranks of the CD - still in use, but no longer the music distribution mainstay.

3. Guitar Center's decline. The king of the music equipment retailers is in trouble, with falling sales and reportedly a huge balloon payment due. Don't be surprised if you see some changes in the marketplace, with a smaller more nimble GC facing some real competition. All in all, good for the business.

4. The Big 3 provide a boost to DIY. With the Universal Music takeover of EMI now complete, we've moved to a 3 major label world. Although you still need a major to become an international superstar, will this be the year that mold is broken and we see a true DIY breakout?

5. Hi-res music comes to the forefront. Bandwidth and storage are now cheap, and in a world where we're streaming hi-res video with monetary impunity, why should we still be listening to the lowly MP3? With Apple now moving to hi-res with their Mastered for iTunes program, Neil Young's Pono (if it gets off the ground), and sites like HD Tracks, is it possible that the mass market can finally move beyond CD quality?

6. Avid's decline. Talk about a sinking ship, Avid's stock has fallen like a rock (although it's been up a little in recent days), many of their best people have jumped ship, and Pro Tools looks vulnerable for the first time in years. It will still take a lot to get the entrenched pro market to change, but the upcoming NAMM show may hold a few surprises.

7. The tablet takes control. There's no doubt that the tablet computer has taken the world by storm even to the extent that PC sales are way down. While 2012 saw a few new serious audio creation programs come to the platform, will 2013 be the year where we cross the threshold into doing serious projects on it?

8. Diminished trade show importance. With the Internet, we no longer have to go to a trade show to see what's new. With so many of the industry trade shows faltering to the point where some of the biggest manufacturers don't attend, look to see the trend continue toward irrelevance.

9. The increased importance of the Cloud. So much of our every day world now takes place in the cloud that it's almost become transparent to us. Will music creation and storage switch completely to the cloud in order to increase security and eliminate leaks? Will more online collaboration make studios even less relevant than they currently are?

10. Can the album be saved? We now live in a singles world again, and although the album hasn't totally fallen by the wayside, it's becoming less and less important all the time. Every year a new electronic form of the album enters the marketplace, but none have yet to catch on. Will 2013 be the year that a new format wins our hearts and our pocketbooks?

There are many more than these 10 issues, but I thought that these were particularly interesting to watch for, at least in the beginning of the year. As always, it will be fun to look back at this time next year to see how each story developed.

Have a very happy New Year, and may you find it profitable and fulfilling. And once again, thanks for reading!