Pandora And The CD

Regardless of the trends towards online digital music, CDs are still important. Sure, you may sell a few, but it's the hidden advantages of the format that everyone overlooks.

Take Pandora for example. I came across the following section on their submission FAQ.


To submit music to Pandora, you'll need these items:
1) a CD of your music
2) a unique UPC code for that CD*
3) this CD to be available through Amazon as a physical CD (and not just as MP3s)**
4) the legal rights to your music
5) a standard free Pandora account, based on a valid email address, that will be associated with this submission
6) MP3 files for two of the songs from your CD
Once you have all of these items ready to go, you can submit your music to Pandora for consideration here: http://submitmusic.pandora.com/.
Take notice that the only way to get on their playlist is to have a physical CD for sale.

It's the same thing if you want your music reviewed. It doesn't matter if it's on a blog or traditional media, you're not legit until you have a physical product that you can send to the reviewer. I saw this exact situation for myself a couple of years ago when I was producing the first SNEW album

. I was all for releasing it digitally but the band insisted on a CD and they were right. Even though the music was released online months before the CD was available, they couldn't get a single reviewer interested until the physical CD was released. As soon as that shiny plastic disc was available, they were perceived as a viable entity and received more than 100 reviews (almost all of them great, by the way). For their recently released CD, "We Do What We Want,

" there was no question that it would be available on as many formats as possible, and once again we've been rewarded with at least as many reviews, band interviews, and a ton of airplay. I'm convinced that it wouldn't have had nearly the success without the physical product.

It used to be that pressing CDs was a pain since you had to not only pay for them up front, but keep them in inventory and distribute them as well, but even this isn't much of a problem these days. Services like Kunaki not only allow you to press CDs on demand, but they'll drop ship them as well. They look like a million bucks (as long as your artwork looks that way) so that old worry at the "CD-R look" doesn't apply.

So while there's no doubt that the music world is more digital than ever, the CD is still a useful distribution tool. Ignore it at your own peril.

Yesterday we looked at the 15 "do's" of sending out an email blast. Today we'll look at the 15 "don'ts," once again from clickz.com.

Here are 15 things you should never do (or at least don't admit to them):

This is some excellent advice and well worth following. Once again, you can find the full text to the post here.

There's no doubt that email is an important part of an artist's social strategy, but sometimes a poorly thought-out mail can be worse than none at all. The following comes from clickz.com, and are worth checking out before you hit the send button on your next blast.

Here are 15 moves every e-mail marketer should include:

If you keep the above in mind, you're email blast will always have a purpose and get the results you're looking for.


Once again, you can find the full text to the post here.

Email Is Not Dead 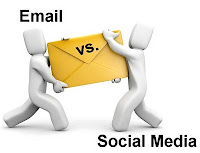 It appears that reports of email's demise are untrue, according to a recent survey of 2,200 adults in the US and UK by Harris Interactive. Despite the rise of social networking, we're still addicted to it and we're not letting go. Here's what the survey found:

The data shows one of the best reasons to maintain that email list. People do check their mail and it's still important to them. It's up to you to send it.

This is a repost of one of the earliest Music 3.0 blog posts in honor of Labor Day.

Here's a great post from the Networlding blog called The 3 Pillars of Effective Social Networking. It's not referring to digital social networking however, but to real physical social contact - as in one-on-one personal interaction.


This blog violates a number of digital social marketing principles though, as all I know is that the author's name is Melissa, since there's no background about her anywhere that I could find. It seems that she assumes that you know who she is already, which can be a big mistake.

Good post though, about the 3 R's (recognition, referrals and revenue) and the 3 C's of making a referral:

"People love recognition, referrals, and revenue.
Make a referral, but hope you get back:
1. Credit (for the referral, especially when other people use your contact for their benefit, they should give you public credit for the introduction)

2. Contacts (that can help you and your business)

3. Compensation (If and when appropriate)"

Great advice that applies online or good old-fashioned person to person.
-----------------------------------
Follow me on Twitter for daily news and updates on production and the music business.
Check out my Big Picture blog for discussion on common music, engineering and production tips and tricks.
Posted by Bobby Owsinski at 9:22 PM No comments: