5 Reasons For The Downfall Of MySpace 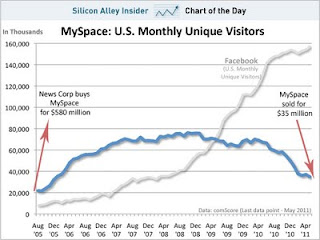 It's no secret that MySpace has been on the decline ever since it was purchased by NewsCorp in 2005, and now that it's been sold for about 6% of its purchase price, it's probably a good time to look back on the reasons why it's in the dumper.

1. It's all in the interface. MySpace has an interface that worked great for the year 2000, was looking a bit long in the tooth by 2005, and feels ancient in 2011. The fact that something newer and friendlier never came to pass has been one of the factors that caused the user exodus to other platforms. For artists and bands, that meant BandCamp, Nimbit, etc (see yesterday's post on artist helper services).

2. The rise of Facebook. When NewsCorp bought MySpace, Facebook was still a relatively small social network confined to only colleges. Soon afterwards it was opened up and social networking really took off, thanks to it's clean modern interface and interactive features like gaming. MySpace just couldn't compete.

4. The culture of NewsCorp. Let's face it, large corporations aren't particularly noted for their innovation. Small companies headed by entrepreneurs push technology forward, but Big Inc. speed is that of a glacier. MySpace needed to get better fast, but that never could happen in a big public company culture of Newscorp or any other, for that matter. This marriage was doomed from the start.

5. The march of technology. An online tech company seems to have a somewhat short lifespan almost by nature. Already we're beginning to see some user attrition on Facebook, which looked like a juggernaut that would only keep increasing its user base. It wasn't that long ago that Google was unbeatable, but several of their ventures have ground to a halt and the perception is that they're turning into the new "evil empire." No matter how big, it's not beyond the realm of reason that an online company can either be gone overnight or it's business model changed completely. Why should we be so surprised it happened to MySpace?

In the end, MySpace could have lead the revolution. Instead, it's just a speed bump in the social networking road. Can it be reinvented? Only time will tell.

These days most artists or bands are in DIY mode ("do it yourself") in order to develop an audience, promote themselves and further their careers. Of course, there are a host of services that will gladly help you for a fee, and more seem to be coming online all the time. Some of these services have an advantage or two over the others, but most offer more or less the same services. If you're not happy with the service you're using now, it's pretty easy to find another that might better meet your needs.

Here's a list of the top 30 services, courtesy of Digital Music News:

Check out my Big Picture blog for daily discussion of music, recording, and production tips and tricks.
Posted by Bobby Owsinski at 9:36 PM No comments:

The Evolution Of Email

Regardless of the general wisdom around the net these days, email is still a major way for us to communicate, especially for business. It's true that texting is more popular with the "natural" generation (those teens and younger who've never known anything else), and direct messaging from Facebook and Twitter is a growing trend, but if you're serious about getting a message of any kind across, your world still revolves around email.

Still we've come to think of email as a stunted technology that hasn't changed much since it was invented in the 60's. That's far from true, as you'll see in the following chart. Email is a living and breathing piece of tech that continues to grow until this day.

Check out my Big Picture blog for daily discussion of music, recording, and production tips and tricks.
Posted by Bobby Owsinski at 9:40 PM No comments: 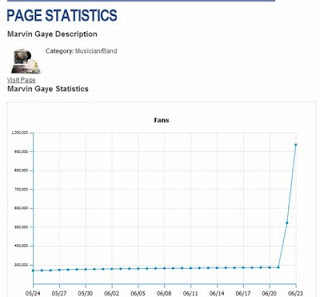 If you ever had any doubts about the wisdom of promoting on Facebook, look no further than r&b singer Marvin Gaye. Even though he's been dead for almost 30 years, MG’s become a viral sensation right now. The reason?  Universal Motown, Marvin Gaye’s record label (which was pretty much gutted by parent UMG recently - but that's another story), recently launched a successful Facebook campaign to celebrate the 40th anniversary of his What’s Going On

” all over the world.

Fans have responded by loading photos, videos and even editorials, but more important, the campaign drew more fans that I think even Motown thought could happen. Gaye began with fewer than 300,000 fans at the beginning of the week but had increased to more than 940,000 by today. Gaye’s name even became a trending topic on Twitter.

Granted, MG has a legion of built-in fans, but the fact was that they were mobilized and made aware of the new release thanks to the social media campaign. The lesson? Don't take social media promotion lightly. It's been shown to work and work well time and time again.

Check out my Big Picture blog for daily discussion of music, recording, and production tips and tricks.
Posted by Bobby Owsinski at 7:38 PM No comments: 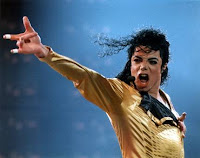 Superstars never really die, they're estates just get richer. That's certainly the case with Michael Jackson, who was on the edge of bankruptcy at the time of his death. Now two years later his estate has collected a huge amount of income, and is poised to make still more in the coming years.

Billboard Magazine reported in June 2010 that the Jackson estate had generated over a $1 billion in the year since his death. The revenue was generated by a combination of music sales ($429 million), film/TV revenue ($392 million), music publishing ($130 million), licensing ($35 million) and a $31 million recording contract. That was a year ago, so the figures are even gaudier today. How did this happen? Consider this:
Considering that there will soon be two Cirque du Soleil shows (one permanently set in Las Vegas and the other travelling), it looks like Michael Jackson will continue to be a hot property for some years to come. For more interesting figures on MJ's sales, check out this MTV story.

Check out my Big Picture blog for daily discussion of music, recording, and production tips and tricks.
Posted by Bobby Owsinski at 9:32 PM 1 comment: