How Long Should Your Teaser Video Be?

Many artists and bands will post a teaser video of their album before it's released, or as a brief sampler afterwards. The problem is that there's several schools of thought on how long the teaser should be.

One school has it that shortest is best, since YouTube attention span is around 8 seconds. The second school says that you should make it as long as necessary to get the point across, even up to several minutes long.

It turns out that neither may be right. According to a study done by Think With Google, good old fashioned 30 second ads performed far better than either 15 or 60 second ones when it came to people viewing it all the way through. This allowed the viewer to get more detail about the product without the dreaded viewer fatigue.

This contradicts what happens on television, where 15 second ads are up to 75% more effective (and cheaper) than their longer counterparts. No surprise since online advertising has proven to be substantially different because of its random access nature.

The bottom line is that 30 seconds is a sweet spot in that it's neither too long nor too short, giving you enough time to get the point across while the viewer doesn't feel like she has to sit through too much information.

Facebook Live looks to be a boon to artists and bands everywhere who want to reach their Facebook fans. That said, there are some best practices in using the platform, according to Facebook's Media Blog. Here's what they suggest:

1. Alert friends and followers in advance about plans to broadcast live, in order to build up anticipation.

2. Ensure that you have a fast enough connection to broadcast live video, preferably WiFi or 4G. Be aware that the “Go Live” button will be grayed out if the signal is not strong enough to support Facebook Live.

4. Ask friends and followers to sign up for notifications so that they are aware of your Facebook Live offerings.

5. Respond to comments by saying hello and mentioning the names of users who comment.

6. Stay live for longer time periods: Facebook recommends at least 10 minutes, and the feature supports broadcasts up to 90 minutes.

There are plenty of live video platforms out there, and you may be successfully using some of them already. That's fine if you're sure you're reaching your fans, but keep in the mind that Facebook has more users outside the United States than in. If you want to reach those fans, consider using Facebook Live.

Tidal Subscribers Sue Kanye West For Posting On Other Services

Here's an interesting twist in the Kanye West/Tidal story. He's getting sued by Tidal subscribers who claimed they were duped into paying for the service.

It all stems from when the performer released his latest album The Life of Pablo exclusively on Tidal. At the time, West claimed that the album would never appear on another streaming services, and as a result, some two million people flocked to Tidal to pay at least $9.99 a month to have a listen.

Alas, that exclusivity was to be short lived as TLOP is now available on both Apple Music and Spotify - for free.

That's part of the reason why West has been named in a class action suit against him. Perhaps because that might be a flimsy case to present, the plaintiff's attorneys are leaning more heavily on a privacy issue instead.

"Mr. West's promise of exclusivity also had a grave impact on consumer privacy," the lawsuit states, mostly because user credit card information, music preferences and other personal information were collected.

The lawsuit contends the value of new subscribers and their personal information could be as much as $84 million for Tidal.

The album was reportedly streamed some 250 million times within 10 days of its release.

This will be an interesting one to watch.

If you've been following this blog for any length of time, you know that I've been saying all along to watch out for Amazon Prime Music as the next big disrupter in the streaming music space.

Why? Prime Music is part of the popular Amazon Prime subscription service that already has a reported 75 million subscribers (although Amazon isn't saying just how many). Amazon is also dabbling in its own record label, and is generally getting into the mainstream music distribution waters one toe at a time.

Well, maybe two toes, as the company recently dropped a few new nuggets of what might come next.

First of all, T-Mobile must added Amazon Music to its data-free music streaming program called Music Freedom. This is the first instance of Prime Music being available to off-the-platform users.

What might be more an indicator of the future is the fact that Amazon just made it's Prime Video service available as a stand-alone product for $9 a month. For $11 a month you could also buy the full Amazon Prime membership complete with Amazon Prime Music and 2 day shipping (which is more expensive than just paying the $99 a year fee for the same thing).

Although this last move has little to do directly with Prime Music, it's another baby step in the direction that we inevitably know Amazon will take. Don't be surprised if there's a big announcement about a free-standing Prime Music service in the next few months. 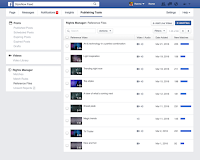 Content creators have been complaining for months that many of their YouTube videos have been showing up on Facebook posted by someone else - an action called "freebooting."

In an effort to alleviate the situation, Facebook has now officially launched its version of YouTube’s Content ID called Rights Manager.

This is an admin tool for Facebook Pages that lets them upload video clips, then monitors Facebook news feeds for copies of these videos that might be later illegally posted to Facebook. It can then either automatically report them as violations to be deleted or notify the original publisher.

Rights Manager allows copyright owners to set up whitelists of Pages that are allowed to distribute their videos, and upload unpublished videos they don’t want anyone else using even if they haven’t posted them themselves.

It will also show what Page posted a video, how many views it has gotten, and sort alerts about freebooting by these parameters, too.

Live videos can be monitored as well, which is designed to prevent people from rebroadcasting pay-per-view TV content like boxing matches, which has become a huge issue that has put Periscope in the television industry's crosshairs.

Interestingly, there's been no discussion about monetizing Facebook videos yet, although it seems like only a matter of time now that Rights Manager is in place.


Any purchases made through our Amazon links help support this blog at no cost to you (just click here).