One of the things that the vast majority of songwriters are looking for is more copyright protection, or at the very least, a revision of what's already on the books. Chapman University law professor Tom Bell has quite a different viewpoint in that he believes that dialing back copyright law will actually spur greater creativity.

Bell has a new book out called Intellectual Privilege: Copyright, Common Law and the Common Good, and in it he states that the existing copyright law contradicts our constitutional right of free expression. His solution is to use common law instead, which means that we'd use the established laws that cover ordinary property that already exist and work well in courts instead. That would encourage artists to create works that are considered a legal gray area now, like mashups, tributes and parodies.

Have a listen to what he has to say, as he makes a very persuasive argument. 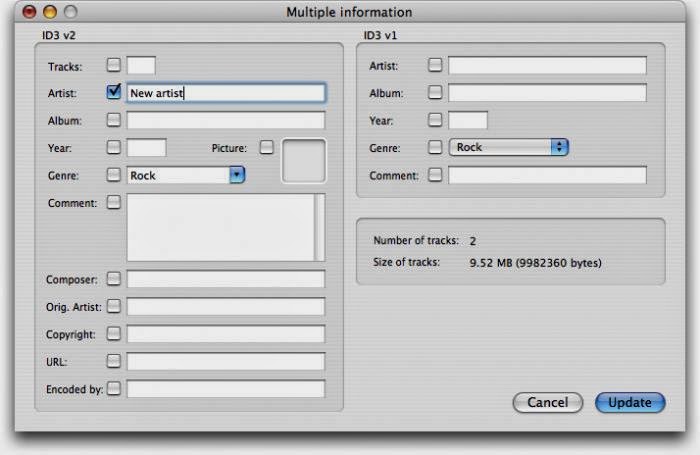 The other day I wrote a post on why creating the proper metadata for a song or album is so important. A number of readers wrote in asking for suggestions for some metadata editors, since many DAWs don't provide extensive access to many of the metatags that are needed. Here's a list of 10.

iTunes - There's a nice metadata editor right within the app.

Metadatics - This is Mac only and costs $9, but it also covers a wide range of file formats.

Tuneup - This is a Windows and Mac editor that has both a free and premium version.

ID3 Editor - A simple Mac editor that provides most of the metatag needed. Free.

Musicbrains Picard - This is a pretty geeky editor that cross platform, but it's very extensive if you get down inside it. And it's free.

UDTE-ID3 - Another PC only editor that supports a wide range of file formats.

WaveAgent - A very cool Wave file editor for both PC and Mac.

If none of these 10 seems to fit your needs, there are plenty of other audio metadata editors available. Just do a Google search and find the one that suits you best.

The Reality Of DIY Sales

The RIAA just released its Labels At Work: The Music Business In The Digital Age report that has some interesting stats that indirectly point a spotlight on DIY sales. Of course, this is from an industry trade group composed of the 3 major labels, so it's going to be slanted, so take this for what it's worth. That said, the stats are telling nonetheless.

First of all, the report states that the major labels spend 16% of their revenue on A&R, which in turn means they call themselves the "Venture Capitalists of Music." I'm not crazy about the term and what it implies, but when it comes to finding new music, it's certainly true in that it's their major investment.

Other interesting stats:
The reality is that most musicians are pretty good at making music, and terrible at marketing it. Remember that we're in the music "business" and you can't have one without the other.

If you're interested in learning what it takes to sell you music and get ahead in the music industry, consider enrolling in my Music Prosperity Breakthrough coaching course. It's a small investment for what you could receive in return.

Basic Metadata Every Song Should Have

We're increasingly living in a world built around metadata, which is the descriptive information about the primary data like a song file. Metadata is often overlooked by songwriters, artists and bands because it takes time and some additional research that many just don't want to put it. Meta data is becoming more and more important though, as we move into the age of streaming music.

Why is it important? The metadata of a song contains all the info about who should get paid, including songwriters, publishing company, record label, and performing rights organization. That alone should be enough reason to fill in the blanks. But another big reason is that because song placement on film and television is so important to an artist's income these days, metadata has become vital to the very people who decide what makes the cut - music supervisors.

In order to cover all your metadata needs, here's what to include with every song, especially if you're trying for a sync placement:

1. Name of artist
2. Name of songwriter
3. Song title
5. Album title
6. Label
7. Publisher
8. Year the song was released
9. The track number of the song on the album
10. The musical genre that the song falls into
11. Producer
12. Contact (either yours or management)
13. Performing rights organization you're affiliated with (ASCAP, BMI, SESAC)
14. Mood of the song
15. BPM of the song

It seems like a lot of info, but if you want a placement, it's all vital in rising above the competition.

Sony Threatens To Pull Out Of ASCAP And BMI

In what may be a glance at the music publishing world to come, Sony/ATV Music Publishing has threatened to end its relationship with music licensing agencies ASCAP and BMI if the changes it wants aren't implemented. And it looks like Universal Music Publishing could be lining up to do the same thing.

The issue primarily stems from the payments received from streaming royalties, which most publishers think is too little, especially when compared to downloads. Then there's the fact that the performing rights organizations (PROs) have always been nebulous how their payouts are determined. Writers and publishers alike have been frustrated for years over the disparity between royalties payments between ASCAP and BMI on the same song, where one will be higher than the other on one statement, than switch on the next.

Given the fact that we live in an age where song use tracking and royalty accounting is so much easier than in the past, it would seem that the PROs usefulness might now be diminished. Where for most of the 20th Century they were a total necessity for the publishing business, today that's becoming less true, since every play can be digitally tracked.

Sony/ATV has a catalog of over 2 million songs, including huge earners from The Beatles, Taylor Swift and Lady Gaga. Pulling out of ASCAP and BMI would be a significant blow to those organizations, and probably just the beginning of the snowball rolling downhill. It wouldn't be long before the other large music publishers followed suit.

It's probably inevitable that this will happen eventually. What's for sure is that we're about to witness both big changes in the industry and some history in the making right before our eyes.