YouTube's Music Key Ups The Ante For Other Streaming Services

Today YouTube finally unveiled its long awaited Music Key subscription service and at least at first glance, other streaming music services should take notice. It offers a number of features that other services might not be able to easily offer, making it more difficult for a company to be able to differentiate itself in an increasingly crowded space.

While it was common information that for a $10 per month fee, Music Key would allow the user ad-free and offline playback as well as the ability to listen in the background, what we didn’t know was that you’d also get access to the entire Google Play catalog too. This includes a large selection of not only audio, but video as well. Plus there’s also an abundance of playlists and the ability to listen and watch over compatible services like Sonos and Chromecast.

So why should the other services take more than a casual notice to the launch? First of all, its about video as much as audio. If there’s an enticement to get a heavy YouTube user to pay 10 bucks its getting rid of the pre-roll or popup banner ads when they watch a video. YouTube is already the most widely used service for consuming music online, and yes, you can still do that for free, but everyone hates the ads. I bet a lot of people will buy in for this reason alone.

On the other hand, many music lovers access YouTube to find primarily their favorite song. They don’t necessarily care about the video attached, and many times the video only shows a static picture anyway. While the main attraction for users may be the ad-free environment at first, that can quickly change once they’re exposed to the other features. You can keep a customer with one killer feature, but for every additional feature that he comes to rely on, it becomes increasingly more difficult to pry that user away to another service. Read more on Forbes.
----------------------------------
Help support this blog. Any purchases made through our Amazon links help support this website with no cost to you.

An Artist's Look At Music Delivery Format Pros And Cons

In the recent past, there have always been multiple containers (a container is the way the music is packaged for distribution) of music that an artist had available for sale. First there were vinyl singles and vinyl albums, then vinyl albums and cassettes, then CDs and cassettes, then digital downloads and CDs, and now we can add streaming digital music to the list. With the recent resurgence of vinyl, an artist has four container options for distribution of his or her work. Here's an excerpt from my Music 4.0: A Survival Guide For Making Music In The Internet Age that takes a look at the pros and cons of each. 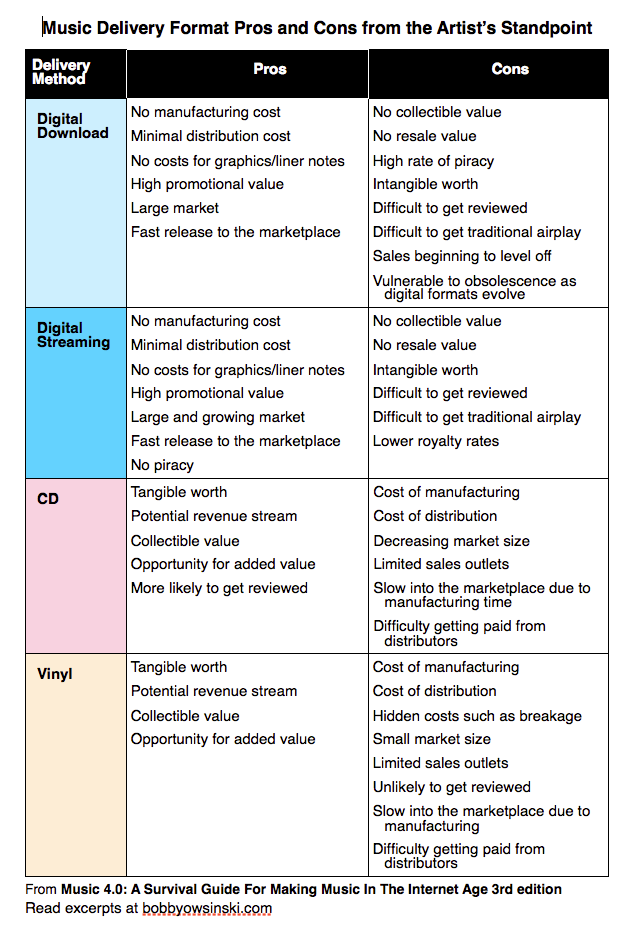 As you can see from the chart above, each of the current delivery methods has an assortment of pros and cons. This is not to say that one container is better than another in our current music world, but it helps to be aware of the benefits and disadvantages of each.

You can read additional excerpt from Music 4.0 and my other books on the excerpts section of bobbyowsinski.com.

Many high profile artists are railing against the royalty payments provided by Spotify, but it's paying out more and more money every day. In fact, the streaming service has now overtaken iTunes as far as royalty revenue in Europe, according to Kobalt, a company that helps collect music royalties on behalf of artists.

Kobalt has a number of big artists in its stable, including Maroon 5, Lenny Kravit, Dave Grohl, Max Martin, Bob Dylan and many more. The company reports that revenue from Spotify streams were 13% higher than from iTunes last quarter, but it only collects for its artist in Europe.

What's interesting is how fast this has flipped. It was only a year ago that Kobalt found iTunes earnings were 32% higher than Spotify.

People can deny that streaming isn't gaining traction or isn't paying, but the facts say that's definitely not true.

The problem is that many artists aren't seeing these new revenues mostly because of the deals they've struck with their record labels. Labels have always been good at siphoning off money from artist royalties, and even though we're now in the digital age, it seems just as difficult as ever to track.

That said, streaming is coming on strong, and soon it will mean more money for all involved. How much more remains to be seen.

Streaming Service Grooveshark Gets Into Events

Grooveshark has always been one of the more interesting music streaming services in that it's always been a tiny outsider trying to stay competitive with the deep pockets of the industry. Starting as an alternative download service to iTunes in 2007, the company couldn't get much traction from the major record labels as far as licensing agreements. This lead to the service morphing into a more radio-like model that quickly ran afoul of a number of record labels, since licensing agreements were still not in place.

The company has since lost lawsuits filed by the major labels and even had its Facebook compatibility features pulled from its website and its Android app removed by Google.

None of this has stopped Grooveshark from trying new things though, and the latest is getting into events with Grooveshark Presents, a crowdsourced concert initiative that attempts to use the company's streaming data to help artists and promoters to better plan events.

Grooveshark.com currently calls itself a "Virtual DJ" allowing the user to broadcast a playlist, which is a great idea, except for the fact that artists and labels claim they're not being paid.

While Grooveshark is appealing its loses in court, it continues to try to stay relevant. The fact that it has 30 million monthly users is pretty impressive, but it still remains to be seen whether this new niche will ultimately be enough to keep the company alive over the long term in the face of continuing industry pressure.

The New Bandcamp Subscription Feature And Why It Won't Work

Indie music aggregator Bandcamp recently launched a new feature that enables fans to subscribe to its artists for a fixed amount per year (like the $32 that the UK band Candy or artist Steve Lawson are charging). During that time, the fan gets access to all the material that artist or band creates. The fan also has the option of paying more than the subscription amount if they so desire.

While this might sound like a great idea and a good way for fans to support an artist or band, it's probably a feature that will benefit Bandcamp much more than any artist on the service. Here's why:

1. We're living in a different world than even 3 years ago. Fans are more interested in a song by an artist than the artist themselves in most cases. They can get the songs for free on YouTube or for a lot less money than subscribing if they already pay for a streaming service.

2. Most artists over-promise when it comes to future releases, but it's really difficult to turn out a lot of quality product over the course of a year and on a regular schedule. If the releases don't come as promises or they aren't as good as expected, the subscriber doesn't remain engaged. If there are fewer subscribers than anticipated (which is always the case), regular creative output becomes even more difficult for the artist.

3. Most artists concentrate on their subscribers or the non-subscriber fans, but not both. This leads to fan attrition rather than increasing the fan base.

4. You're competing against yourself if you expect people to buy your product on Amazon, iTunes, or  purchase a CD or vinyl. If they sign up for decreased subscription rate, that's a lot less money that you can get from someone who's already a fan and might be more willing to purchase on a whim.

That's not to say that subscription can't work in some cases (a jam band like Phish that's been around for along time and has a big catalog of recorded concerts for instance), but it's not a model that most artists will find useful, especially if you don't already have a large and well-established fanbase. The bottom line, Bandcamp may be trying to sell you on this feature, but it's not all it's cracked up to be.