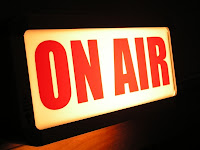 Tony Monte is the founder and president of New Music Director, a multi-media company that provides interviews and exclusive performances from a variety of recording artists for web broadcasts, but prior to that he worked promotion for Capitol Records. Tony recently appeared on Rick Goetz's excellent MusicCoaching.com and had some very interesting comments on how radio is now relying on social media to determine airplay. Be sure to read the entire interview at musiccoaching.com.
--------------------------

"It appears that because of the way the music industry and radio have evolved, it has become much more difficult than ever to secure a slot on radio. The reason I say that is because radio programmers, heads of programming – whether they be regional, national or consultants – are being looked at under the microscope by the people that oversee each of those different areas. They have to stand behind the decisions they make in supporting a record to put on the air. If a record doesn’t’ connect almost immediately, it doesn’t stay on the air. It has a shorter life span, unless they can see something happening. If you get to the point as an artist of even being on the air, having a great song is just a part of it. I don’t know if it’s as meaningful as it has been in the past, because they want to see other things.

A recent example is, I wound up sitting with some programmers with a new artist and playing the song. While the song was playing, they were just as interested in looking the artist up via their Facebook page, their Twitter page and their other online outlets as they were in the song itself. People want to know now, even with a brand new artist, what’s going on. And it goes back to what I was saying earlier:  If you can create a story and build a foundation locally, it gives you a platform to move from. One of the advantages of doing things locally is that the clock doesn’t necessarily run out. When you’re at a major corporation – a multi-national music company – there are a number of artists that are scheduled. That’s just fact and reality. And you have a window during which to connect with an audience and the general public. If the company doesn’t see those signs, they’re onto the next band or artist. I don’t mean that in a negative way. It’s just that the reality of the process."

Read the entire interview at musiccoaching.com.

So You Want A Label Contract

Here's a great article recently posted by Apryl Peredo on Music Think Tank that's worth reading. I don't agree with everything in the article because there are exceptions, but it's pretty much on the money for the most part.

Artist's and bands that have just recently formed sometimes get the feeling that they're the next best things to sliced bread, and maybe they are, but the "recently formed" can be a stop sign for many many labels. Apryl talked to a number of label execs and here's what she found.
-------------------------


"So, what do label reps have to say when it comes to considering a band/musician? Here are some of their informational nuggets:
1. We don’t sign “newly formed” bands.

Labels do not want to sign a band that just formed last week, last month, or even six months ago. Labels want to know that the band has been together long enough to have developed a good working relationship. The members can handle internal problems on their own. They have learned each others’ quirks and know how to write music together. Time together gives the label some intangible evidence that the band isn’t going to break up right after signing and receiving a possible advance.
Check a band’s bio: you will usually see that the band was together for 5-7 years prior to being signed. The few times a band is signed after only 1-2 years together, most
times the members were “together” longer than that as they were school or university class mates.

2. We don’t sign undeveloped bands.
Ah, the innocence of a newly formed band! “We just need to get signed and then we can start making great music!” or “When we get signed, then we can play some cool gigs/live shows.”
If you do not already have great (“greatness” evaluation is subjective, of course) music written, you won’t get signed. Labels no longer have a huge development budget, and cannot afford to sign the garage band they heard practicing last Saturday, with the idea that they can be developed after signing. To get signed, you need to have at least 10 well-written original songs, already in your band’s catalog. You need to have gotten your “live performance chops” from performing at every bar, festival, event, and house party that will let you play. The label hasn’t the time, desire, or money to sign you and then wait for you to learn.

3. We don’t sign unknown bands.
What counts as “known” depends a bit on size of the label. A major label may want to see that your band can draw at least 200 people to your shows, on a regular basis. They may want to see that you have self-sold 10,000 units in the past 18 months. Perhaps they want to see that you were able to get enough fan votes to get yourself on a major “indie artist” stage at SXSW. Possibly they want to see that your streaming music sites are getting 500 plays a week.
A sub-label or independent label may feel that you are “known” if you can regularly draw 40 people to your shows, self-sell 500 units in a year, you got good write-ups the past 3 years running for your excellent performances at the state fair, and you average 15 new fans each week on your reverbnation profile.

4. (a) We don’t sign people/bands we meet at parties.
One executive stated, “When I’m at a social function, I’m at a social function. Don’t come up to me and tell me you’re in a band and try to give me your demo. I might take it to be polite, but your band’s name will be noted, and the demo will go in the trash can. Submit your demo the right way.”

4. (b) We don’t sign based on oral “favors.”
Ah, it must have been great to live in the 1960s-1985! Pretty girl with a certain skill – recording contract!! Sorry, no more – there is no unlimited budget for signing and maintaining artists. Labels have to sign based on music quality or the perceived saleability of that music, not on “favors.”
Actually, I was rather surprised that this was even mentioned, but girls still try to gain meetings, demo reviews, and signings based on sexual favors. The two reps who brought this topic up said that 85% of the “executives” who accept such a favor are not even in a position to make a signing choice."
Remember that it takes time for any artist to get their act together, and in most circumstances, labels respect an artist that takes the time. Putting in your 10,000 hours really does make a difference. Read the entire article here.

Check out my Big Picture blog for daily discussion of music, recording, and production tips and tricks.
Posted by Bobby Owsinski at 5:34 AM No comments:

Here's another great infographic from Mashable, this one on the social media use of small businesses. Though not directly related to the music business, artists and bands and almost every company except the major labels are "small businesses," which is why I thought the graphic was helpful.

I don't think there's much new here, but it does verify pretty much what everyone thought.

The Music Industry Is Bigger Than You Think 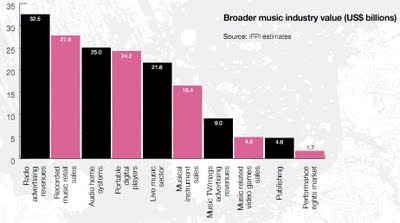 Whenever someone mentions the phrase "the music industry" we immediately think of record labels and music sales, be they via a digital file, CD, vinyl record, cassette or some other method where we listen to songs. The business is a lot bigger than that, especially if we look at all the different categories.

As you can see, it's a huge industry worth $168 billion. Sure, there are a lot of facets to it, but it just goes to show that there are also a lot of consumers out there who are still willing to part with their cash in exchange for something to listen to, play or enjoy music with. Don't believe what you read about the music business dying. The numbers don't lie.

Here's a look at what the music business looked like on September 11, 2001, thanks to Digital Music News. We've come a long way since then.