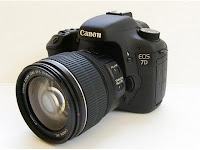 Photographer Scott Bourne wants to increase the number of Twitter followers he has so he's come up with a pretty good idea. Scott is holding a contest to win a Canon 5D mk II and a Canon 7D SLR camera. All he wants you to do is follow him on Twitter, and send out a single tweet regarding the contest.

Scott is asking his contest entrants to tweet only once in order to observe Twitter etiquette and avoid spam, and he's very careful to spell that out on his entry page. He also careful to spell out any possible problems that might occur either because of the entrants location or ethics.

This contest is a very clever use of social media, but it's clearly only part of Scott's strategy. He first wants to raise his follower numbers, then he'll be able to market to those followers later. He might not even want to directly market to them, instead just informing them and keeping them close as fans (he'll undoubtedly get some because of the contest) and market to them through his web site or blog. Either way, the contest is a winner.

Can you do something like this to improve your social media presence?
Posted by Bobby Owsinski at 9:26 PM No comments:

The CD's Not Dead Yet

As much as you hear about the traditional music business being dead, I'd be careful about believing it yet. A new study by the measurement company Mint.com shows that the CD may not be as spry as it used to be, but it's still alive and more well than you might think.

The Mint chart on the left shows a number of items well worth noting:

1) The spending per transaction for CD's were way ahead of digital, which was expected, but by this much? FYE.com (a CD retailer that also owns the Sam Goody's brick and mortar chain) raked in $34 per transaction, CD Baby was $22, and the closest digital distributor was the subscription service Rhapsody. Surprisingly, iTunes brings up the rear with only $7 per transaction. That's deceiving though because it means at least 6 purchases per transaction (depending upon the price point), which is far ahead of the others.

2) iTunes transactions per month are climbing, and at a much higher rate than their digital music competitors, especially from January to July 2009. It seems that all that competition is hurting iTunes' competitors a lot more than iTunes.

3) CD sales are declining in relation to digital sales though, and that number is still accelerating. 34% of total music sales is in the digital domain, but that means that 64% are still CDs, so don't give up on the physical product just yet.

4) The reasons for the decline in CD sales are confirmed by a new study by Harvard Business School Associate Professor Anita Elberse (not seen on the Mint chart) which states the obvious:

"when consumers start buying music online, they switch from buying full albums to cherry-picking their favorite songs...each album no longer bought is "traded in" for one, perhaps two, individual songs"

All of which means that when you only buy a song or two instead of a CD or two, total music sales income suffers. But we knew that already.
Posted by Bobby Owsinski at 9:12 PM No comments:

The Current Music Industry Seen Through A Single Royalty Statement 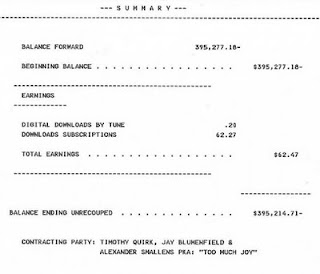 Here's another one out of the Lady GaGa digital royalty statement mold of last week. It's a great post from the band Too Much Joy regarding a royalty statement they received from Warner Records shown on the left.

The band owes Warner's in excess of $395,000 in order to recoup the costs of doing 3 records for the label in the early 90's. That's a large amount of money, but not the item that makes the post interesting.

The interesting part is the fact that the band received only $62.47 from digital earnings. Now you might think to yourself that this is perfectly reasonable, given the fact that the albums are more than 10 years old, except for a couple of things.

Tim Quirk, one of the members of Too Much Joy, is VP of Programming for the streaming digital music service Rhapsody, so he knows exactly how many plays they received and how much money was paid to Warners. The band also knows that they've received more than $12,000 from digital sales for their 4 indie albums, so why shouldn't their 3 major label releases earn more than $62.47 (this was their first accounting ever for digital sales)? And finally, there are no earnings from iTunes in their statement (the other pages are not posted, but they indicate in the post), the largest digital retailer of them all.

When Tim actually calls Warner's for an explanation, he get comments like "we have to take care of R.E.M and the Chili Peppers first," "$10,000 is nothing!" and "Too Much Joy never made us shit!" But yet Warner's owes the band a full accounting according to their contract (and every other), regardless of how upside down they are. After all, how do you know who owes who unless you get a full accounting?

With an attitude like that, it's no wonder why bands stay as far away from a label as they can in the new Music 3.0 world. Why bother? They once served a purpose in that you really needed them to bankroll your recording. You needed them to distribute your music and promote it too. There was no way you could do it by yourself.

Until now, that is, because the world has changed. You can make your own music for mere thousands of dollars instead of hundreds of thousands, and you can market, promote and sell your product just as well as any label can online (but not traditionally), and potentially make a lot more than $62.47 as well. At least you won't end up owing hundreds of thousands of dollars with no hope of every recouping.

Check out the full article on the Too Much Joy blog site for a good read with a lot more details than given here.
Posted by Bobby Owsinski at 8:42 PM No comments:

8 Of The Best Social Media Tools 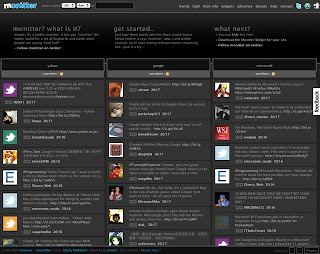 Here are 8 of the best social media tools available for musicians. Actually these are from a post on Mashable specifically designed for entrepreneurs, but if musical artists aren't entrepreneurs than no one is (especially in the Music 3.0 era). The original post contained 10 apps, but 2 of them didn't apply to the needs of an artist.

8. Monitter is a service that monitors Twitter mentions in real-time in a multi-column interface reminiscent of TweetDeck. Measurement is an important part of M30, so any tool that provides some idea of how well a social media post connects is invaluable.

7. YouTube - it seems pretty obvious, but YouTube can be used for so much more than music videos like interviews, online press kits and virtual after-show parties, among many other things.

6. UserVoice can help track and manage the feedback of your users and customers.

5. MailChimp is an online email service that offers list management, tracking and analysis, and custom HTML templates for up to 500 subscribers and 3000 emails a month for free.

4. Get Satisfaction provides a forum where your fans can get answers to questions, solutions to problems, and submit feature and new product requests.

2. Facebook - another one that everyone knows but not everyone takes best advantage of. Read the post on Mashable for helpful hints.

1. Basecamp is a great and cost-effective web-based tool for project management and collaboration that features to-do lists, milestones for important due-dates, file sharing, blog-style messaging, wiki-style writeboards, and time tracking. It's the perfect app for a busy band that has to juggle recording, rehearsals, tour dates, and social media management.

Posted by Bobby Owsinski at 8:38 PM No comments:

Who says Twitter doesn't reach your fans? Everyone found out how powerful Twitter really is a couple of Friday's ago as popular 15 year old pop star Justin Bieber's tween fans caused a near-riot at Long Island’s Roosevelt Field Mall while waiting in line for autographs. The Canadian singer was promoting his new album My World at the clothing store Justice.

So what does that have to do with Twitter?

Kids and their parents began lining up at 9 a.m. hoping to receive a yellow bracelet that would allow them to meet Bieber, but trouble started a couple of hours before the 4 o'clock event as the crowd got restless. The scene caused Bieber to tweet: "They are not allowing me to come into the mall. if you dont leave I and my fans will be arrested as the police just told us. The event at roosevelt mall is cancelled. please go home… I dont want anyone hurt."

But Jim Roppo, the IDJ label’s senior VP of sales, eventually was arrested after he allegedly sent out Internet messages to over 3,000 fans that Bieber was still signing autographs even after police dispersed the crowd.

In the wake of the incident, Island Records issued a statement: "Over 10,000 screaming fans showed up and the police and fire marshal concluded it was an unsafe environment and prohibited the event from taking place."

But Roppo spent the night in the cooler and could face charges that include reckless endangerment, criminal nuisance, obstruction of governmental administration and endangering the welfare of children because he didn't tweet that the appearance was cancelled.

Which all seems to point to the fact that Tweeting is a pretty good way to reach fans, but never leave crowd control in the hands of a salesman.