When it comes to many social media platforms, hashtags are the bread and butter of organic SEO. Finding the ones that work is always a challenge, but a number of websites can help you along the way. Here are 3 that I've found to be especially good.

1. Hashtagify.me. This is one of my favorites. Just search for a hashtag and Hashtagify.me will show you its popularity as well as other connected keywords and their relevancy (see the graphic on the left). It also shows the latest trending hashtags, influencers who use the hashtag, and the latest tweets.

2. Topsy. Topsy is a great tool to check on the popularity of a hashtag. It will give you the number of people who have used it in a tweet in increments from a day to a month as well as a sentiment score. There's also a trends chart so you can see if there are certain days when the hashtag seems to be working the best.

3. Twitter Advanced Search. I've always been big on a basic Twitter search at search.twitter.com, but its Advanced Search takes it to the next level. It allows you to zero in on a keyword phrase, a URL, a person, place or date and see the latest trends and tweets.

The next time you're going to post anything that uses a hashtag, check it out on a couple of these sites to see how powerful it is or find an alternative. It could mean the difference between someone reading your post or not. 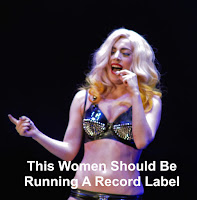 Billboard Magazine just conducted an anonymous survey of label execs and the results are interesting, to put it mildly.
The survey also asked a few gossipy questions that had many execs up in arms, the most salacious being "Who do you believe, Kesha or Dr. Luke?" Kesha has taken legal action against Dr. Luke (her longtime producer) accusing him of a variety of sexually related charges.

So there you have it, a short but interesting look into the psyche of the executives running the music business today.

Social networks are a lot like artists, bands and music - they're hot for a period of time but usually don't stay that way. This looks to be the case with Instagram, which may have already hit a plateau in terms of users and engagement.

According to social analytics company Locowise, Instagram follower growth is down to just 0.34% in July, a decrease of 77% from May alone.

Engagement was also down by 19% from May.

Both these figures are still better than Facebook, although not by much, and way better than Twitter.

That said, the days of Instagram being the hot new network on the block may be numbered.

That doesn't mean that you shouldn't abandon the service though. If your fans are there and they're actively engaging with you, then there's no reason to change your strategy.

If your posting and no one seems to be home, then it might be time to re-evaluate whether Instagram fits into your long term online goals.

Most Played Artists On Beats 1 During Its First Month

There's been some grumbling about the music being played on Apple Music's vaunted Beats 1 global radio station after the first month. For one thing, it appears that the music is repeated in 12 hour blocks so it's not truly a 24 hour station.

Secondly, it's hardly global in that almost all of the songs played are from English speaking countries. Finally, the tastes of the DJs seem to lean heavily towards hip-hop and alternative.

Here's a list of the top Beats 1 artists and how many times they were played in the first month of the station. 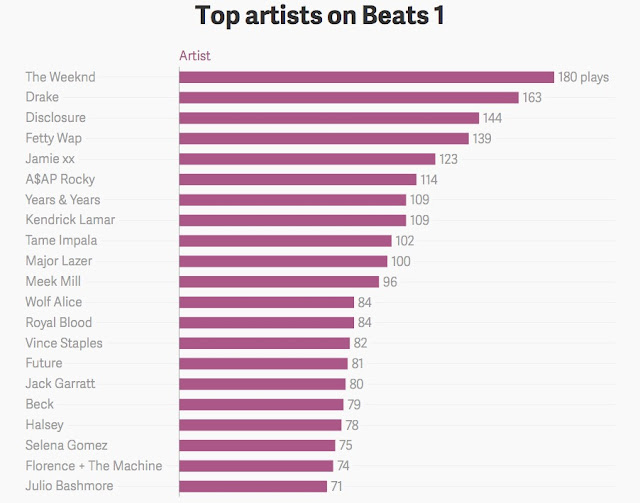 You can find a lot more interesting data about the Beats 1 playlist in the Quartz article.

This week I'm pleased to have on my podcast the go-to guy that studios big and small use to fix the sound of their rooms - Bob Hodas.

Bob has been tuning rooms for over 20 years and there's nothing he hasn't seen. From big commercial studios (like the famous Record Plant) to home studios to mobile trucks to dubbing stages to home theaters, Bob as tuned them all.

In this episode we discuss some of the common problems that listening environments have, as well as how he goes about tuning a room.

On the intro I'll take a look at the music video site Vevo and why Warner Music might finally sign on, and look a little into the pitfalls of self-production.

Any purchases made through our Amazon links help support this blog at no cost to you (just click here).
Posted by Bobby Owsinski at 4:05 PM No comments:

Universal Music To Get A Piece Of Soundcloud

Soundcloud is trying hard to go legit and if industry insiders have it correctly, a deal with Universal Music is imminent. This would be the second of the 3 major labels to license their music to Soundcloud, the first being Warner Music Group in November of last year.

As with most licensing deals these days, Universal is said to have pushed for equity in Soundcloud as well as an advance in exchange for the deal. Warners already owns 5% of the company, and it's said that Universal will actually receive a larger piece based on its market share, which is much larger than WMG.

This is a continuing trend in music distribution today where the 3 major labels will not grant a license unless they receive equity in the company. This worked out well for Warners in the Beats Music deal when Apple purchased the company, as the holding company that owns Warners walked away with a hefty profit.

The major labels are hoping that happens again with Spotify (they all hold equity), and now also with Soundcloud.

Of course, none of that income goes to the artist, falling instead to the company's bottom lines. Once again the artist only sees a trickle of the major income. Same as it ever was.