There seems to be a sudden backlash from established artists like Coldplay, Adele and Tom Waits against the whole idea of streaming their music. In fact, these artists and others have decided not to stream their latest albums on Spotify or any other streaming music subscription service.

Can you blame them? With the revenue anywhere from as little as a tenth to three tenths of a cent per stream, why bother? It's almost like legal pirating with an income that small. The irony is that these artists now want you to buy their downloads (where they make anywhere from 12 to 20 cents), where not that long ago that revenue stream was considered just as tiny when compared to good old fashioned CDs. Boy, times have changed.

While this might be a worthwhile strategy for Adele (who's sold more that 10 million copies of her album 21) and Coldplay (with their latest album, Mylo Xyloto, already at #1), who already have established fan bases, a new or up-and-coming artist still has to bite the bullet and make sure that every streaming service has their product.

Remember that in Music 3.0, your music is your marketing and the only way to develop your audience is to make sure that it's everywhere. Any time you hold back product from a potential distribution channel only makes it that much harder for people to find you.

Still, it will be interesting to see if the trend of established artists holding back songs from digital streaming continues.

If you think pop music is difficult to make money with online, image what it's like with classical music, which has always had sales that were far smaller.

It turns out that a tiny music group from the great Scandinavian North called X5 has not only made money by selling digital music, it’s beat out music giants like Sony and Warner Music on the Billboard charts.

The way the company has done it is with compilation albums of licensed material with titles like “The 99 Darkest Pieces of Classical Music” or “The 50 Most Essential Pieces of Classical Music,” which has made more than $2 million worldwide since being released in 2008. X5 has released more than 8,000 of these thematic albums (wow!) and has packaged them by composer, mood, holiday, and anything else they can think of that might be attractive to their customer. The thing is, most of their releases fall under the “classical” genre, a type of music that's notoriously difficult to sell, especially in the digital space.

But believe it or not X5 was the number two classical label in the U.S. in 2010 with a 20% market share, and had 13 #1 Billboard Classical albums, which was more than any other label except for Universal.

How did they do this? By using some simple tricks that you can use as well:


1) Their albums are inexpensive and they do everything to keep the costs down, including labor.

2) The artwork is simple but striking. Even in the digital world, graphics sell, just like with physical product (see the example to the left).

3) They distribute through every major music site and distributor, no matter how small they might be.

4) They design albums with a “music SEO” in mind. They know who their audience is and they design everything about the album around reaching him.

5) They optimize for social search (the act of finding music and albums via social networks or app search bars) since it's become the main way that a lot of people find their music.

If X5 can do that with classical music, couldn't you do the same with your music?

You can read more about X5 in this article.

How The World Uses Social Networks

Here's another great infographic from Mashable, this time showing how a few parts of the world compare in social media use.

There are a few things interesting about this graphic:

1) Except for Japan, Asian countries aren't indicated. I'd be especially interested in the numbers for China and Korea.

2) As you would think, Facebook is the most widely used social network in the world and comes in at #1 for all countries except for Brazil and Japan (where it doesn't even register).

3) But Blogger scores very high in most countries, which is a surprise. That shows that blogs are still a huge communication tool, even if you personally don't blog.

4) Where Twitter has caught on, it's widely used. It seems that either a country gets or it they don't. 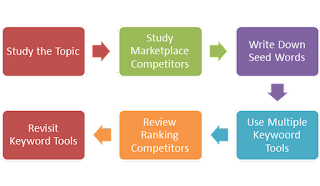 The other day I posted "7 Keyword Research Tips" and I want to continue on that theme with today's topic - 7 Keyword Selection Tips. Once again this came from an article on Searchengineland.com that I've excerpted, numbered, and added a bit of my own here and there.

By the way, on the left is a graphic illustrating the steps for researching keywords, if you need a review.
------------------------
"Once you have a list of keyword candidates, you must cull through it to find your keywords. This is where a lot of people throw up their hands and give up or try to over-simplify the process. Going back and forth between dozens of export files from different keyword tools is not practical, so it's best to use a spreadsheet to compile a master table.


1. Compile your research into a master table so you can sort it and filter it.

3. Set aside or check off relevant one-, two- and three-word phrases.

At this point, what is left will be like looking for diamonds in a trash heap. There will be lots on non-relevant words and words with too little traffic. Comprehensive research is important, but now it is time to get practical.


5. Set some limits. Depending on how much traffic the website I am optimizing receives already, I will set a lower traffic limit between 100 and 1,000. The more traffic my website is getting, the higher the limit I set. Anything below the limit gets culled.

6. Review each keyword candidate you have left. If it is relevant, mark it or set it aside.

7. At the end, copy all the keywords you marked or set aside into one table. These are your keyword candidates."

This takes a good amount of work, but it's worth it since the right keywords can get you found while the wrongs ones will bring you nothing. You can read the entire article here.

Here's one that will make you scratch your head. According to a recent study by the NPD Group, kids between the ages of 2 and 14 in the US still overwhelmingly purchase physical goods. In fact, 79 cents of every entertainment dollar goes towards physical product, and only 21 cents goes to digital.

NPD also found that most of these purchases come from music, as it accounts for 72 percent of all media, followed by movies, games, TV shows, books, and apps.

It's difficult to explain these figures, but there are four possibilites here:

1. Kids are collectors and they like physical objects to show their friends.

2. Kids buy on impulse and many times parents can't get out of a store without buying kids something - like a CD.

3. Most kids from 2 to 14 don't have credit cards (does a 2 year old even buy anything?), so that means their parents are buying for them, and they may be still steeped in the idea of a CD as entertainment.

4. Someone is very wrong here. Either NPD is way off the mark, or the conventional wisdom about kids being so digitally astute is wrong.

Frankly, I think it has more to do with the conventional wisdom more than anything. I know from the talks I give on social media (Social Media For Musicians And Engineers - or publishers, artists, or fill in the blank creative type), I'm always amazed at how little my audience knows about social media in particular and the digital world in general. Since most of these talks are in colleges, supposedly the sweet spot of the digital revolution, it makes me think that the Silicon Valley Illuminati thinks the world revolved around them, of which it has convinced the news media.That might not be the case at all, as the rest of the world (at least in the US) becomes increasingly hip to technology, but not at the same speed as we're led to believe.

Now obviously my experiences aren't with 2 to 14 year olds, but I just don't think the digital and social penetration is quite what the so called "common wisdom" would have us believe. Sure, I've seen the kids at the Apple store just as happy and engaged as can be, but is that really the case outside of the major media centers?

All I know is that studies like this make you re-evaluate just what we think we know about the digital world we live in. Some of us may be living in the future, while most are based squarely in slightly different reality.