A Strategy For Sending Out Gig Reminders

Artists, bands, record labels and anyone doing a show needs to make their fan base very aware when they're doing a gig. You can't rely on just a single email to get the word out, it takes a more comprehensive strategy. Here's an excerpt from my Social Media Promotion For Musicians book that outlines such a strategy that has proven very effective in getting people to your show.

TIP: When sending out multiple emails in a short space of time, be sure to continually change the headline and the email contents."

You can read additional excerpts from Social Media Promotion For Musicians and my other books on the excerpt section of bobbyowsinski.com.
Posted by Bobby Owsinski at 9:30 PM No comments: 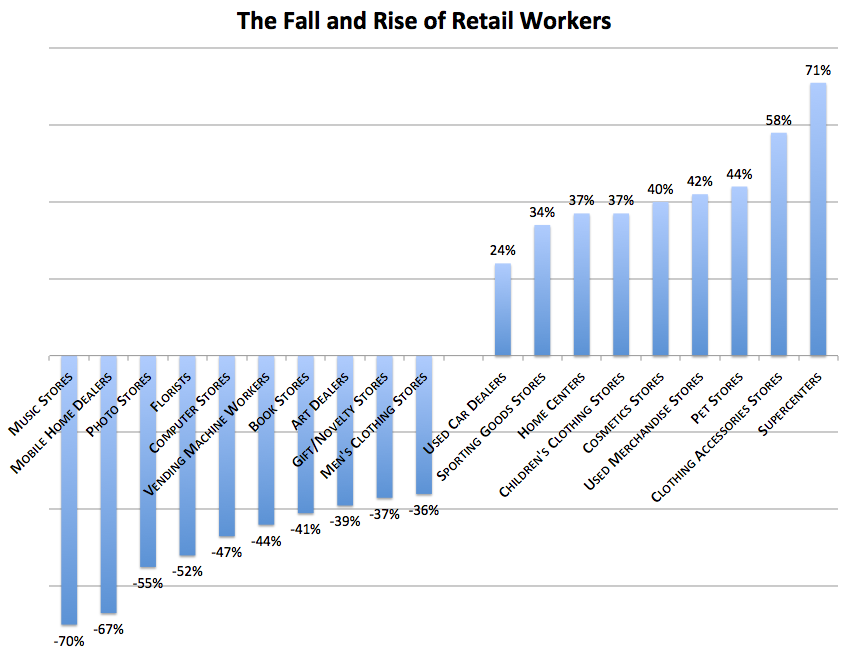 Reader Scott Culley turned me on to this article in The Atlantic about the decrease in retail jobs in the United States.

The most interesting point is driven home by the chart on the left. The part of retail hit the hardest is music stores, as you can see in the very last point on the left side of the graph.

Now keep in mind that this also encompasses stores that sold CDs, which have been virtually driven out of existence since the emergence of digital music, as well as mom and pop retail musical instrument stores as well.

The point is that the music business has felt the hit on so many other levels than just the artist and record label in the last ten years. They may not have been great jobs, but they were jobs all the same.
Posted by Bobby Owsinski at 9:30 PM No comments:

The iTunes Store Shows A Hint Of Panic

There’s talk coming from various sections of the music business that Apple’s iTunes Store will soon offer high-resolution tracks for sale, and that the introduction might coincide with the future release of three Led Zeppelin masters. The unconfirmed details have the hi-res tracks in their full 24 bit glory encoded using Apple’s lossless audio coding, and priced a dollar more than the current lossy AAC tracks.

Mastered For iTunes To The Rescue, Maybe
The fact is that Apple has been accepting 24 bit tracks at up to a 96kHz sampling rate for more than a year now in their Mastered for iTunes program (called MFIT within the industry), but the final encode for the iTunes store was still done at the lossy AAC resolution, although they sounded better due to starting with a higher quality master.

Supposedly, the hi-res track launch is in response to the fact that Apple is seriously concerned about how quickly download sales are diminishing, with Nielsen Soundscan’s Q1 report finding that downloads have diminished 13.3% over the same time last year. Apple missed the boat when it launched iTunes Radio, thinking that it was a way to increase download sales instead of realizing that people stream because they don’t want to purchase their music anymore. Now it’s faced with sales falling far faster than anyone ever anticipated as streaming gradually takes over the music delivery space.

But offering hi-res tracks might be only a temporary ace in the hole for iTunes, record labels and artists alike. It doesn’t cost the company extra to offer hi-res tracks, since most are already delivered that way, and it increases the per track revenue. The only problem is that the majority of buyers probably aren’t interested in the higher fidelity in the first place, and would rather pay the least amount of money possible if they choose to make a purchase at all. Then the fact of the matter is that many pop-oriented tracks aren’t recorded that well to begin with, or use distorted samples or loops that probably won’t provide much of a difference in the end for the average listener. Buy one hi-res track that doesn’t seem worth it and you’ll probably never buy another again. Read more on Forbes.

What Is Radio's Biggest Music Genre?

OK, quick show of hands? Who thinks that electro-pop is the biggest radio Top 40 genre at the moment? Who thinks hip-hop? How about rock? You're all wrong - according to Nielsen, it's country music.

Country music's audience has grown wider and younger in recent years, and is now poised to dominate the radio airwaves like never before. And it's kicking butt on television as well, with the recent Academy of Country Music Awards receiving its largest viewing audience in 15 years, ABC's prime time Nashville also a hit, and numerous country-oriented reality shows in the works.

One of the reasons for the format's growth is that it has embraced younger artists like Taylor Swift, the Band Perry, and Hunter Hayes more readily than in the past, which has enabled its radio market share to rise dramitically even in the 12 to 15 year old bracket. To put it bluntly, it's no longer the music of 40 year old women like it once was.

While many say that today's country is just 70s rock with fiddle and steel guitar, there's a vibrancy to it that other music doesn't seem to have at the moment. Popular music is all about cycles, and perhaps we've not seen the peak of the this latest country cycle just yet.
Posted by Bobby Owsinski at 9:30 PM 1 comment:

Streaming Up And Downloads Down This Year So Far

Soundscan's sales numbers are out and it's no surprise that the same trends that we saw at the end of last year continue, only more so. Digital and physical sales were down while streaming was way up, and the hits are doing better than ever compared with the bottom of the charts.

Here's a look at some of the most important numbers:
Even though sales are down, streaming royalties seems to be making up for the decline, which is something that was predicted would happen. In fact, if this trend continues, music industry revenue could actually rise slightly by the end of the year.

Albums continue to take a hit as well, with digital albums down by 14.2%. In fact, all genres of music posted a decline except for electronic music, which posted a modest 2.7% increase in sales.

The music business continues to evolve and the switch to streaming continues at an increased rate as consumers warm to having access to, rather than owning, music. With several new streaming services about to be introduced, it will be interesting to see if the trend accelerates even more.
Posted by Bobby Owsinski at 9:30 PM No comments: