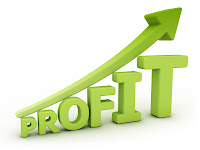 Could everyone's predictions about the demise of the major record labels be premature? What we've heard over and over in the press (and sometimes on this blog) is that the major labels were floundering in red ink, about to go belly up any second. While revenue for the industry is less than half of what it was at it's peak, and profits did take a hit for a while, it appears that everyone has missed the point that the labels have been evolving with the business, and they're pretty healthy as a result.

Case in point - according to Billboard, in the first six months of 2012 Universal Music Group, Sony Music and Warner Music Group had together reported profits of $356 million. Yes, that's profits!

Now take into account that EMI doesn't disclose their finances at the moment because they're privately held by CitiBank (at least until the sale to Universal is finalized), and the CEO of BMG Rights Management has said that their profit would be over 250 million Euros this year (about $325 million), and you can see that no one inside the big music corps are worried about their bonuses.

Then the fact that we're heading into the strongest buying season of the year makes analysts think that the major labels will make over $1 billion in profits in total for 2012.

Here's the fact as it stands today - DIY is great for any artist that's either starting out to even a star level, but if you want to break into superstardom, you still need a major. They're the only ones with the infrastructure to take an artist to those heights, at least at the moment.

That said, the more you DIY and the stronger your audience, the greater your bargaining power is. It's almost like there's no middle ground these days when it comes to making a major label deal. Either you're completely at their mercy with a 360 deal or you have all the leverage because you've built an audience without them.

Whatever the case, the major labels are not going away any time soon. Now if only we had a new crop of indies.

We're learning more and more each day about the planned Pandora-like streaming service planned by Apple (see this post for more info). It appears that Apple is still in discussion with the major labels on the license fee that they'll be paying, which is complicated by the fact that Apple wants to implement some interactive features in the product to distinguish itself from either Pandora or iHeartRadio. This is a complicated issue on so many levels, but suffice it to say that Apple wants to pay the least it can while the labels want the most.

It's been reported that the labels are also demanding a couple of things besides the license fee:


1. A way to refer listeners back to the iTunes Store (like a "Buy" button) to stimulate sales so that the streaming doesn't cannibalize it. I'm sure that Apple would like the same thing, but once this streaming cat is out of the bag there's no reason to own the song any more. In fact, Pandora has the same thing and it's been reported that it hardly throws off any revenue.

2. The ability to program tracks to fit the listener's profile, which they can't do now with Pandora.

2A. There's been some talk of even allowing programming on a geographic basis, which is perfect for an indie artist or band just building an audience.

You can bet that this is going to happen sooner than later despite the fact that Pandora has a huge head start. iTunes has a global customer base of 465 million users, and there are 335 million iPods, iPads and iPhones out there, so their potential reach eclipses everyone else in the market. The problem is, this will be another nail in the downloadable music coffin as consumers get more and more used to renting music instead of buying it.

Here's a great chart that comes by way of Digital Music News and merchandise manufacturer Jakprints on the 20 most profitable merch pieces. As you can see, patches and stickers have the largest profit margin, normally costing 20 to 40 cents and selling for $3 to $4, but they're also a great giveaway as they're small, which makes them an ideal promo item. Unfortunately, most artists/bands think of T-shirts first when it comes to merch items, while some of the other items on the chart can be a far better promotion and better revenue source. 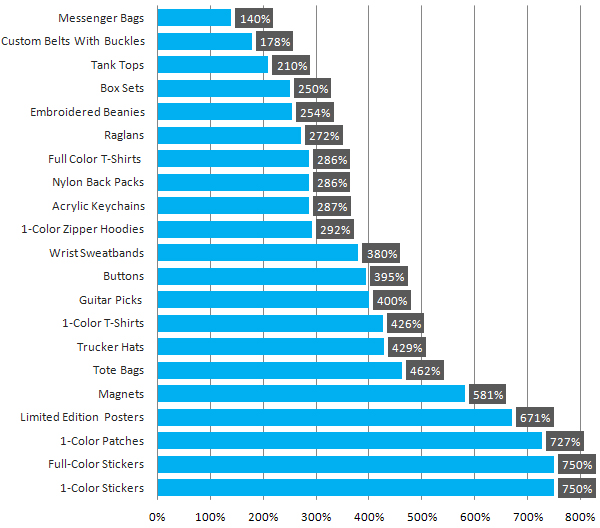 I rarely cross-post to this blog from by Big Picture production blog, but I thought that this topic is worth it. It's about a new online music delivery format called Bronze that's pretty interesting. Is it "take over the world" interesting? Probably not, but I think that there will be a place for it in many genres of music in the future.

Why? I'm glad you asked. Bronze is the first format that can alter the mix of a song with each playback. It's non-interactive, so the user has nothing to do with how it's played back, but each listen is different, just like a live performance.

Supposedly the chance of hearing the same version twice is about the same as winning the lottery, and it's not possible to freeze any version to listen to it again. Just like a live performance, once it's gone, it's gone forever. That said, it's possible for an artist to continue to update a song with new tracks long after it's been released. Considering that some of the artist's that I've worked with in the past can never let go of a song, this could certainly cut down their overall output of songs.

Regardless of if you like a song or not, Bronze is probably better suited for some musical genres than others (think electronic music). As a mixer, I'm pretty suspicious of the format, since what we do is to try to freeze a moment in time, but as a consumer, I'm very intrigued. A great mixer can bring certain things to the table that makes it a hit that you might not have in another mix. On the other hand, if you really dig a song, you'd probably want to listen to it over and over to see how it would change every time. That said, that means you'd probably not want to look for new music as much, since the music you already know is somewhat new every time.

That said, as a business, Bronze probably doesn't make much sense. A record label sells a frozen archive as a product, so this wouldn't appeal to them. And legally, how to you copyright a product  that's not a fixed recording?

But the idea of Bronze is pretty cool in that it's a unique use of existing technology. Now let's see if anyone will play along. The first song released in the format is by ex-Golden Silvers frontman Gwilym Gold called "Flesh Freeze." Check it out on the Bronzeformat.com website.

Even The Boss Has Trouble Selling Tix

In what may be indicative of the new realities of the music business, it looks like there's some consumer push-back to high concert ticket prices once again. If you remember, this is a trend that began during the recession/depression days of 2008, but last year saw a bit less consumer resistance to the high ticket prices that have become the norm.

A great indicator of this is the fact that even Bruce Springsteen, The Boss himself, has had to discount tickets in order to get a sellout in his own back yard of New Jersey at MetLife Stadium. Bruce's promoter decided to use LivingSocial, a competitor to Groupon, to provide a special $59 ticket to its members (prices were $82). Despite the 28% discount, the offer only drew 65 buyers by the end of the first day.

Bruce isn't the only big act that's having ticket problems though. LivingSocial has also done deals with the Black Eyed Peas and the joint dates by Kenny Chesney and Tim McGraw, and many other acts like Madonna and even Eric Clapton are struggling to sell out.

But if there's one artist who isn't, it's former Pink Floyd bassist Roger Waters, who's "The Wall" tour has grossed over $160 million so far, which is about double of his closest competitor, who happens to be Springsteen.

So what does this mean? First of all, the economy isn't great and it's a real struggle to pay for a concert. With the average ticket going for around 60 bucks, it can easily double after the "convenience charges," parking, and beverages are added. What would you do if given the choice of putting gas in your car to go to work or buying a concert ticket?

The next thing is overexposure. Most acts make all of their money on the road, so if they want the revenue to continue, they better keep working. The problem is that you just can't come back to the same venue year after year and expect the same turnout, especially at those prices.

The recorded music side of the music business has undergone a paradigm shift that it still can't get its arms around. I predict that the next sector to see such a major change will be the concert business.