The Changing Face Of Mobile 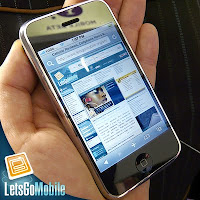 One of the truisms of our modern age is that just as soon as you think you have a handle on something, you can bet that things have changed and moved on. So it's true with the mobile space, as pointed out recently by Mike Walsh, a leading authority on consumer innovation and our digital future, at a METaL breakfast that I recently attended. He's written a great book called Futurtainment

that looks deep into our present to see the comes next.

Among the many things Walsh talks about in the book is the generation known as "the naturals," who have never known anything other than the internet. It turns out that kids age 16 and younger use their phones differently from the rest of us. They communicate in short bursts, and are perfectly at home with text messaging and social networks, which they prefer to use rather than old fashioned talking or even email. In fact, social networking is such a huge part of their lives that internet addiction clinics are beginning to pop up world-wide as demand outstrips the supply. Yes, there can be too much of a good thing.

A great example of how mobil technology has changed some cultures comes from Turkey, according to Walsh. There's an old Turkish proverb called “At, Avrat Silah,” that translates into "Horse, Woman, Gun." Once upon a time, to be a real man in Turkey you had to have a horse, a woman and a gun, which Turkish men were willing to flaunt to show their manhood. The bigger the horse, the more beautiful the woman, or the bigger the gun, the more powerful and respected the man. Today the horse is now the car. Getting the woman requires you to be adept at Facebook (Turkey is one of the largest social network users in the world), and the gun is now the smartphone. The better the phone, the bigger the gun. According to Walsh, “When Turkish men meet, the first thing they do is put their phone on the table.”

The phone has already began to change the culture in a new way in the rest of the world (and it will change here soon as well) as it also becomes your wallet. With the addition of NFC (Near Field Communication), it's now possible in some parts of the world to swipe your phone near a reader to purchase purchase everyday items like subway and bus fares, food items, and nearly everything you can think of. You'll see more of this in the US in the next year.

While many of the tech savvy are still tied to their laptops, the rest of the world is moving on as their phones become their computer. As the mobile world changes, will you be left behind?

Be sure to check out Mike Walsh's website and book site for a real treat.

Yesterday I had the pleasure of addressing Dr. Mark Waldrep's music business class at Cal State Dominguez Hills in Carson, California. They were a great group of people, but I was a bit surprised how little they knew about social media marketing and branding, but I guess that's why so many colleges use my Music 3.0 book

as part of their course. One of the social mainstay's that many of them weren't into is Twitter, which isn't a good thing from a promotion standpoint, but might be a benefit as a student.

As luck would have it, this morning I was greeted with an email from Cathy Vance, who suggested the following infographic about students and social media. It shows how Facebook and Twitter can have a negative effect on grades and making money. That said, I advocate using both as a promotional tool if you're an artist, producer or engineer, which is a completely different application.

Here's a great slideshow from Hubspot regarding some stats about Twitter that you should know. I'm a big proponent of Twitter for marketing as I've seen it work first-hand. At least a third of the traffic to both of my blogs comes from Twitter.

Check out my Big Picture blog for discussion on music, engineering and production tips and tricks.
Posted by Bobby Owsinski at 9:38 PM 2 comments:

The Myth Of Streaming Royalties

Nearly everyone in the music industry believes that someday in the near future, the music business will change from a digital download business to a streaming business, with listeners subscribing to a service like Rhapsody to essentially rent their music instead of buy it. Subscription is something that the record labels desperately want, the idea being that getting a steady $10 a month from say 10 million people is a pretty good steady income and better than the ups and downs of CD and download sales.

Of course, the problem here is that it's good for the record labels, and not that good for the artist. How is that money divided up? How much will the artist make in the end? Do recording contracts even cover this scenario? Does the artist get paid like a songwriter does from ASCAP or BMI?

What may be a window into the future lies in a statement made by David Renzer, chairman and CEO of Universal Music Group Publishing at the Association of Independent Music Publishers (AIMP) earlier this year, according to Digital Music News.

That means that a song with a massive amount of traction like Rebecca Black's "Friday" will only received $3,405 for 112 million views.

Don't forget to check out my Music 3.0 blog for tips and tricks on navigating the music business.
Posted by Bobby Owsinski at 9:33 PM 1 comment:

FanTrail - The Next Phase Of Music Social Networking?

The recent South By Southwest conference saw a new kind of social network for musicians debut called FanTrail. It's a new kind of network based on a free iPhone app that not only allows artists to reach out to the fans, but to tap into their highly useful and valuable social information.

One of FanTrail's features, called LoveMail (kind of a dorky name) allows musicians to record short audio messages to fans, which is certainly a lot more personal than a text message that might be ghostwritten. Another feature, LoveMeter, ranks fans loyalty by measuring their music purchasing and concert activity, which could be a data goldmine during a marketing campaign.

According to an article in the New York Times,


"Using FanTrail, artists can tailor messages or commercial offers to specific groups of fans, identified by location or LoveMeter ranking. For instance, a band touring in Chicago might invite only its biggest fans there to a secret show, or offer them premium merchandise. A virtual tip-jar allows artists to collect extra money from fans or raise donations for their favorite cause.

Calling it a “psychographic GPS,” Richard Nichols, the manager of The Roots, imagined that FanTrail could be used for advanced forms of crowdsourcing like testing out new tracks on only the biggest and most loyal followers."

Other similar mobile services are beginning to pop up. Skygrid Groups and Mobile Roadie also have apps built specifically for artists to reach out to fans via their smart phones.

It's good to know that social networking continues to evolve, although some of the bigger networks do show some signs of stagnating a bit (Facebook anyone?).

Check out my Big Picture blog for discussion on music, engineering and production tips and tricks.

Posted by Bobby Owsinski at 9:35 PM No comments: