If you want to listen to Kanye West's new album The Life of Pablo, there's only one place online and that's Tidal. The problem is that after the 30 day trial period, you have to start to pay for the service, either at the $9.95 per month premium rate, or the more spendy $19.95 per month rate for the CD quality Tidal Hi-Fi.

Fearful of losing a chance at upselling trial subscribers that signed on just to listen to the album who's time has run out, Tidal has extended it's free trial period by 30 days.

There are probably a couple of reasons for this. First, Tidal screwed up Kanye's TLOP launch by not reporting it's numbers to Billboard, resulting in the album not even charting when it was released. Whether this was because the numbers might have been embarrassingly low, or just a human error hasn't been determined.

The second reasons might be that Tidal owner Jay-Z is reportedly looking for either a partner in the platform, or a straight buy-out. Any subscriber attrition, even those on free tier, looks bad, so it's in the company's best interest to bite the bullet and add another free month rather than have the numbers decrease.

One interesting thing is that Kanye and his producers keeps changing TLOP even after it's been released, which may be the wave of the future in terms of production. Hit the release deadline and perfect it later in the form of updates may become the norm before you know it.

Get More People To Watch Your Live Video Streaming

Live video streaming is pretty hot these days, and most of the major social platforms allow you to do it. The problem is that you only get a small portion of your available fans when streaming in just one place.

While it's possible to embed your player on a number of websites, that's a pretty time consuming process, and that's where StreamSpread comes in.

StreamSpread is a new network that finds compatible websites for you (called "publishers") so you can get your live stream out to more people. You have to pay for this service (you're an "advertiser") at a rate of either $5 per 1000 views or $0.03 per hour viewed, but you can quickly and easily expand your audience.

The service works with a stream you create from Ustream, Livestream or Twitch, and provides analytics such as number of viewers, time watched, viewer geolocation, concurrent views, and viewer's browser and device type.

You can also filter the categories of the websites that will serve up your stream to make sure that you target the exact audience for your message or music.

Here's a brief video below that explains the service. 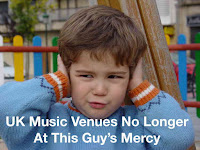 It looks like the task force set up by London mayor Boris Johnson is actually having some effect, as tweaks to planning legislation may actually help to save some live music venues.

Alarmed by the closing of some of the most popular clubs in the city, the mayor took action last October in an effort to save its remaining music venues. The impact has spread to the entire country though, as the Music Venue Trust announced that new legislation would be put in place specifically to deal with noise complaints that threatened many successful music venues.

With many cities sections undergoing gentrification, it was not uncommon for a new apartment or condo building to be built beside a long-standing music venue. When new residents moved in, they complained about the loud noise and large crowds of people, in many cases causing a successful club to close.

The new tweak in the legislation requires a developer to consider the impact on the new residents before applying for any building permits, and ceasing development if the impact will be too great, thereby saving the venue.

Something like this happens so rarely that it feels good for musicians and venues to finally get a win. Now if only more localities around the world would adopt the same attitude, the music industry would be a lot better off.

Here's a great overview of the situation from DIY.

Their tastes in music is also different, as they listen to more pop, hip-hop and R&B than other music consumers (check out the chart below).

They're also more than twice as likely to pay for a premium streaming tier than other users.

The upshot: if you're not on Instagram already, it's time to sign on, as there are a lot of music fans there. 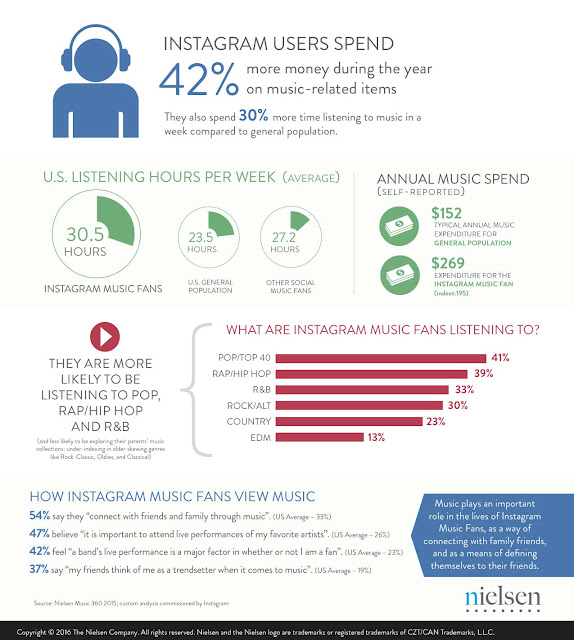 Two Year Anniversary With Episode #100 Of My Inner Circle Podcast

Today is a joyous occasion in that it's the two year anniversary of my Inner Circle Podcast!

I want to thank you all for your support of the show. I don't make any money from it, but I love doing it as long as you find it interesting and useful.

For episode #100 I welcome back the great studio and live engineer and my good friend Dennis Moody, who was my first guest and also first anniversary guest on episode #50.

Dennis will talk about the changes in venues around the world, especially after the latest terrorist incident in Paris. Dennis arrived there on tour shortly after the event, and he'll describe what it was like.

In the intro I'll take a look at how the once promising Tidal streaming network is currently in trouble and why, as well as some of the unique and interesting vintage gear finds of late.

You'd think that with so much music existing in the digital domain that it would easy to track down the usage and royalties for a song, but unfortunately that's still not the case. Despite calls for the recording industry, there's no one single search engine that can find that data, but SoundExchange recently came up with a step in the right direction.

SoundExchange now offers an online tool for looking up the ISRCs, or International Standard Recording Codes, that are related to the nearly 20 million recordings in its database.

ISRC codes have long been the standard method for identifying sound recordings, first being introduced in 1986. Each code number is comprised of a two-letter country code, a three-character code for the registrant, two numbers for the year, and five numbers assigned by the registrant. The RIAA oversees the ISRC system in the United States and its territories. The IFPI oversees ISRCs globally.

SoundExchange's search engine allows you to look up an ISRC code by artist name, song title, album, year, version and UPC/EAN. The result can be added to a cart for future reference, which can then be exported to a CSV file so the data can be inputted to a digital service's system. The IFPI also provides a lookup tool it created in conjunction with SoundExchange with identical information.

SoundExchange collects royalties for non-interactive streaming platforms like Pandora and satellite radio only.

As said before, this isn't the ultimate solution that everyone has been wanting, but it's the best solution so far in that it provides cross-check information to make sure that copyright owners are being paid at least in some areas.