Spotify has teamed up with a company called Genius in an effort to try to take using the platform to the next level.

G enius provides annotated song lyrics, backstory and commentary that pops up as you stream a track via special "Behind The Lyrics" playlists.

The commentary comes from the artists and is not crowd-sourced or user generated. This allows artists to stay more connected with their audience without having the work required of a social platform.

The feature is just being rolled out, with the "Behind The Lyrics (Hip Hop)" as the first playlist.

What's especially interesting is that the feature will be available to both free and premium users, which seems to show that Spotify is a bit insecure with its current top position in the streaming world.

With Apple Music's recent leak about its 10 million paid users and Pandora's pending purchase of Rdio's infrastructure out of bankruptcy, this seems to be a pre-emptive strike to either keep its current users from thinking about another platform, or lure some new users away from the others. Either way, Spotify wants to keep as many eyeballs, free or paid, glued to the service as possible, and the connection with Genius is another step in doing so.

Who's The Biggest Label?

With the latest Nielsen music figures in for 2015, we begin to see the full picture of the music industry. One piece is how the major labels fit into the grand scheme of things, and Nielsen kindly hands us that info in a very digestible way.

So what's the market share of the majors and indies?

1. Universal Music Group has the largest market share by far at 38.5%

Indie labels can be looked at another way though. That 12.6% is for labels that are wholly operated and distributed. If you look add indie labels who have distribution through one of the majors, you find that their market share soars to 34.4% of the business.

Although most of the money is made by the 3 remaining majors, indie labels are still the lifeblood of the industry, and play an important part in the development of new artists.

It looks like Apple Music has beaten the predictions by making it to 10 million subscribers much faster than anticipated. Although no official announcement has been made, the Financial Times has confirmed that Apple has achieved that number, proving that the 90 day trial period for the service appears to have worked.

In contrast, it took Spotify 6 years to get to that number, although that was well before streaming became a common practice.

Speaking of Spotify, rumors are that its paid subscriber numbers have risen to 25 million users as well.

All this spells great news for artists, bands, labels and publishers. Just from those 2 services, there are more than 15 million more paid subscribers than last year at this time, which would be about a 30% increase.

Of course, we've yet to hear about YouTube Red's subscriber numbers yet, the $9.95 per month service that eliminates adverts from your videos. That could also give those subscriber numbers a boost, although the feeling is that if the numbers were actually that good the company would be boasting about it already.

Regardless, it looks like streaming has at least turned a small corner as more and more people are finding value in paying for their music than getting it for free. 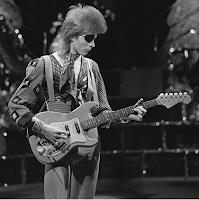 “David had a few demos prepared for the album, but interestingly two of the songs that he decided to record were actually from that first day I reconnected with him (the day of the possible wardrobe malfunction nightmare) when he produced Freddi Burretti - “Moonage Daydream” and “Hang On To Yourself.” Even though David had originally written these songs for Burretti and not for himself (they had been eventually released under the name of Arnold Corns), David thought they might fit nicely in this record, and they did. One song that eventually made the record, “It Ain’t Easy,” had initially been considered for another album. It was a leftover from the Hunky Dory sessions and so was the only track on Ziggy that Rick Wakeman played on.

As with Hunky Dory, what was to become Ziggy was recorded at Trident [Recording Studios in London] in about two weeks, with another two weeks for mixing, but this time we had moved from 8 track up to the relative luxury of 16 track, thanks to the addition of a brand new 3M M56 tape machine. The sessions themselves weren't much different to any of the other Bowie sessions. The basics took about 4 or 5 days and were virtually the same for every track. It was only the nuances in each song that would vary. What’s more, nothing was recorded 100% live. There were overdubs on every track, and as is usually the case, some more than others.

There were a lot of tracks recorded for Ziggy that didn’t make the album ( most of them I had forgotten about until I began mixing Ziggy for 5.1 release recently) - “Velvet Goldmine,” “Bombers” “Holy Holy” and Jaque Brel’s “Port of Amsterdam”. If I remember correctly, for “Velvet Goldmine” we put a lot of work into it and so it was fairly finished, “Bombers” was only somewhat finished, “Port of Amsterdam” was David with just an acoustic guitar, and “Holy Holy” was only a basic track and I don’t think we even got a good one. Originally one of the tracks intended for Ziggy was “Round and Round,” the old Chuck Berry rock n’ roll classic. Now that one had the least number of overdubs of all the songs that weren’t strictly acoustic and was completely finished.  It was actually supposed to be on the album until RCA decided they needed a single and that was the track that got kicked.

As I said before, David is an amazing singer, and 95% of his vocals on Ziggy and every other album I recorded with him were done in a single take. There was one completely calculated exception however. In the first part of the song “Rock And Roll Suicide” David sings very quietly, and so in order to optimize the sound quality, I had to crank the level of the mic preamp. He eventually becomes a power house and his vocal range was quite different for the latter part of the song, so I had to readjust the levels to compensate for that, hence the vocal for that song was recorded in two parts - each part a first take of course. I learned not to expect anything different.

As with everything Bowie, there are lots of myths and misconceptions and the so-called “sax section” on “Suffragette City” is certainly one of them. The fact of the matter is that it’s not a sax section at all, but a synthesizer. We thought we had finished the song but, as these things often go, it was lacking something. I'd been spending a lot of time messing with the ARP 2500 synthesizer that Trident had recently purchased and suggested we give it a try. I got the sound, and Ronno played the part that David came up with. We were not specifically going for a sax sound and to me it sounds nothing like saxes so it always surprises me when people tell me they thought it was a sax section. Then of course came the really big surprise when David told American DJ Redbeard during an interview that he played all the saxes in the song, but then again, lest we forget, we’re talking about Mr Bowie. One can never tell if he really didn’t remember or he was just telling the interviewer what he wanted to hear.

Of course there’s always a favourite track and on Ziggy it’s “Moonage Daydream”. All the songs work for me but that one just works a couple of percent more for some reason. David has said in interviews that he’s always been like a chef. He takes ingredients from all of the music that he’s heard, mixes it all together, and it comes out being his own. In this case, he took an idea from the B side of the 1960 Hollywood Argyle’s #1 hit “Alley Oop” called “Sho Know A Lot About Love,” where a baritone and flute play the same line together (well, a couple of octaves apart, but I think you know what I mean), and used that same concept for the solo of the song. The only difference on “Moonage” being that it was a recorder not a flute playing with the bari, both of which David played.

He was incredible in that he’d see a trumpet or an accordion or some other instrument in the studio and say, “Let’s find a way to put this on there.” We were so into rock and roll and wanted to remain true and pure, and we’d think,”Oh, God (covers his eyes and hangs his head), he’s not going to put that on it?” He’d do it and place it somewhere back in the mix and it would work. That amazed me.

The same with takes. We’d do the second take and feel, “Now I know the song,” and he’d go, “That’s the one.” We’d all argue that we could do a better one but he’d say, “No, that’s the one.” After a while we’d begin to think, “We’d better get it by the second take.”Woody Woodmansey [Spiders from Mars drummer] 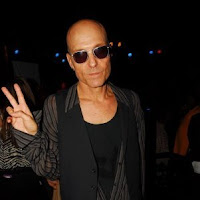 The studio business has changed drastically in recent years and it's been especially hard on studio musicians.

My guest this week is Los Angeles studio bass player Paul ILL (Pink, Tina Turner, Gwen Stefani, Courtney Love and many more) who gives us a sense of being a studio musician in today's new music world.

In the intro I'll discuss the significance of dipping into Virtual Reality for concerts and videos, the surprising year-end Nielsen music sales and streaming data, and why a major defense agency is going back to vacuum tube technology. 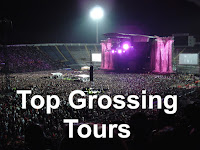 One of the cool things about the music business in 2016 is that it looks like analytics have finally caught up to the business to the point where it doesn't take months to get the big picture. It used to be February or March before we would see yearly sales figures, but now we're seeing them within the first couple of weeks in January.

A good example of this is Pollstar's annual top grossing tours. Here are the 20 tours that made the most money in 2015.

A couple of quick notes.