Will The $7.3 Million “Blurred Lines” Verdict Kill Songwriting As We Know It? 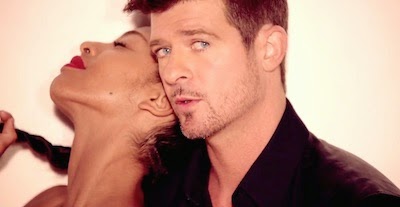 The jury awarded the estate of Marvin Gaye more than $7 million today in a copyright infringement decision against artist Robin Thicke and songwriters Pharrell Williams and T.I. over their huge 2013 hit “Blurred Lines.” The jury decided that the song was just too similar to Gaye’s 1977 hit “Got To Give It Up” to be a coincidence, even thought that’s probably exactly what it was.

This is just another example of the blurred line (pun intended) between a copy and an influence that permeates not only modern music, but just about any creative endeavor.

We’re all influenced by the art and/or craft that we love, and that influence seeps into our every creation whether we like it or not. Sometimes in music it’s totally obvious (the famous George Harrison “My Sweet Lord” vs. “He’s So Fine” by The Chiffons lawsuit), and other times its less so (Sam Smith’s “Stay With Me” vs. Tom Petty’s “I Won’t Back Down”), but with only 12 notes and a limited number of chord progressions that are pleasing to the Western ear, one might think that it’s surprising that there aren’t more lawsuits for copyright infringement than there already are.

Take the blues, for instance. Pick just about any blues album and you’ll find that not only does each song liberally borrow from countless blues songs by countless blues artists before, but even from songs on the same album. 12 bar blues is that for a reason, and although it’s nice when there’s a variation, you won’t find too many artists messing with a formula that’s worked for 75 years. Do we see any copyright infringement suits there? Read more on Forbes.
You should follow me on Forbes for some insights on the new music business, Twitter and Facebook for daily news and updates on production and the music business.

One argument states 'there's only twelve notes so similarities in songs are inevitable.' This is basically true, especially in consideration of chord sequences/progressions. But mainly the rhythm and actual melody lines of these songs are what separates them most noticeably.

And granted, every popular song is influential and inspirational to some degree.

However what's overlooked the most in this debate is the actual intent. Being influenced and inspired are very different to plagiarism. Plagiarism can be defined in two ways; outright theft or just plain laziness.

Being ignorant isn't an excuse either. "Oh right, I forgot about that song. Yeah it does sound like it." With enough self-discipline, time, effort and self-awareness one doesn't have to compose a song that even closely resembles another. That's the true, enigmatic and even magical nature of Music itself - that so much has already been and continues to be created.

Despite still loving many of my favorite bands, over the years I've lost some respect for them after learning quite a few are blatantly guilty of intentionally stealing the 'meat and potatoes' of a song, only to incorporate it into their own, which became a hit for them, or at least far more popular than the original version. And many times stolen from a lesser known artist as well.

I won't name any names here, just dial the topic up on the ever omniscient Google. You may discover some tarnished heroes of your own...