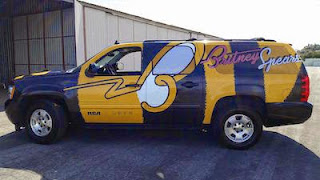 It seems that the car service Uber is becoming more than a taxi. It's also a way to deliver and even break new music to fans.

Britney Spears released her new single "Pretty Girls" on May 3rd using Uber as the "vehicle" to get the word out. She jumped on Twitter and Facebook during the day telling fans that they could be the first to hear the song in in Los Angeles and wanted to take a brief joy ride to have a listen.

At midnight Uber customized SUVs were available free for up to 30 minutes to those that registered, who could then hear the song before anyone else.

Fans were told to open up the Uber app on their phone between 3 and 9PM, then enter the promo code PRETTYGIRLS in the promotions section to unlock the Britney vehicle option. Winners were on a first come, first serviced basis and were also then eligible to win a prize of 2 tickets to a Britney concert.

Whether you like Ms. Spears and her music or not, you have to admit that this promotion is pretty good out-of-the-box thinking. It combines a nice combination of new and old technology to do what promotion departments have been doing for a very long time - breaking a song.

That being said, the song wasn't exactly a smash, reaching only #29 on the Billboard Hot 100 chart, proving that even a good promotion can't make a hit if the song isn't killer to begin with.

Hmmm, didn't radio used to do this?